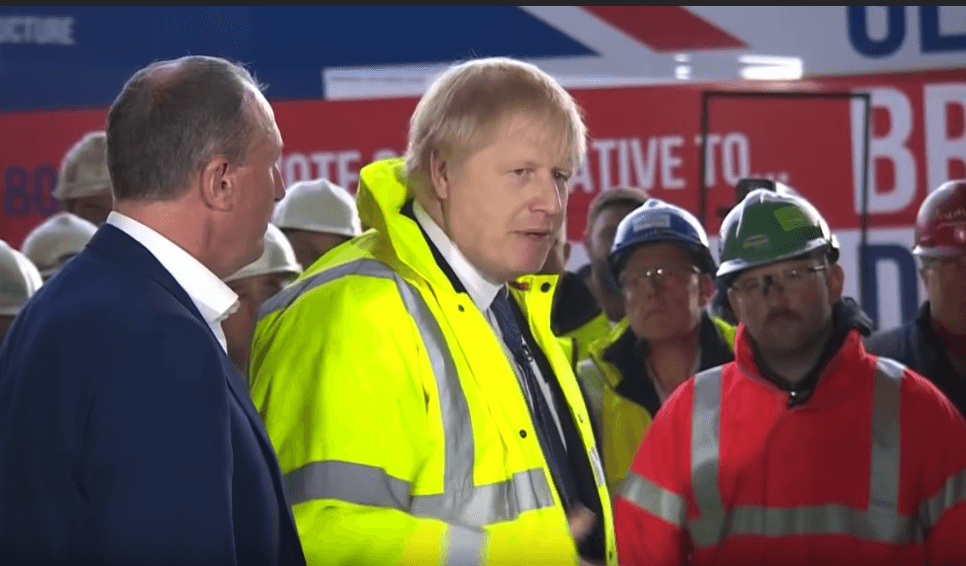 While the British Pound remains the best performing major currency over the course of the past month on increased market expectations of a Conservative majority at the December 12 election, the past week has however seen the Pound underperform a number of its largest rivals, particularly the Euro.

While losses aren't substantial, at the very least it can be said the rally that took place in the first half of November has run out of steam as lingering doubts over a possible Conservative majority on December 12 remain prevalent.

In fact, the Pound-Euro exchange rate looks set to suffer its first weekly loss against the Euro in a month, and only its fourth weekly loss since mid-August, with further declines possible according to the latest research from technical analysts. 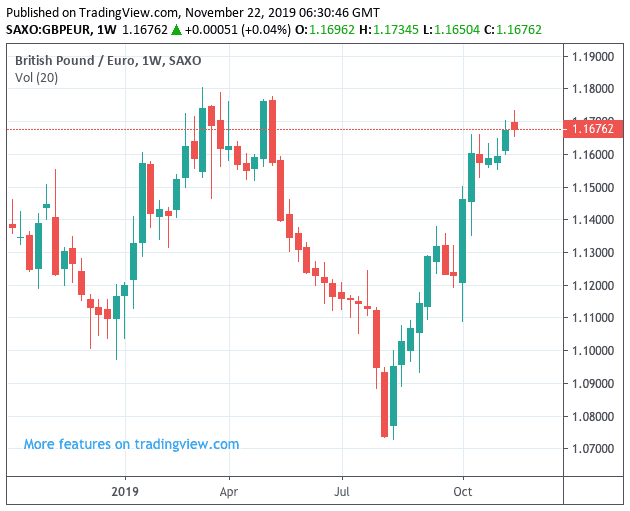 Above: Sterling has risen against the Euro in 11 out of the past 15 weeks as 'no deal' Brexit fears faded and expectations for a Brexit deal eventually being approved rise.

"The outcome from the UK election is a risk factor for the Pound and European currencies," says Derek Halpenny, Head of Research for Global Markets EMEA and International Securities at MUFG in London. "If the election delivers a hung parliament, market participants could initially become more concerned over the return of 'no deal' Brexit risk by the end of January."

A hung parliament could cause markets to question whether 'no deal' still remains an unlikely outcome.

The House of Commons has a new Speaker in Sir Lindsay Hoyle, it is unclear whether he will be willing to bend Parliamentary procedure as did his predecessor John Bercow in order to allow for the passing of legislation that ultimately forced the Government into accepting another Brexit extension.

Early signs suggest Sir Hoyle will run Parliamentary business in a more traditional fashion and the rule book is unlikely to bent to the same degree as it was under Bercow.

The market has bid Sterling higher since August as expectations for a 'no deal' Brexit - seen as a worst-case scenario outcome for the UK economy and its currency - have gradually faded.

"The most important development underpinning Sterling strength of late has been the reduction in the risk of a no-deal, disorderly Brexit. With the Conservatives campaigning on the basis of their deal, and the next two most popular parties (Labour and Liberal Democrats) in favour of either a soft Brexit or Remain, there is no obvious path now to a disorderly Brexit," says Georgette Boele, a currency strategist with ABN Amro, the Dutch based international investment bank.

Therefore should expectations for a 'no deal' start to rise again, Sterling could fall rapidly and resets the August lows recorded against the Dollar and Euro.

"A hung parliament would prolong the uncertainty and once again raise the tail risks of both 'Remain' and 'no-deal'," says Michael Cahill, a currency analyst with Goldman Sachs. "We expect the heightened uncertainty would essentially reverse the recent inflows and push cable back to 1.25."

A Route Back to 'No Deal'

The next crop of Conservative MPs will likely be more committed to delivering Brexit than the Conservative's previous parliamentary party which contained MPs who were willing to resign their party membership over their personal Brexit stance, which ultimately weakened Government attempts to meet the previous October 31 deadline.

"All 635 Conservative candidates standing at this election – every single one of them – has pledged to me that if elected they will vote in Parliament to pass my Brexit deal so we can end the uncertainty and finally leave the EU," Prime Minister Johnson told the Telegraph newspaper in an interview published last weekend.

Any failure to pass the Brexit deal under a hung parliament could see the Conservatives then opt to prevent another Brexit extension in order to deliver Brexit by any means possible.

However, such an outcome would require the support of MPs from other parties, this is where the number of Brexit Party and DUP seats in the next Parliament plays a significant role.

Both the DUP and Brexit Party would not aid the Conservative in passing their Brexit deal, but they would unite with the Conservatives to thwart another Brexit extension.

The likelihood of this outcome is of course hard to predict, but what matters from a currency perspective is that a hung parliament = uncertainty, and currencies tend to fall when uncertainty is on the rise.

"A continuation of Parliamentary deadlock would require another Article 50 extension as Boris Johnson’s Brexit plan would be unlikely to pass. Calls for a second referendum to break the deadlock would eventually begin to increase. The additional uncertainty would be an unwelcome development in the near-term for the Pound and Euro against the U.S. Dollar and Yen," says MUFG's Halpenny.

Markets Could be Underestimating the Risks of a Hung Parliament

A 'no deal' could therefore once again become a fear for markets under a hung parliament scenario, something that would hurt Sterling.

What are the odds of a hung parliament occurring though?

ABN Amro's Boele says, "we also think markets might be underestimating the risk of another hung parliament, for two reasons:

"1) the Conservatives had a similar poll lead at this stage in the 2017 general election, but ultimately lost much of that lead in the course of the campaign – this could yet happen again, with the election still nearly a month away on 12 December;

"2) the UK’s first-past-the-post electoral system complicates predictions of parliamentary seat share, as the number of seats won depends on how votes are distributed regionally. In other words, the Conservatives could still end up without a majority even if they got the highest vote share."

Jordan Rochester, a foreign exchange strategist at investment bank Nomura says he is surprised by how limited the rally in Sterling has been of late.

"The market is on balance inclined to believe the polls, but is still scarred by the 2017 experience to fully commit to the Tory majority scenario until closer to the time. It doesn’t help that from a polling trend perspective, it looks spookily like 2017 again with both Labour and the Conservatives marginalising the smaller parties and enjoying a 'day one' bounce," says Rochester.

Why Sterling Likes the Idea of a Conservative Majority

While Sterling has seen some of its multi-week strength fade, it still does hover towards the top of its recent range against the Euro and a number of other major currencies. This is because the market still attaches a 65% probability of a Conservative majority taking place. A secure Conservative Government will allow for the swift passing of the EU-UK Brexit deal, putting to end years of speculation over the matter of how the UK would exit the EU which has held back the potential of UK business, and the currency.

"The Tory party are currently expected to win a majority and then quickly pass Boris Johnson’s new Brexit deal. Market participants will initially welcome an end to the deadlock in parliament supporting a stronger Pound and Euro against the U.S. Dollar and Yen," says Halpenny.

However, Boele says while a Conservative majority might provide near-term support for Sterling, the currency would likely be weighed later in 2020 by the risk that the government does not extend the Brexit transition period beyond end-2020.

However it could also be argued that a majority for the Government makes it less likely that Parliament will stand in the way of the ratification of any EU-UK trade deal that is agreed in 2020, suggesting that another Brexit 'no deal' cliff edge emerging in 2020 is unlikely.