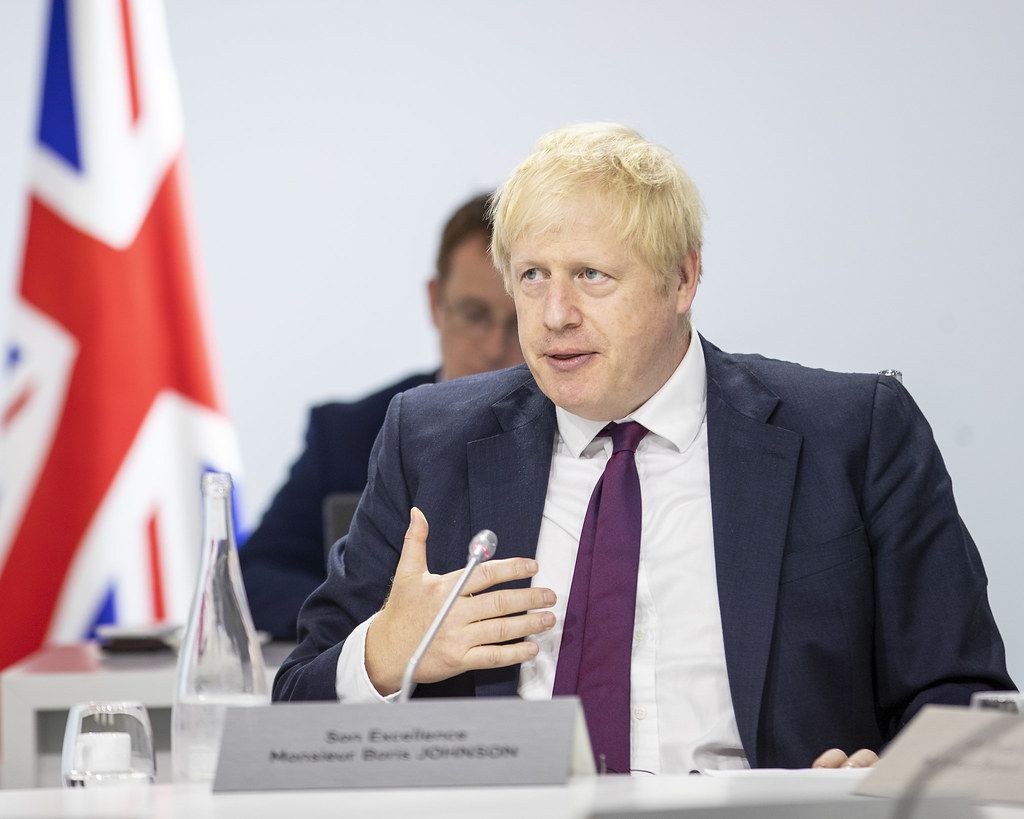 - Boris Johnson reiterates 'no deal' Brexit threat in The Telegraph.

The Pound corrected lower in a risk-off market Monday as traders responded to a cocktail of negative domestic and international headlines at the beginning of what promises to be an action-packed week for the British unit, as the Brexit saga rolls on and central banks on both sides of the Atlantic say their bit.

Sterling was lower against all major rivals Monday as investors ditched 'risk' assets and fled to safety following a drone attack on a Saudi Aramco oilfield that's sidelined nearly 6% of global supply and stoked fears of a conflict in the Gulf, as well as concerns for the global economy. Meanwhile, Chinese industrial production growth was revealed to have slipped to its lowest level since 2002 in August while retail sales surprised on the downside. Both helped boost the U.S. Dollar and other safe-haven assets while hitting everything associated with commodities and all things otherwise sensitive to changes in risk appetites.

"The week kicks off to a rocky start, reflecting the impact of the strike on Saudi oil facilities. Oil surged 15% on the heels of the attack, given the knee-jerk supply shock. The move has broadly benefited the USD, revealing the possible negative growth implications as the global economy continues to wobble," says Mark McCormick, head of FX strategy at TD Securities.

Domestic factors also helped send the Pound to the bottom of the bucket Monday as traders responded to Prime Minister Boris Johnson's Sunday article in The Telegraph. He's so-far stuck with his "do or die" pledge to leave the EU by October 31 regardless of if a deal has been reached, without saying how he would circumvent legislation that requires him to delay Brexit a third time if an agreement has not been approved in parliament by October 19

"It has at least given the impression to our partners that the UK is no longer either fully able or determined to leave on Oct 31," Johnson writes. "In so far as that impression has been given, it is wrong. We will leave by that date – deal or no deal. Yes, it may now be harder to get a deal, since MPs seem set on tying the Government’s hand behind its back. But we are working flat out to get one."

Johnson also dismissed the 'Operation Yellowhammer' dossier of government estimates about various risks stemming from a 'no deal' Brexit as reflecting a "very worst case scenario" that has now been greatly mitigated, and claimed he "passionately believes" he can secure the UK's amicable exit from the EU. The Prime Minister reiterated his 'no deal' threat during a working lunch with European Commission chief Jean-Claude Juncker in Luxembourg Monday.

"The Prime Minister reconfirmed his commitment to the Good Friday/Belfast Agreement and his determination to reach a deal with the backstop removed, that UK parliamentarians could support. The Prime Minister also reiterated that he would not request an extension and would take the UK out of the EU on the 31st October," says a Downing Street spokesperson. "The leaders agreed that the discussions needed to intensify and that meetings would soon take place on a daily basis. It was agreed that talks should also take place at a political level." 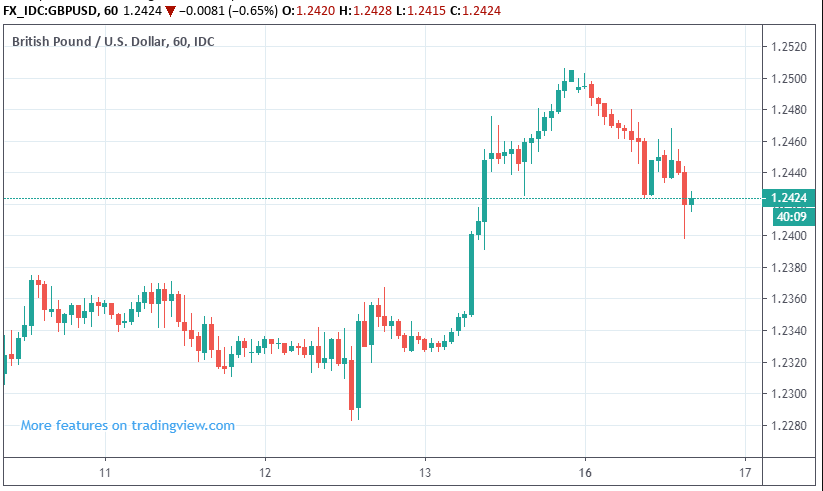 "The pound has now run into stronger technical resistance levels between 1.2500 to 1.2600 for cable where the July highs are located, and support at just below 0.8550 for EUR/GBP from the 200-day moving average. It should make further near-term gains more challenging for the pound after its recent sharp rebound. The pound continues to derive support from building optimism over the prospect of a last minute Brexit deal stemming from reports that the UK government is working on a type of Northern Ireland-only backstop to ease concerns over a hard border," says Lee Hardman, an analyst at MUFG.

Monday's price action comes after Sterling ran head-on into technical resistance on the charts late last week in the wake of strong gains prompted by speculation the government could be preparing to soften its 'red lines' around the so-called Northern Irish backstop in the EU withdrawal agreement. However, analysts say that beyond the very short-term, it'll be the perceived risk of a 'no deal' Brexit that remains the most prominent driver of Pound Sterling.

The government was last week reported to be considering allowing Northern Ireland to become subject to EU rules for 'agri-food' after Brexit, which would require a stronger de facto border down the Irish Sea than exists currently for reasons of 'biosecurity' and to satisfy international rules. The Times also says Northern Ireland might remain subject to EU rules in relation to the goods trade, which casts Johnson's purported plan in a similar light to the so-called 'Chequers' proposal of Theresa May.

Jean-Claude Juncker, the outgoing European Commission chief, said Monday the EU has not yet received any proposals from Johnson or the UK government.

Johnson's Sunday statements were followed by suggestions from Brexit Secretary Steven Barclay that the 'implementation period' in the withdrawal agreement, which ensures the UK continues to tow the EU line for years after the official exit date as the future relationship is negotiated, could be extended up until the end of 2022. It remains far from clear whether Boris Johnson will be able to secure a majority in favour of any agreement he negotiates.

"PM Johnson will meet face-to-face with Juncker today as expectations that a deal may be reached and rushed through parliament before Oct 31 have risen sharply," says Daria Parkhomenko, a strategist at RBC Capital Markets. " The meeting is in Luxembourg over lunch, so expect headlines early afternoon local time and GBP to continue strengthening if they are constructive. Additionally, the Supreme Court will rule whether the prorogation of parliament was legal at some point this week. A ruling against the government would be humiliating, but with parliament having rushed through the Brexit delay legislation before it was prorogued, the practical consequences would be limited." 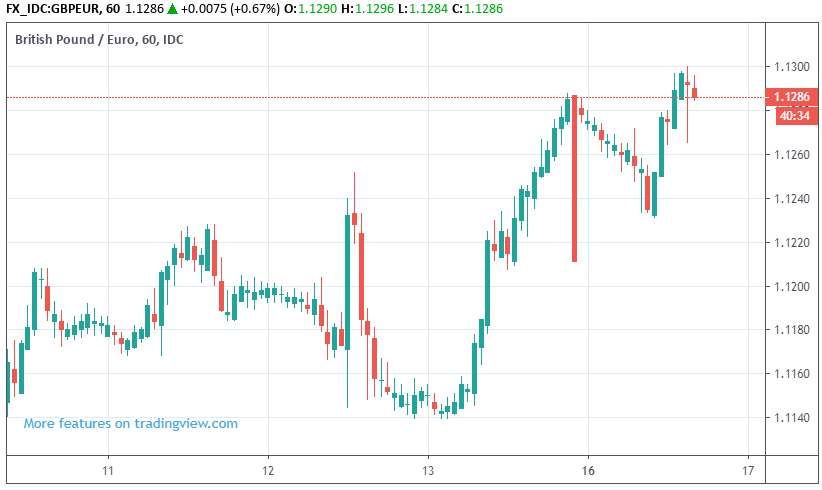 "The White House reaction to the oil strikes will set the tone for the next two days while we wait for Wednesday's FOMC meeting. Forecasters are unanimous in expecting a 25bp rate cut this week and the majority expect another this year. They nearly all agree the market is pricing in more easing than the economy needs, but don't know how the Fed can escape the market's clutches. That's just another reason to stick with the yen as a core long," says Kit Juckes, chief FX strategist at Societe Generale.

Monday's price action comes at the beginning of a big week for central banks and the global interest rate outlook, with investors likely to keep at least one eye on the Federal Reserve (Fed) at all times in the days ahead. The Bank of England (BoE) will also announce its latest interest rate decision and investors will be looking to see if it retains the 'tightening bias' that's seen it insist repeatedly that borrowing costs will need to rise in the UK over the coming years in order to keep inflation in check.

The global economy has slowed this year amid repeated escalations of the U.S.-China trade war, leading investors to anticipate the Fed will cut its interest rate repeatedly before the year is out. Markets have also become less convinced by the BoE's claims about its intentions on rates and are now betting it'll cut UK borrowing costs over the coming quarters, rather than raise them.

"Whilst the OIS market is –on balance– still looking for a rate cut in early-2020, the implied probabilities closely track those of a no-deal Brexi," says Jane Foley, head of FX strategy at Rabobank. "While we stick to our forecast for no changes in Bank rate in 2019 and 2020 on the premise that the UK will eventually leave the European Union with a deal in place, the risk of a no-deal Brexit remains a sword of Damocles hanging over the UK economy."