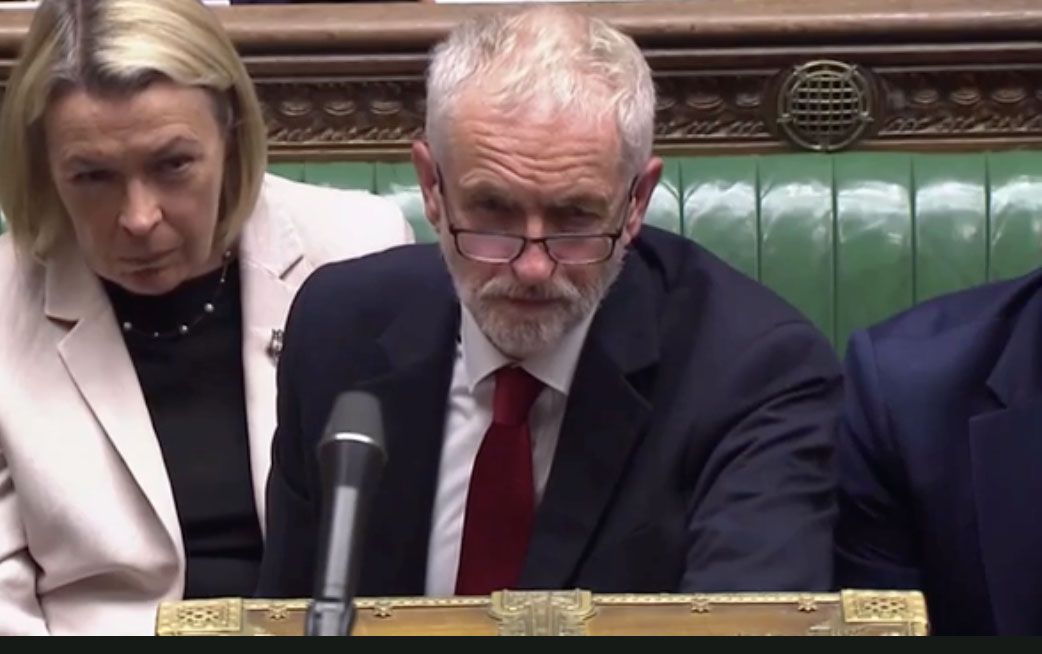 Above: Labour leader Jeremy Corbyn on the night he successfully lead attempts to take control of the parliamentary agenda. Still courtesy of Parliament.tv

- Labour won't back a snap General Election, yet

- Analysts starting to weigh up potential outcome of an election

The British Pound outperformed a host of major peers in the mid-week session as foreign exchange markets pared back negative bets against the currency on the view that the Brexit pendulum is swinging away from a 'no deal' Brexit in the short-term, however analysts maintain a wary stance on the currency in the UK's febrile political atmosphere.

The government suffered another defeated, by 329 - 300, as the Bill designed to prevent a 'no deal' Brexit progressed to its second stage.

The Bill now goes to the Committee stage and looks almost unstoppable in its progress, once passed it will in effect force Prime Minister Boris Johnson to seek an extension to the Brexit deadline.

Given Sterling tends to take its cues from the odds of a 'no deal' Brexit increasing or decreasing, it might come as little surprise that the moves in parliament to outlaw a 'no deal' coincide with the broad-based recovery in the UK currency.

Economist Kallum Pickering at Berenberg Bank in London says the odds of a 'no deal' transpiring have been reduced by recent developments.

Berenberg currently put the risk of a 'hard' Brexit at 40% but say recent developments, and the outlook for UK politics tilt the risk to this call to the upside.

It appears that those MPs who stand against a 'no deal' hold the initiative, having ceased control of the business of the House of Commons on Tuesday night after defeating the government with a 27 vote margin.

By voting to take control of the House of Commons, MPs opened the door to Benn's legislation and appear to have convinced currency market participants that the prospect of a 'no deal' outcome have improved.

However, the price action in Sterling remains erratic in our view, and the volatility is symptomatic of a currency judged to be facing two-way risks:

On the one hand, 'no deal' Brexit odds remain elevated, on the other the chances of another Brexit delay have risen markedly which could provide time for a new deal to be struck or a new government to be installed.

But, the game is by no means up and we would expect Sterling to remain highly dependent on headlines.

"The anti-'no deal' coalition are clearly emboldened by their growing strength, with Johnson’s calls for a general election expected to be rebuffed until anti 'no deal' legislation is passed. Ultimately, the circumstances leave plenty of room for a disorderly exit, with the prospect of a Corbyn-led period of extensions and uncertainty not the most exciting prospect," says Joshua Mahony, Senior Market Analyst at IG.

Mahony warns that while developments in parliament might have offered Sterling some reprieve short-term, it has hard to see any outcome other than a 'no deal' Brexit.

"There is no doubt that any General Election would be difficult to call, and thus while a lifeline has been provided for the Pound, Boris Johnson still remains the favourite, with a no-deal now seemingly the default outcome," says Mahony.

The Labour Party confirmed on Wednesday they are not yet ready to back a General Election, something Johnson is now gunning for after he lost control of both Brexit, and the House of Commons following events in parliament on Tuesday night.

MPs voted in favour of taking control of the business of the House of Commons that will allow them to today pass legislation that effectively outlaws a 'no deal' Brexit by forcing the Prime Minister to ask Brussels for a Brexit extension, and bestows upon the EU the right to determine the duration of any such extension.

“The consequences of this vote tonight means that parliament is on the brink of wrecking any deal that we might be able to get in Brussels,” Johnson told the Commons in the wake of the defeat. “It will hand control of the negotiations to the EU.” 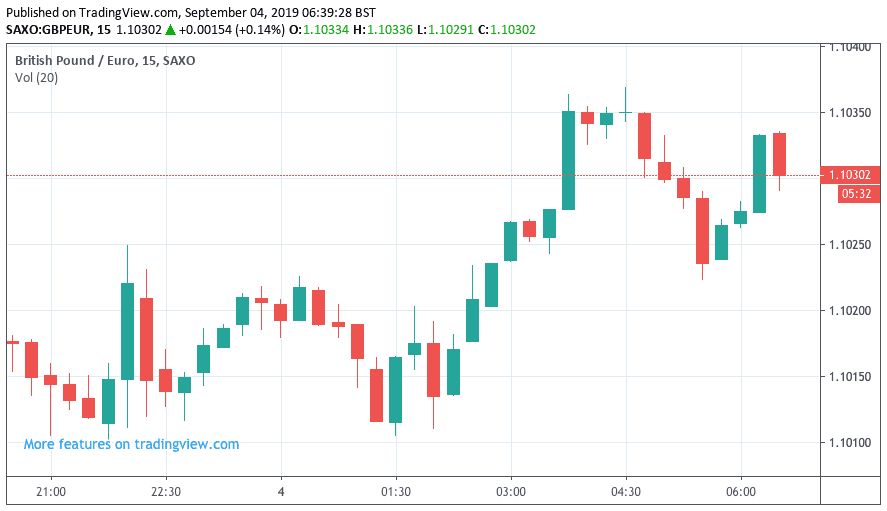 Above: Sterling-Euro price action has been undecisive over the past 24 hours.

We would expect any advances in Sterling to remain relatively short-lived, believing the currency to be effectively paralysed by the myriad outcomes that lie ahead.

Expect political developments to keep a vice-like grip on the currency over the next 24 hours. For the Pound, "the outlook remains uncertain," says Pickering. "Sterling and gilt yields have slid in recent weeks as UK political risks have increased. Depending on forthcoming political developments, we may see further drops yet."

Johnson has said under no circumstances will be ask for an extension to Brexit, and said he will be seeking from parliament the right to hold a General Election that will let the people decide who they want to attend the European Council meeting on October 17.

However, a General Election requires a two-thirds majority to pass through parliament, and Labour's Brexit spokesman Keir Starmer has confirmed today that Labour won't back an election today. In an email to supporters, Starmer says an election is on "as and when the anti-'no deal' legislation is on the statute book".

"Boris Johnson has undoubtedly suffered a significant defeat, while his controversial strategy was doomed to failure from the outset. The British Pound, however, continues to be entirely confused as this political saga is likely to provide further surprises over the coming days," says Marc-André Fongern, FX & Macro Strategist at MAF Global Forex.

“We will legislate against his disastrous 'no deal' plans. We’ll support a vote to call a General Election, so the people can decide our country’s future, once the bill to stop no-deal is law.

"If the prime minister has confidence in his Brexit policy - when he has one he can put forward - he should put it before the people in a public vote. He wants to table a motion for a General Election. Fine: get the bill through first, in order to take no-deal off the table."

A General Election presents further questions for currency traders who will balance up the negatives associated with an anti-business socialist government under Jeremy Corbyn, or a 'no deal' backing Conservative administration.

"With the Conservatives ahead in the polls, a no-deal Brexit would probably remain a strong possibility after an election. But a Labour government is also possible. That would rule out a no deal Brexit, but also bring with it lots of anti-business policies," says Andrew Wishart, UK Economist, at Capital Economics. 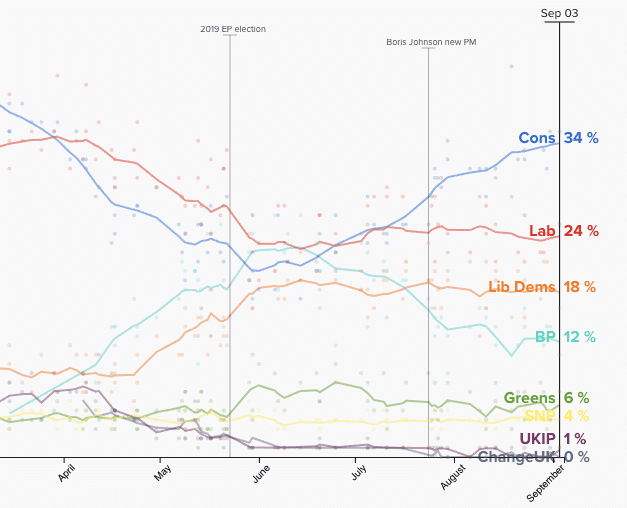 How an election plays out ultimately depends on how the Brexit Party and Conservative Party square up: there is a strong chance that were Nigel Farage to field candidates in all constituencies, then the leave vote would be split, thereby denying the Conservatives of a majority.

Of course, this could lead to a coalition or a confidence-and-supply agreement between the two sides.

For Sterling the outcome would not be ideal in that this administration would be heavily Euro-sceptic and ultimately lead to an uncompromising stance on the issue.

"If the Conservatives did win with a decent majority, they would try to secure a Brexit deal, but failing that would be content to leave the EU with no deal. The latter seems more likely than the former in which case we think the economy would slip into recession at the turn of the year, albeit a mild one," says Wishart.

If Labour were to win, Wishart sees a mixed bag for the economy:

"If the polls change or are wrong and the election results in a Labour government or a Labour-led coalition, 'no deal' would be taken off the table in favour of a softer Brexit, or even no Brexit at all following a second referendum. There are some scenarios where the economy would receive a net boost from this result as political uncertainty is reduced and some pent-up investment released. But the anti-business policies (such as high taxes and nationalisation) that Labour could introduce, if not constrained by a coalition partner, would probably result in the economy being weaker over a number of years."

Johnson has a Right to Suspend Parliament

A Scottish court has today ruled that Prime Minister Johnson's decision to suspend parliament from September 12 through to October 14 is lawful, with the presiding judge saying the matter was not one for judges to decide.

More than 70 opposition lawmakers had challenged Johnson's right to suspend parliament, arguing it was illegal and unconstitutional because his intent was to force through a 'no deal' Brexit on October 31 by limiting the opportunity for opponents to object.

Judge Raymond Doherty said the question was not a matter for judicial interference and was a political issue which should be judged by parliament and the electorate. He said it was up to parliament to decide when it sat.

"In my opinion, there has been no contravention of the rule of law. Parliament is the master of its own proceedings, rules and privileges," said Doherty. "This is political territory and decision-making which cannot be measured against legal standards and only by political judgments," he added.