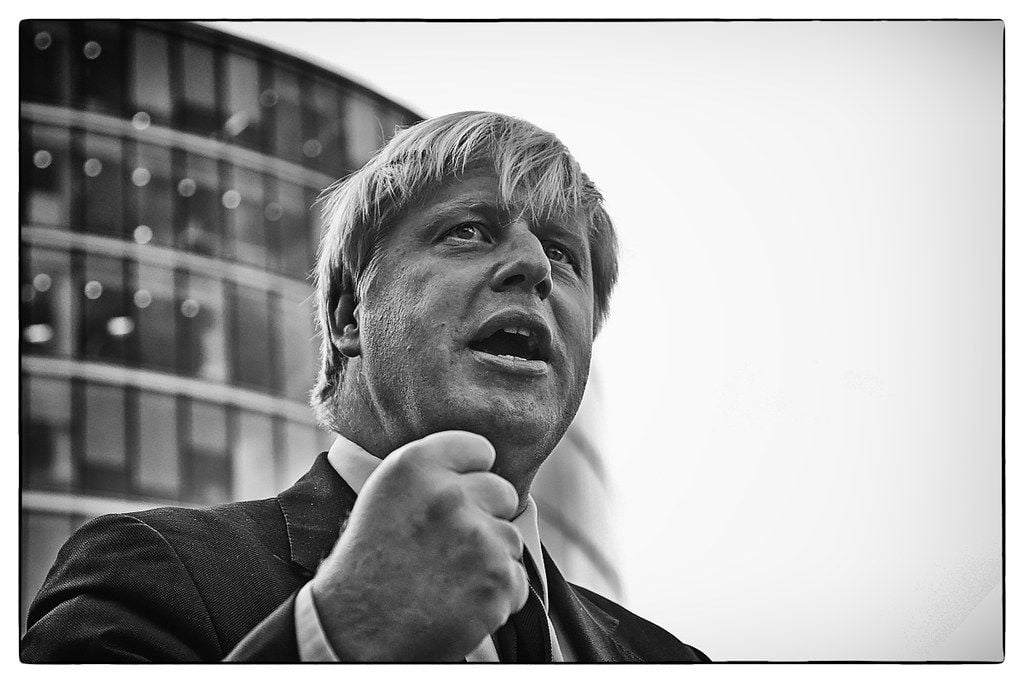 The British Pound is churning in familiar territory against the Euro, U.S. Dollar and other major currencies mid-week, with FX market attention focussed firmly on Brexit headlines.

On the near-term agenda is a meeting between German Chancellor Angela Merkel and Prime Minister Boris Johnson later in the day; we are told by one analyst that any positive headlines here could see Sterling garner further support.

Johnson's trip to Berlin comes as the UK and EU continue a steady march towards a 'no deal' Brexit: significant developments on the UK's preparedness for such an outcome were underlined over the past 24 hours after UK Brexit Secretary Steve Barclay said UK officials in Brussels will "only go to the meetings that really matter."

Commentators suggest this is a sign the Government is taking concrete steps towards a withdrawal from the EU.

This first stage in the process of the UK leaving the European Union will start 10 days from now, but UK diplomats will still attend meetings that affect the UK's key interests, including those in security, defence and finance.

“An incredible amount of time and effort goes into EU meetings with attendance just the tip of the iceberg. Our diligent, world-class officials also spend many hours preparing for them, whether in reading the necessary papers or working on briefings," Barclay told the Times, adding:

“From now on we will only go to the meetings that really matter, reducing attendance by over half and saving hundreds of hours. This will free up time for ministers and their officials to get on with preparing for our departure on October 31 and seizing the opportunities that lie ahead.”

The plan announced by Barclay comes as Prime Minister Boris Johnson pushes the EU for fresh negotiations on the Brexit deal, with a meeting with German Chancellor Angela Merkel lined up for tonight, and a meeting with French President Emmanuel Macron tomorrow.

Reports suggest Johnson will deliver to European capitals the message that parliament cannot prevent a 'no deal' Brexit.

"Johnson is meeting with German chancellor Angela Merkel to, among other things, discuss Brexit. In his letter Monday, Johnson made it clear that the backstop needs to be removed for the withdrawal deal to pass the House of Commons but the EU has repeatedly rejected this, as it sees it as a necessary insurance policy to avoid a hard border. The swift refusal yesterday led to a depreciation of GBP," says Jens Peter Sørensen, Chief Analyst at Danske Bank.

However, the Pound soon went higher after Merkel was quoted as saying the European Union would think about practical solutions to the backstop, an agreed insurance policy for the Irish border that London wants scrapped.

"The moment we have a practical arrangement on how to preserve the Good Friday Agreement and at the same time define the borders of the (European Union's) internal market, we would not need the backstop anymore. This means we would naturally think about practical solutions. And I've always said that when one has the will to find these solutions, one can do so in a short period of time. The EU is ready to find a solution." 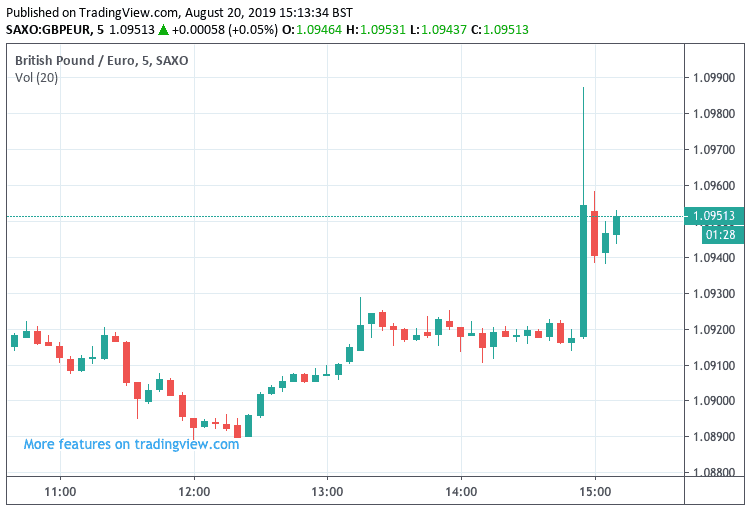 Above: Sterling jumps on the headlines relating to Angela Merkel's view on the Irish border

The currency market's reactions to Merkel's comments remind us that Sterling remains highly sensitive to political news flow and will remain headline driven for the foreseeable future and therefore readers with Sterling payment commitments must remain highly vigilant of further volatility.

"Today’s meeting, along with tomorrow’s meeting with France’s President Macron may provide a guide to whether there is potential for avoiding a 'no deal' Brexit, ahead of the G7 meetings this weekend. Positive news would see the GBP rally further to test important resistance levels," says Robin Wilkin, a cross-asset strategist with Lloyds Bank.

We suspect any gains would however be limited in nature as we remain of the view that Merkel and Macron will be guarded in their comments, seeking to neither open or shut doors on the UK until the domestic political landscape becomes clearer.

The incentive to improve ties with the UK ahead of developments in parliament do not make sense at this point, as there is the prospect of the Johnson regime is deposed in a no-confidence vote.

Any subsequent general election could ultimately put the UK on the road to another EU referendum were a pro-EU grouping involving Labour, Liberal Democrats and SNP command a majority in parliament.

Therefore, expect the big political fireworks and more sustained moves in Sterling to come in September when MPs return to Westminster and we would expect currency markets to maintain a wait-and-see approach to Sterling near-term.

"The EU and UK (are) on course for a 'no deal' Brexit at the end of October unless there is a last minute compromise or a change in UK government. As a result, we continue to believe that the risks for the Pound are skewed to the downside even as the market has moved along way in recent months to price in 'no deal' Brexit risk," says Lee Hardman, a currency analyst with MUFG in London.