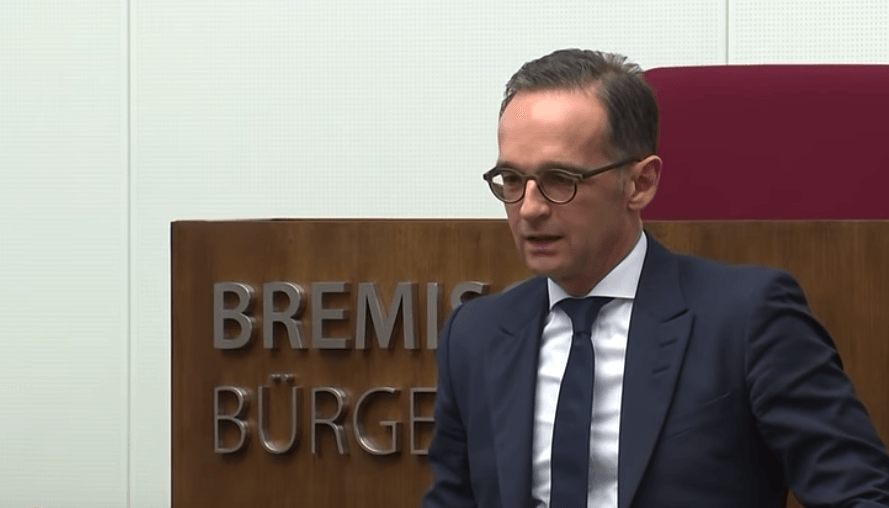 - Maas: Brexit cannot go on for a decade

The Pound briefly dipped in early Asian trade ahead of today’s March UK labour market data due out at 09:30 B.S.T.

According to one foreign exchange strategist we follow, the cause of the decline were comments from a senior German minister that there will be no extension of the Brexit deadline beyond October 31.

This suggests that, after two extensions already being granted, the UK will either have to ratify the Brexit deal before them or come up with a 'softer' Brexit if a 'no deal' Brexit is to be avoided in the Autumn.

“They will have to decide what they want by October,” Heiko Maas told the Financial Times in an interview. “You cannot drag out Brexit for a decade.”

"The German Foreign Minister comments there would be no further extension to Brexit beyond October added to GBP weakness," says Joseph Capurso, a foreign exchange strategist with CBA.

According to the Financial Times' Tobias Buck, the comments from the senior German politician signals Germany will be less compromising should the UK once again look to buy further time.

"Angela Merkel, German chancellor, fought hard to secure a six-month Brexit delay at last week’s European summit against French insistence that the UK should be given at most until the end of June to secure an orderly withdrawal from the EU. Mr Maas’s intervention suggests that Berlin will side with the harder French line should the new Brexit deadline of October 31 draw closer without progress on the UK side," says Buck.

Brexit was expected to take a back seat as the prime driver for Sterling over coming days as UK parliamentarians are on their Easter holidays. However, the intervention by Maas should serve to remind readers that this headline-driven currency remains exposed to bouts of volatility on any unexpected interventions.

According to the ONS, UK average earnings, with bonuses included, read at 3.5%, as expected and indicate UK workers continue to see their pay-packets outstrip inflation. Earnings of employees are still however lower than before the 2008-2009 recession, after taking inflation into account.

"Another decent UK wage number driven partly by skill-shortages in certain sectors - construction, hospitality and IT in particular according to recent data," says James Smith, an economist with ING Bank in London.

Employment grew 179K on a rolling three-month-on-three-month basis, ahead of expectations for growth of 173K.

The unemployment rate remains steady at 3.9% and the numbers in work now sit at another record high.

Perhaps a small 'fly in the ointment' was the claimant count, which showed the numbers seeking unemployment benefits rose 28.3K, against the 20K rise expected by markets.

The most important number to watch from a currency perspective was always going to be the wage growth data, as it is wages that policy makers at the Bank of England are interested in.

In short, better-than expected jobs numbers are good for the Pound.

"While recent UK economic data have been mixed the indications for the labour market continue to point to a risk of rising inflation pressures," says Rhys Herbert, an economist with Lloyds Bank.

Mike Jakeman, senior economist at PwC says there appears to be a divergence between the performance of the economy, which has softened over the past year, and the labour market, which continues to tighten - "to the benefit of workers".

"This initially appears odd, but may be explained by the fact that in a period of acute uncertainty over Brexit, firms chose to invest in people - who remain relatively cheap - rather than make long-term bets on expensive capital, such as new premises, machinery or software," says Jakeman. 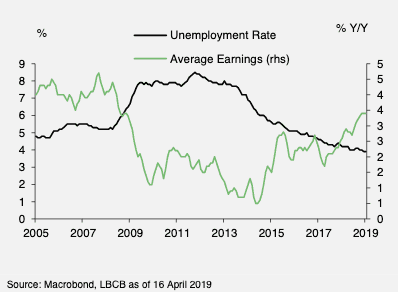 From a currency perspective, the reaction by Sterling has been a lacklustre one as we question just how much attention traders are willing to dedicate to economic data when Brexit ultimately remains the main game in town.

Deviation from expectation is always key: any big surprises in the data would have moved Sterling but ultimately expectations were more-or-less met. The problem is that in these times of Brexit the deviation required must be larger than in normal times.

"The UK labour market remains very tight which should be reflected in a further pick-up in wage growth," says Elsa Lignos, a foreign exchange strategist with RBC Capital Markets. "The problem is that it cannot translate into expectations of BoE hikes while Brexit uncertainty persists, and so it is hard to make it a positive GBP story," says Lignos.

"Sterling’s apathetic response to this morning’s figures reflects the shortened working week as well as the fact that Brexit continues to dictate the terms for the pound. This morning’s data release does, however, remind investors that there are parts of the UK economy that remain fundamentally sound,” says Hamish Muress, currency analyst at OFX.

Concerning the outlook for the UK labour market, we are hearing that it might be a matter of time before the long-run of good news starts to give way.

"We suspect that this could mark the peak of employment growth as the Brexit uncertainty reached its crescendo (for now!) and the surveys turned down sharply in March," says
Thomas Pugh, UK Economist with Capital Economics.