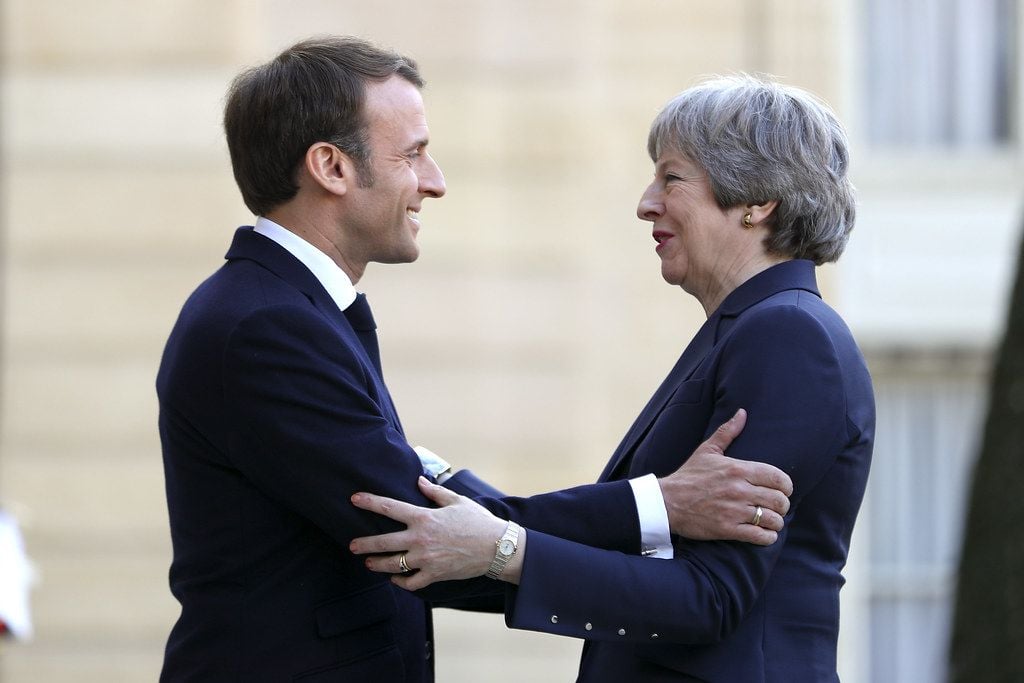 Above: France's Emmanuel Macron and the UK's Theresa May meet ahead of talks in Paris on Tuesday, April 09, Image (C) Gov.UK

- Pound trades with soft bias ahead of EU summit

There will be no Brexit on Friday, instead today EU leaders will let the UK know how long they intend to extend the exit process for in order to allow UK lawmakers to find a route to ratifying the deal.

The length of the deal that is finally offered could well impact trade in the British Pound.

The European Council meeting is due to commence at 17:00 B.S.T. and judging by previous events, could run into the early hours of Thursday morning.

A nine-month extension to December 31 is reportedly the popular expectation amongst currency market participants, while a full one-year extension is also highly possible as we know this is the offer favoured by European Council President Donald Tusk. Both will likely come with a clause that allows the UK to exit at any time provided a deal is ratified by parliament.

We don't expect any major fireworks in Pound Sterling on the above scenarios playing out and would expect the Pound-to-Euro exchange rate to trade within the 1.1468-1.18 March-April range, albeit with a bias to the downside as traders consider the negative implications posed by months of impending political limbo. 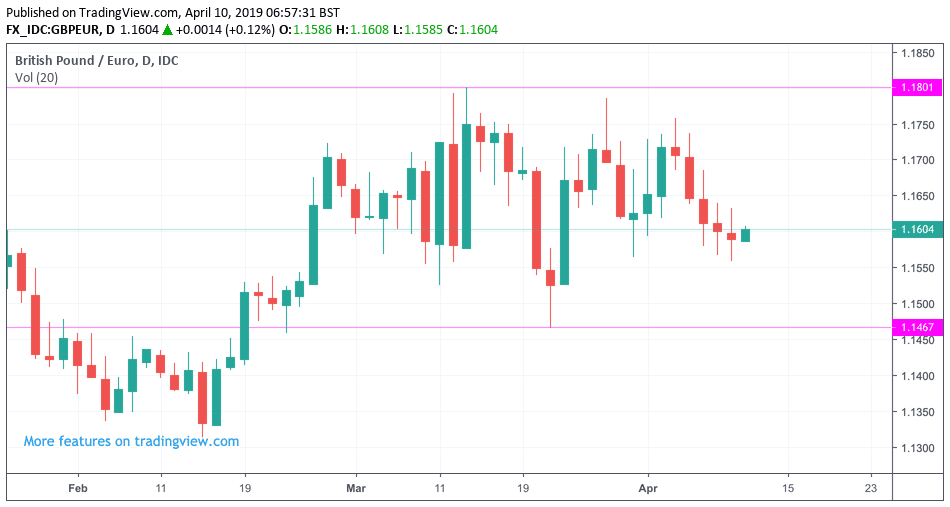 Above: GBP/EUR is right in the middle of a range, which will likely hold if the UK enters a long Brexit extension

If expectations of a nine-month to one-year extension is agreed we would forecast the Pound-to-Dollar exchange rate to trade the 1.2776-1.3380 range.

"GBP remains in the middle of its range for the last few days heading into tonight’s European Council meeting and expectations are converging on a long (9-12 months) extension," says Adam Cole, a foreign exchange strategist with RBC Capital Markets. 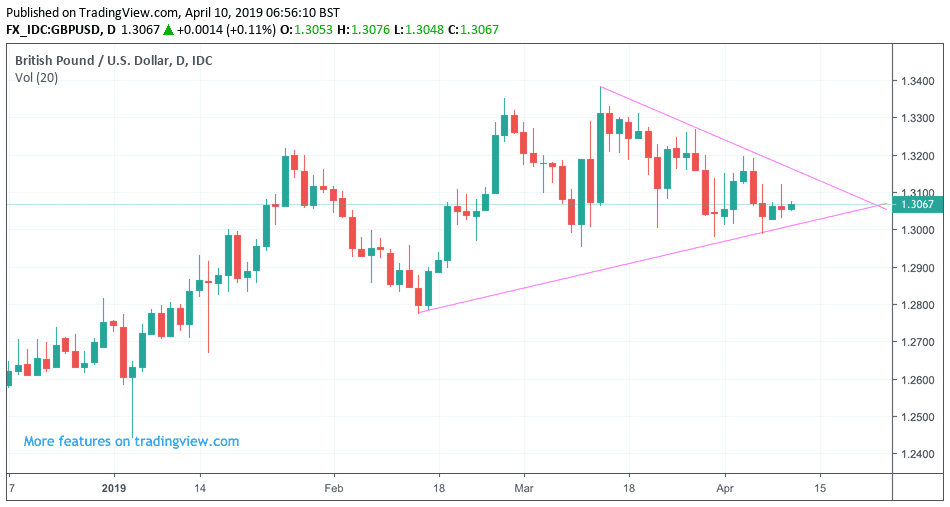 Above: The Pound's period of consolidation against the Dollar is looking increasingly constrictive.

There would however be potentially negative implications for the currency on any short-term delay as this would suggest the EU is ready to put pressure on UK politicians via a restricting the time available to reach a solution; a tactic that could ultimately force a decision.

While this is strategy is the optimal one to take from a game theory perspective, there is of course a risk that the strategy fails and a bitterly divided parliament remains unable to ratify a deal, thus sharply raising the prospect the UK leaves the EU without a deal at some point around mid-year.

"Any delay of Britain's departure from the European Union would seem likely to maintain the uncertainty and hurt the Pound, but a short extension could hurt more than a longer one," says Richard Pace, an analyst who sits on the Thomson Reuters currency desk.

"The EU might agree to May's shorter timeline, since France raised concerns that the UK could hijack EU elections and undermine the EU, especially if a eurosceptic PM were to replace May. It could be argued that a shorter delay provides less time to find an amicable solution and maintains a stronger possibility of a no-deal Brexit, albeit a few months down the road," adds Pace.

This is why the length of the delay is the key item on Pound Sterling's agenda today.

The push for a shorter time limit is known to be favoured by France who see the UK as representing a risk to further EU integration while the country's President Emmanuel Macron believes a firm stance on the matter will send the right message to any in the French electorate toying with voting for anti-EU parties in May's EU elections.

UK Prime Minister Theresa May met Macron in Paris late on Tuesday to try and soften his stance ahead of the Wednesday EU summit. It was not made immediately clear what May's talks with Macron achieved.

Ahead of May's visit Macron did set out strict conditions for any delay.

An aide to French President Emmanuel Macron told Reuters a delay that lasted a full year would be too long.

"In the scenario of an extended delay, one year would seem too long for us," said the aide, adding if Britain did delay its exit, it should not take part in EU budget talks or in choosing the next president of the EU executive and the other 27 member states should be able to review its "sincere cooperation".

EU leaders are said to be split on how accommodating towards the UK they should be, with Macron arguing the UK should be relegated to an “intermediate member state” and excluded from important decisions.

France is believed to enjoy the backing of Greece, Spain and Austria on the matter.

However, it is reported Tusk has warned EU states that Macron's favoured approach of an extension with “good behaviour” review clauses would create “constantly shifting” no-deal cliff edges and continued uncertainty for European businesses and citizens.

It is therefore really quite difficult to know the exact offer that will be made at this point.

"As far as I can see this morning, I am the only journalist who thinks the EU may not tonight - after all - force a Brexit delay of nine months to a year on Theresa May," says Robert Peston, ITV's Politics Editor. "If the whole of her strategy is cross-party talks, then EU leaders will legitimately query why anything more than a short number of months of delay is necessary."

When the Brexit delay to April 12 was agreed by the EU they warned any further delays would only be granted for a request based on a substantial change in circumstances or shift in strategy.

Peston says he does not believe the EU will grant a long Brexit delay, "unless the prime minister outlines a different strategy than trying to persuade the Labour party and/or significant numbers of Labour MPs to back the Withdrawal Agreement via modification of the Political Declaration."

May's request is likely centred on evidence that she is trying to find a cross-party consensus that would allow the Brexit deal to be ratified by parliament, and "if the whole of her strategy is cross-party talks, then EU leaders will legitimately query why anything more than a short number of months of delay is necessary," says Peston.

The Prime Minister's office has confirmed the latest cross-party talks between Labour and the Conservative have ended without agreement and the two parties have agreed to meet again on Thursday once the European Council has concluded.

Critically, talks have not collapsed which suggests the prospect of a solution to the Brexit impasse remains alive.

The reaching of an agreement between the two sides would be interpreted as a positive by foreign exchange markets we believe and remains one of the key upside risks to the currency in the near-term.

Reports out late on Tuesday confirm Labour has been meeting with Northern Ireland's DUP as part of efforts to find a cross-party solution.

The DUP confirmed they are open to any form of Brexit provided it maintains the integrity of the UK.  Labour argue for the formation of a customs union between the EU and UK as part of their preferred Brexit deal; something the Conservative Party stand against, as it restricts the UK's ability to strike trade deals with third. But for the DUP, a customs union is by no means a red line as it guarantees the integrity of the Northern Ireland-Great Britain union.

"Labour’s position on a customs union is likely to be welcomed by EU members. Firstly, it allows for a closer trade relationship, and secondly, of greater immediate significance, it would remove the need for a hard customs border either on the island of Ireland or between Northern Ireland and the rest of the UK," says Simon Murray, an Economist with Westpac.

This might come as a surprise to some as the DUP are often cast as 'hard' Brexiteers opposed to Theresa May's Brexit deal which they voted against as they believe the triggering of the Northern Ireland backstop clause in the deal would create a regulatory break between Northern Ireland and the UK.

Were the DUP to lend its support to any cross-party deal we feel the chances of the deal gaining a majority would be heightened.