Above: The City of London is the hub of the UK's services sector. Image © IRStone, Adobe Stock

The Pound experienced a knee-jerk move higher in response to some better-than-expected data on the UK economy's dominant services sector.

The IHS Markit Services PMI read at 51.3, well ahead of the 49.9 economists and the market had been expecting.

As is often the case when this data comes in above expectations, the British Pound rallied.

Despite the initial positive reaction we would caution readers that the move could be algorithmic with many trading systems simply prompting a buy or sell on any meaningful deviation away from an expected data point.

We would not be surprised to see Sterling settle back to levels seen ahead of the data release, particularly as the details contained in the PMI report are not quite as rosy as the headline number suggests.

Despite the services sector - which accounts for over 80% of the UK economy - growing, reports from survey respondents suggested that Brexit-related uncertainty remained by far the most prominent factor acting as a brake on business activity growth in February. 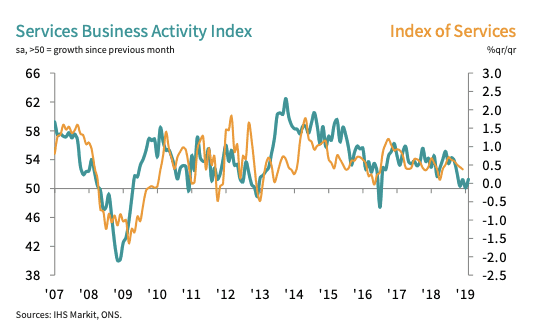 There are also some worry developments buried in the data.

According to IHS Markit, employment numbers declined at the fastest pace for over seven years as businesses opted to delay staff hiring in response to subdued demand and concerns about the near-term economic outlook.

The findings on employment echoed a similar report on employment losses reported in the Manufacturing PMI released on Friday, March 01.

"The UK PMI avoided slipping into contractionary territory in February, but the underlying details make it clear the economy is stalling as firms continue to batten down the hatches ahead of Brexit," says James Smith, Developed Markets Economist with ING Bank N.V. in London. "The bottom line is that growth will continue to stall over coming weeks, particularly as we may not get complete certainty on the possible Article 50 extension until a little over a week before the 29 March deadline."

If a Brexit deal is reached this month we would be interested to see if this drop in employment is a blip, or the start of a cyclical downturn in the labour market.

Optimism amongst UK businesses is downbeat, and we will also be looking for a boost should a deal be passed.

"UK business optimism regarding the next 12 months has sunk to the lowest ever recorded by the PMI surveys with the exceptions of the height of the global financial crisis and July 2016," says Chris Willamson, economist with IHS Markit.