- Morgan Stanley back GBP gains against the Euro

Pound Sterling starts the new week on a softer footing with markets considering a dour set of UK economic statistics and pondering the next moves that will emerge out of the Brexit saga.

The UK economy shrank in December 2018 according to official data from the ONS with month-on-month GDP data showing the economy shrank -0.4% in December, a decline that exceeds consensus expectations for a reading of 0%.

Quarter-on-quarter GDP data shows the economy grew 0.2% in the fourth quarter 2019, below the 0.3% growth forecast by analysts. The economy grew 1.3% year-on-year in the final quarter, below expectations for a reading of 1.4%. The economy is therefore not entering recessionary territory, but rolling three-month-on-three-month GDP meanwhile shows a clear picture of an economy witnessing falling rates of economic growth: 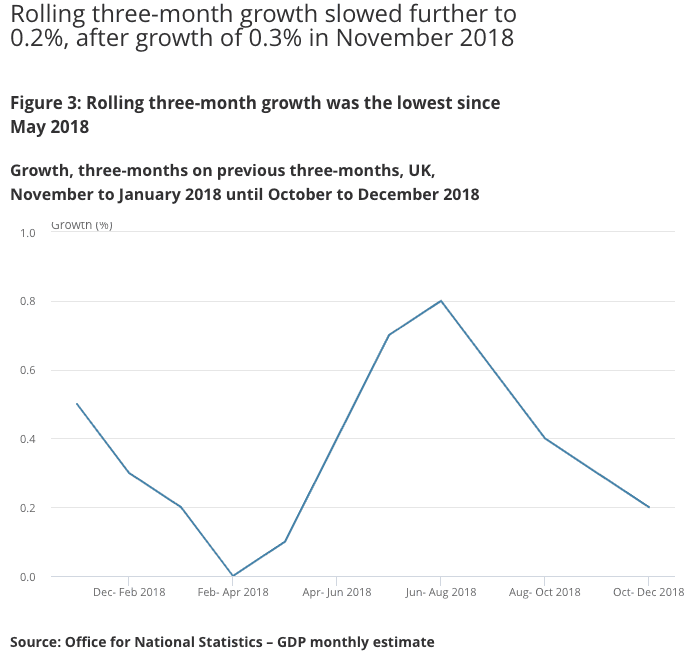 The data suggests the UK economy entered 2019 on a soft footing with the UK's manufacturing and industrial sectors proving to be an ongoing soft spot for the economy. 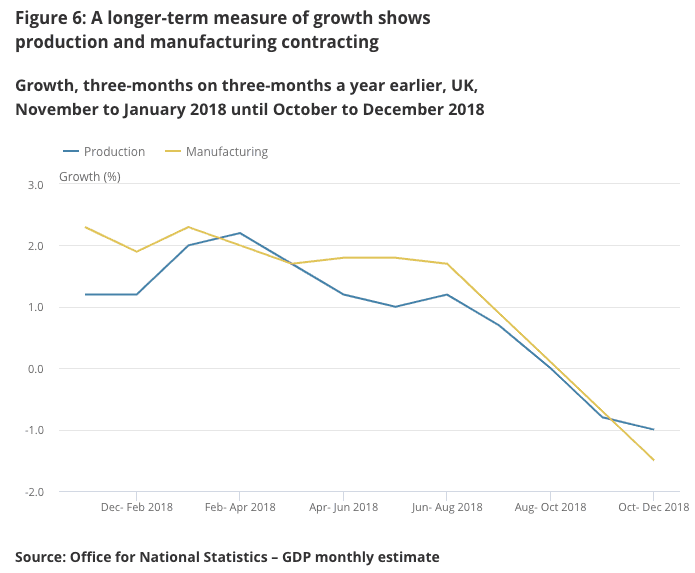 But it was not just the manufacturing and industrial sectors that dragged on the UK economy: the ONS reports their Index of Services reading for December showed contraction of 0.2% in the UK's largest economic sector, expectations were for the sector to expand 0.3%.

"December GDP data look awful, but the drop was driven by the construction and retail sectors, which are always volatile. Keep calm and carry on expecting slow growth, not a recession," says Samuel Tombs, UK Economist with Pantheon Macroeconomics.

The official ONS data comes days after the Bank of England downgraded 2019 GDP forecasts from 1.7% to 1.2%, on the basis of “softer activity abroad and the greater effects from Brexit uncertainties at home”.

The forecasts suggest to markets the Bank thinks interest rates may not need to rise as far as it thought a few months ago owing to the slowdown in UK ecnomic activity, which is on balance a negative for Sterling.

"With a growing risk that we may not know whether 'no deal' has been averted until much closer to the 29 March deadline, the UK economy faces a challenging few weeks. The chances of a rate hike from the Bank of England this year are receding," says James Smith, Developed Markets Economist with ING Bank N.V. in London. "The next few weeks are likely to see an increasing number of firms continuing to implement contingencies, which is unlikely to be growth-positive. While we still think 'no deal' will be avoided on March 29, most likely by Article 50 being extended, there is now a growing risk we won’t know for sure until the last minute."

In an interview with the BBC's Radio 4, Brexit figurehead Boris Johnson says today he’d accept a time limit and/or an exit mechanism to the backstop contained in the Withdrawal Agreement, and is therefore not seeking its full removal.

We believe this to be a significant development and one that supports the current Sterling-positive setup in the FX market.

The view aligns him with Prime Minister Theresa May's intentions when it comes to seeking further concessions from the European Union on the Brexit deal. The comments by Johnson align him closer to May and set him apart from the European Research Group which is the grouping of Brexiteers who have adopted a harder line on Brexit saying they will only vote for the deal if the backstop clause is removed completely.

We feel if May can deliver a plan that Johnson and Northern Ireland's DUP can get behind, the Brexit deal has a shot of passing through parliament prior to March 29, provided a number of Labour MPs from leave voting constituencies vote with the government.

With the Pound's outlook being a function of the binary 'deal' or 'no deal' Brexit, we believe these developments cement the market's view that a deal is ultimately more likely than no deal which is positive for Sterling.

Appetite for the Pound "to Deteriorate"

Arne Anders Lohmann Rasmussen the Chief Analyst with Danske Bank says he is looking for sentiment on Sterling to deteriorate over coming weeks, unless there is a material reduction in 'no deal' Brexit risks.

"We maintain the view that it will require further reduction in the ‘no deal’ Brexit risk for EUR/GBP to test and eventually break below 0.86. Appetite for GBP is likely to deteriorate as 26 February approaches without any signs of an agreement between the EU and UK," says Rasmussen in a recent currency strategy note to clients.

But, Morgan Stanley are Betting on the Pound

While Danske might have a more cautious view on Sterling, strategist Hans Redeker with Morgan Stanley remains more optimistic.

"We emphasise our bearish EUR/GBP call even though the BOE has lowered its GDP projection towards the lowest level since 2009," says Redeker in a recent note.

Catching Redeker's eye is a recent FT article claiming the GBP has been increasingly used for funding purposes, with foreign government and agency borrowers raising GBP9.3 BN in January representing the highest level for more than four years.

"Brexit related low funding costs have supported foreign borrowers raising funds in the GBP. These international funding flows may have contributed to GBP weakness. Should Brexit fears abate, GBP funding costs will rise working in favour of the GBP, which according to our calculations is 20% undervalued," says Redeker.

For the near-term, the analyst does expect all eyes to remain on the outcome of the ongoing Brexit negotiations with the Irish backstop remaining the stumbling block.