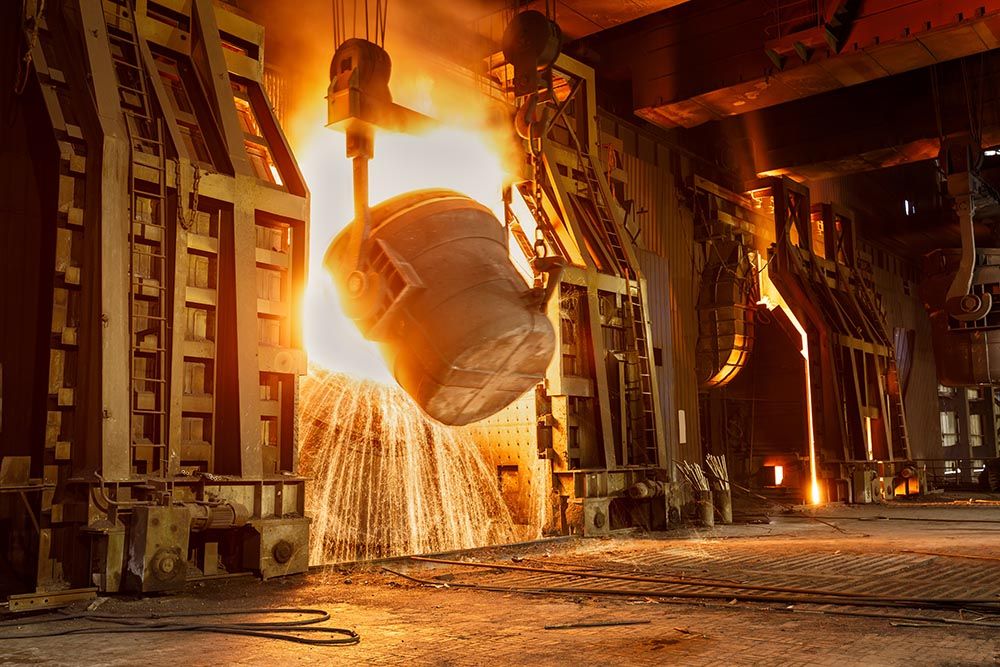 - Sterling subdued as indications point to a slower fourth quarter

Pound Sterling is seen paring its recent gains against the Euro and U.S. Dollar with markets digesting a significant dose of U.K. economic statistics which suggest the economy is slowing into year-end.

U.K. economic growth hit its highest level since the fourth quarter of 2016 according to the Office for National Statistics who report a 0.6% rise quarter-on-quarter for the third quarter of 2018.

However, markets are likely to take the view these impressive figures are backward-looking in nature while the positives were offset by some negative data releases elsewhere, hence why Sterling did not take a positive view on the figures.

The GDP data comes amidst a slew of numbers out from the ONS on Friday, November 09 that appears to be Sterling-neutral when taken in its entirety.

Let's look at the headlines:

Business Investment (QoQ) (Q3) read at -1.2%, markets had expected a reading of 0.2%. This is the fourth decline in excess of 1% since January 2015. Expect Brexit uncertainty to take the blame. GBP negative. 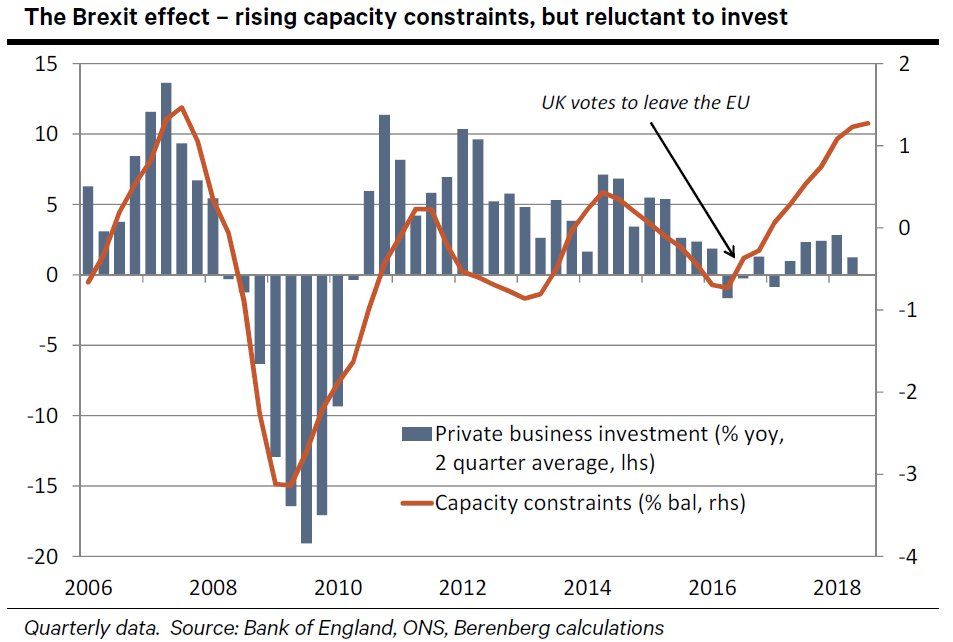 Above image courtesy of Berenberg Bank.

"The risk of a no-deal Brexit is the clear driver of the downturn," says Samuel Tombs at Pantheon Macroeconomics of the ongoing weakness in business investment. "By contrast, households’ spending rose by 0.5% and net trade made a big 0.8pp contribution to GDP growth."

GDP (QoQ) (Q3) read at 0.6% quarter-on-quarter for the third quarter in line with expectations and expectations of the Bank of England, ensuring the annualised rate sits at 1.5%. GBP neutral. 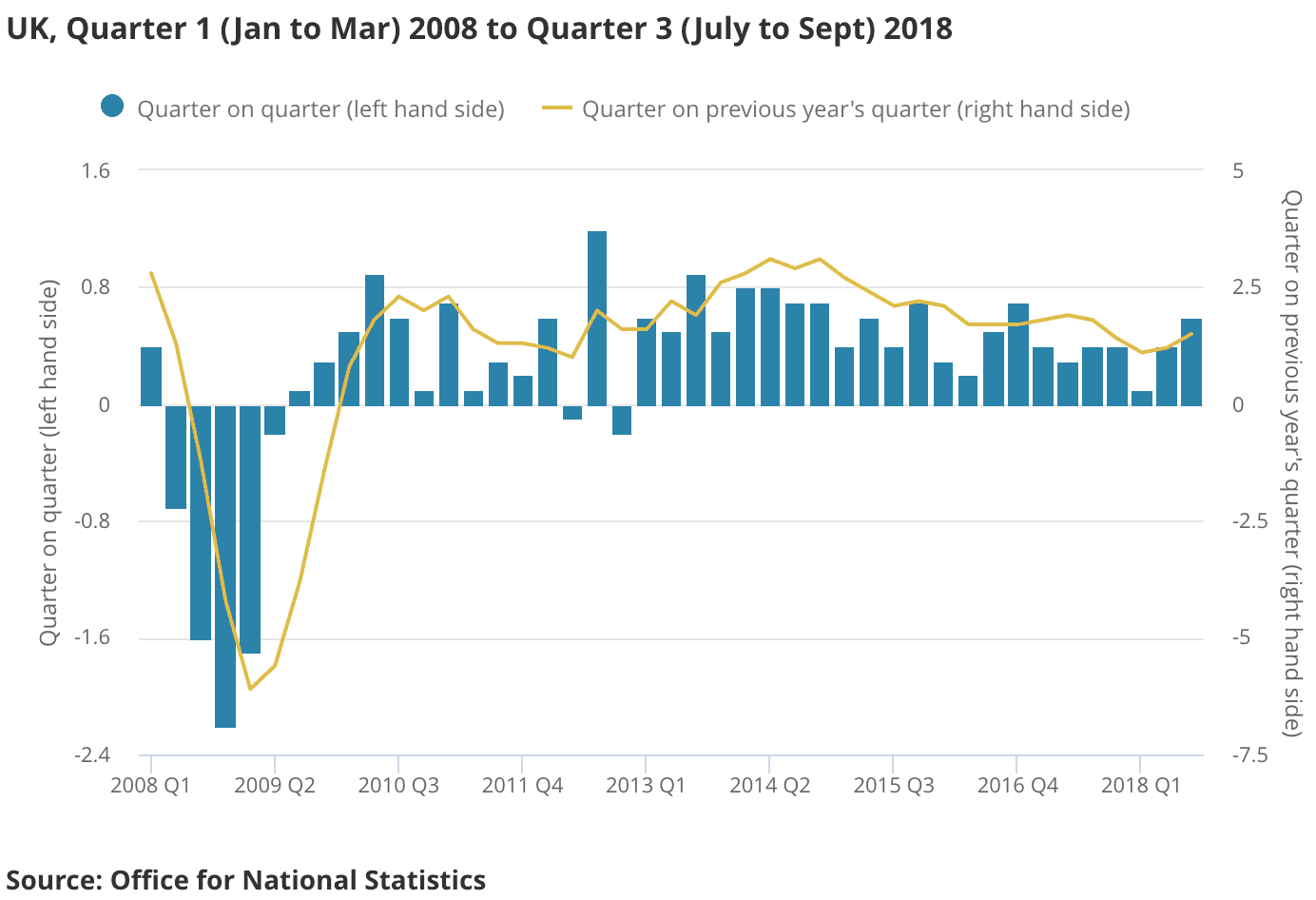 Monthly GDP (September) read at 0% consistent with the soft start to the final quarter. GBP negative.

"We expect GDP growth to slow to only around 0.2-0.3% in the final quarter of 2018, given that business surveys for October suggest many companies are putting off major investment decisions until the current uncertainty around Brexit is resolved. But we would expect consumer spending to hold up reasonably well in the run up to Christmas, given the recent pick-up in earnings growth and continued low unemployment rates," says John Hawksworth, chief economist at PwC.

Index of Services - which tells us how the U.K. economy's largest sector is performing showed growth of 0.4%, just below expectations for 0.5%. GBP negative.

The trade balance for September read at -£9.73BN, a much stronger reading then the -£11.40BN forecast by markets. This is an impressive result. GBP positive.

We can see the Pound has also decided that, taken in their entirety, the data are neutral.

the data the Pound-to-Euro exchange rate is quoted at 1.1481 as the pair retreats from a multi-month best at 1.1504 reached 24 hours previously.

The Pound-to-Dollar exchange rate is back below 1.31 at 1.3023 amidst a broad-based recovery in the U.S. Dollar witnessed over recent hours.

Economists have been responding to the official GDP data and giving their expectations for the final three months of 2018.

On balance it appears that a notable slowdown in activity is likely.

"The weighted-averaged PMI fell sharply in October, consumers' confidence has deteriorated again and many firms are warning that they are slashing investment at a faster rate. Accordingly, we still think the 30% probability that markets are attaching to a pre-Brexit increase in interest rates in Q1 is too high," says Tombs.

PwC expect GDP growth to slow to only around 0.2-0.3% quarter-on-quarter in the final quarter of 2018, given that business surveys for October suggest many companies are putting off major investment decisions until the current uncertainty around Brexit is resolved.

"But we would expect consumer spending to hold up reasonably well in the run up to Christmas, given the recent pick-up in earnings growth and continued low unemployment rates," says Hawksworth.

"Our main scenario, assuming a relatively smooth Brexit, is that growth could then pick up to around 1.6% year-on-year in 2019, helped by the boost to demand from the measures announced in the Budget. But risks are weighted to the downside, both due to Brexit and to factors weighing on international growth, including trade tensions, rising US interest rates and a possible slowdown in China," says the economist.

UniCredit expect growth to slow to 0.3% quarter-on-quarter in fourth quarter of 2018 with annualised growth set to end the year at 1.3%, with the risks skewed to the downside citing business surveys which have weakened notably at the start of fourth quarter.

"Firms will continue to delay their investment decisions until there is clarity on the Brexit transition, which we do not expect until 1Q19," says Daniel Vernazza, Chief U.K. and Senior Global Economist with UniCredit Bank in London.

However, not all forecasters are so gloomy.

Based on the latest GDP estimates, the Warwick Business School Forecasting System expects  growth to continue through 2019, predicting a nearly 50% chance that the economy will grow by more than 2%.

This compared to a one-in-ten chance of growth falling below 1%.

"While uncertainties remain, our forecast is that it is more likely than not that GDP growth in 2019 exceeds the central expectations of the Bank of England, the IMF and the HMT Panel of Independent Forecasters,” says Professor James Mitchell, of the Macroeconomic Policy and Forecasting Network at WBS.

The Warwick Business School Forecasting System is a University of Warwick based initiative to place impartial, academically robust macroeconomic forecasts in the public domain.

These forecasts pose bullish outcomes for Sterling; if the Warwick Business School Forecasting System is correct then we will certainly see the conditions ripe for at least two interest rate rises at the Bank of England which would deliver a notably stronger Pound than we are seeing today.