- Economy grows strongly through summer but stalls in August.

- GDP hits two-year high on quarterly basis but slows to 0% in August.

- Economy to slow for 2018 overall, but Brexit is still the driver of GBP.

The Pound erased earlier gains and slipped lower Tuesday after official data highlighted strong momentum in the economy during the summer months but revealed a slowdown in growth during August.

GDP growth came in at 0.7% for the three months to the end of August, unchanged from an upwardly-revised pace of expansion for the quarter to the end of July, and ahead of the consensus for a 0.6% expansion.

"The upward revision to growth in July leaves the economy on course for a 0.6% quarterly expansion in Q3, which would make it the strongest quarter since Q4 2016," says Andrew Wishart, an economist at Capital Economics. 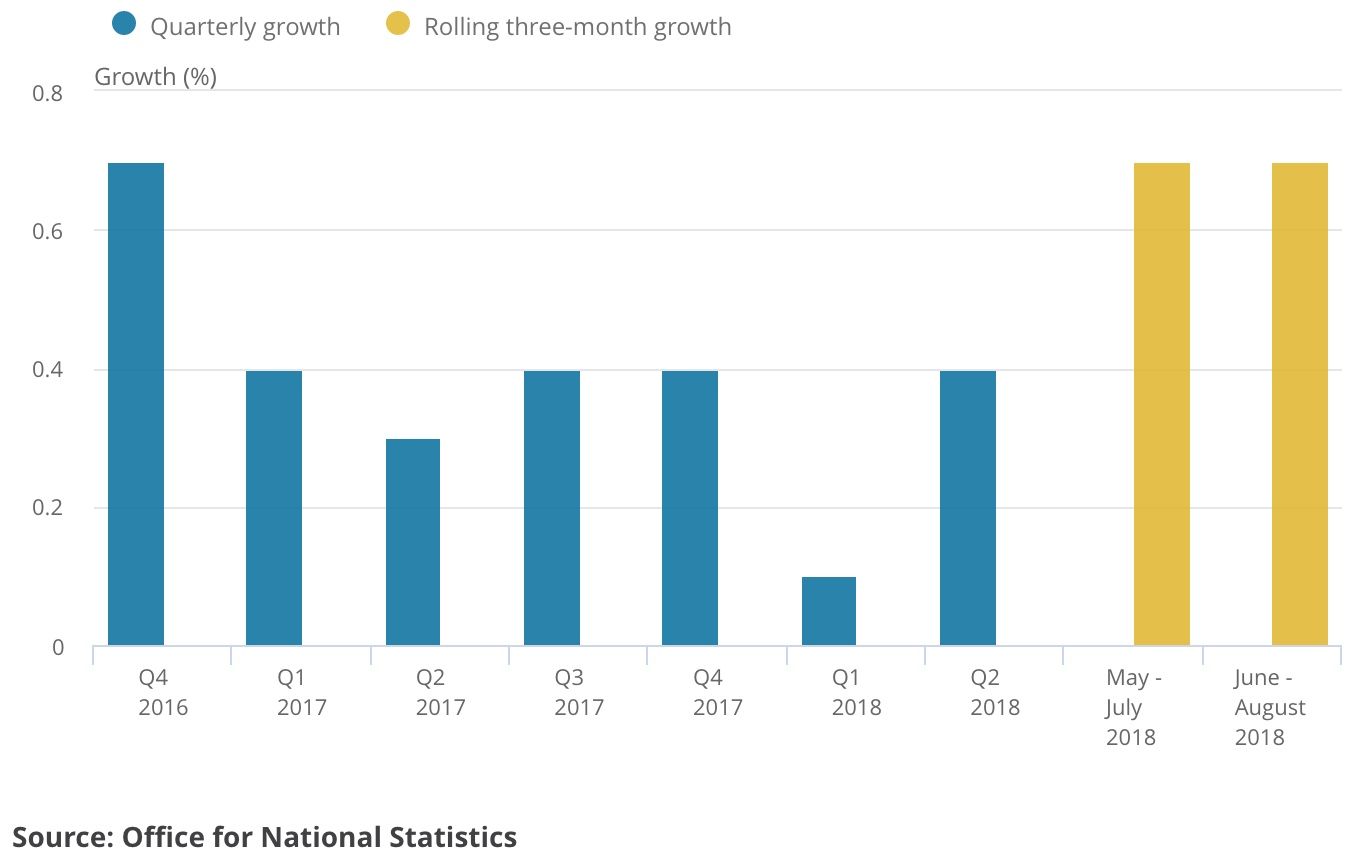 However, U.K. economic growth came in at 0% for the month of August, down from an upwardly-revised 0.4% back in July and beneath the consensus for a 0.1% expansion.

This suggests momentum ebbed from the economy toward the end of the third-quarter, taking some of the shine off of the three-month number.

"While the strength of GDP growth does reflect some underlying improvement, it has been flattered by a rebound in construction as the sector made up for time lost to poor weather at the start of the year. And even if the economy did record a 0.6% quarterly expansion in Q3 as we expect, it would still be on course for a weak performance in 2018 as a whole," Wishart warns.

The Office for National Statistics says all main sectors of the economy contributed to the recent growth numbers but that activity in the all-important services sector has been subdued relative to its historical trend.

Both wholesale and retail trades saw a pickup in activity, in part due to warmer weather that boosted sales of food, drinks and other weather-sensitive items throughout the summer months.

However, the star of the show was the previously-beleaguered construction industry, which saw output rise by 2.9% during the three months to the end of August. Although it contracted by -0.7% in the August month on its own.

"The deterioration in the GDP data following the spell of unusually hot weather in June and July confirms that the economy’s underlying momentum remains weak. Stagnation of output in the services sector in August was largely responsible for the below-consensus GDP print," says Sameul Tombs, chief U.K. economist at Pantheon Macroeconomics.

The Pound was quoted 0.11% lower at 1.3142 against the Dollar after pulling back from an earlier October high, although the Pound-to-Euro rate was still 0.04% higher at 1.1440 thanks to a weaker single currency.

Currency markets care about the GDP and production data because it reflects rising and falling demand within the UK economy, which has a direct bearing on consumer price inflation which is itself important for questions around interest rates. And interest rates themselves are a raison d'être for most moves in exchange rates.

"We doubt that the GDP data will support the case for another rate hike over the coming months; the 40% probability of another increase in Bank Rate by February priced-in by markets looks too high," says Pantheon's Tombs.

Separately, manufacturing production surprised on the downside in August while overall industrial production was stronger than economists had forecast.

Manufacturing output contracted by -0.2% during the recent month, deepening the -0.2% fall seen in July, when markets had looked for growth of 0.1%.

Industrial production, which incorporates output from the energy and mining sectors, rose 0.2% when markets had looked for just a 0.1% increase.

"Sunny weather has given UK growth a much-needed boost over the summer, but the combination of Brexit uncertainty and consumer caution suggests the economy faces a challenging autumn and winter," says James Smith, a developed markets economist at ING Group.

Wednesday's data comes as markets grow ever more hopeful that negotiators from both sides of the English Channel will soon agree terms of the U.K.s departure from the European Union.

Disagreement over how to manage the Northern Irish border in the event a trade deal is not agreed at a later date has been standing in the way of a deal after Brussels rejected Prime Minister Theresa May's "Chequers plan" at a summit in the Austrian city of Salzburg in September.

But Tuesday saw Brexit Secretary Dominic Raab hint to parliament that fresh concessions from PM May have moved the talks along. Markets are looking to see a deal announced ahead of the next European Council summit, which runs for two days from October 17.

If an agreement is not reached in time for the council to approve it this month then the odds of a so called no deal Brexit will have risen, because the eventual deal must be approved by the council and ratified in all parliaments across the EU before the U.K.'s March 29, 2019 exit date.

"Prime Minister Theresa May then wants to push the deal through Parliament in December," says Antje Praefcke, an analyst at Commerzbank. "The result of a vote in the UK Parliament is difficult to predict as allegedly several dozen Labour MPs would vote for a deal along the lines of May’s Chequers plan after all so as to avoid a no-deal exit, whereas a similar number of May’s colleagues would vote against it."