- Diverging core inflation and interest rates will weigh on EUR/USD

- Further down the line, however, rising hedging costs will see outflows from the US, and a fall in USD

The Dollar will stay stronger for a bit longer than previously expected, says Scandinavian lender Nordea Bank in a recent note, but after that it will weaken in line with the bank's existing forecasts.

Eurozone growth will stutter over the summer when high oil-price-fuelled inflation will start to diverge from stubbornly low core inflation; the lethal cocktail of rising inflation and subdued growth will delay the European Central Bank's (ECB) decision to turn off the 'emergency taps'.

As a consequence, the ECB will have to row back on its promise to kill quantitative easing (QE) in September and start raising rates at the start of 2019.

The effect will be to extend the Dollar king's reign, especially over the Euro, for a little while longer than had previously been expected.

The slowdown in growth in the EU, combined with Italexit fears is a recipe for a weaker Euro in the short-term, as both factors make the ECB even less likely to increase interest rates.

The tone of the ECB's May meeting minutes, released yesterday (Thursday), reinforced the perception that the central bank might be shifting its stance to favouring an extension of extraordinary conditions and a delay in raising interest rates.

"With slowing growth momentum in the Euro area and a weak core inflation pressure, we still judge that the ECB is relatively far from the exit door, leaving a prolongation of the QE programme into 2019 as a very likely scenario," says Larsen.

In the US core inflation is expected to rise more than in Europe or most other countries. And since core inflation tends to be the main influencer on the Fed's decision-making on interest rates, it will encourage the Fed to continue increasing rates at a rate of 4 hikes a year.

Higher interest rates will boost the Dollar - as they do most currencies - because they will attract greater inflows of foreign capital, drawn by the promise of higher returns. The opposite will be true of the Euro.

A comparison of US and Eurozone core inflation rates, advanced by 5-months, correlates quite closely with EUR/USD as shown on the chart below, and suggests downside risks to the exchange rate, if anything, which looks overvalued in the 1.17s of recent days. 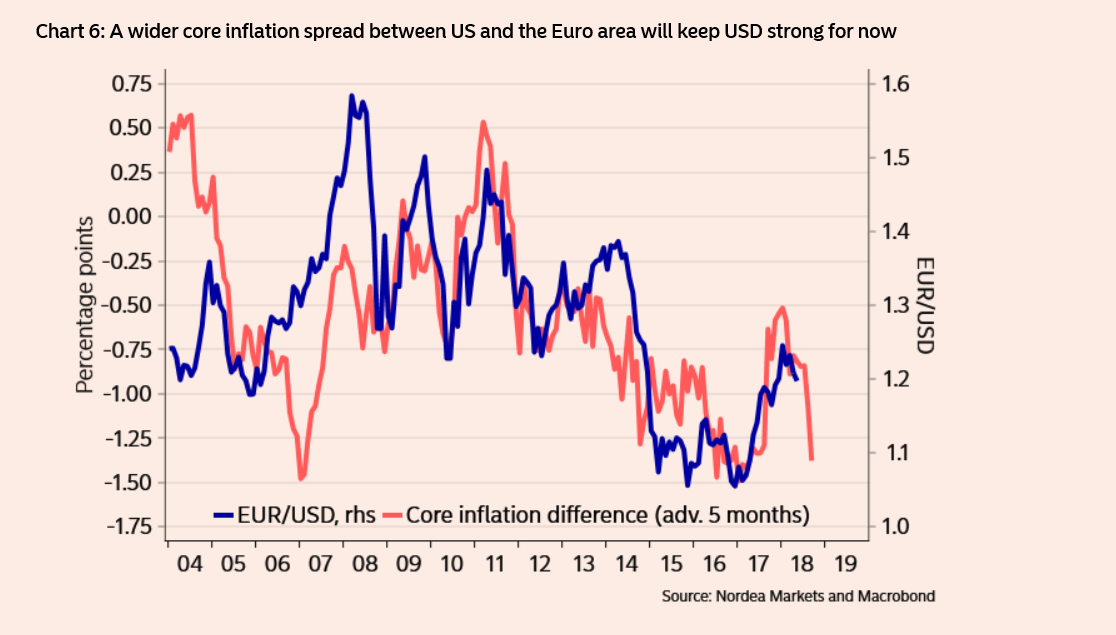 Yet Larsen sticks doggedly to his longer-term forecast that the pair will eventually rise back up and ascend to the 1.30 level over a 12-18 month period, as the Dollar falls.

The Dollar's final days will come about as US short-term interest rates rise more quickly than longer-term rates, thus flattening the yield curve. A flatter curve usually correlates with Dollar weakness and vice-versa for a steeper curve.

This disproportionate rise in short-term interest rates will come about as US rates rise steadily closer to their long-term cycle peak, also known as their 'terminal' or 'neutral' rate.

Higher short-term borrowing costs will increase the cost of hedging US bond portfolios, resulting in an exodus out of US bond markets, increased Dollar selling as a result, and a weaker Dollar, says Larsen.

"But long-term the case for a weaker USD remains intact, as the appeal of US assets could continue to weaken as a result of the US twin deficit and due to the elevated carry costs of hedging the FX exposure of US assets," says the strategist.

"The weakness in the USD throughout 2017 and early 2018 might have been driven by Fixed Income flows leaving the US, as a result of the higher hedging costs. While this may seem counterintuitive on the surface, higher short USD rates might actually be negative for the USD, as they erode the pick-up in internationals FX hedged US bond portfolios," he adds.

Interest rates as measured by the 10-year US Treasury Bond yield compared to the equivalent German bond yield, adjusted for short-term (3-month) hedging costs, is highly correlated to EUR/USD, and according to Nordea, the two are set to rise in the future (see chart below). 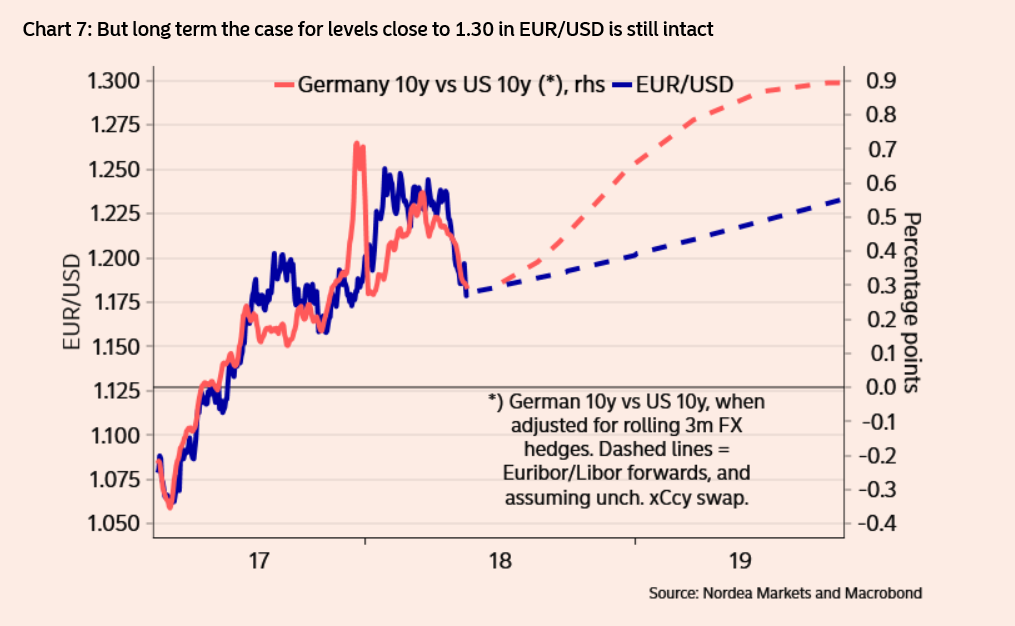