J.P. Morgan made a call on EUR/USD nine months ago, and they were correct. But, the extent of the Euro’s climb has caught analysts by surprise leading them to shift their year-end target for the exchange rate.

Analysts at the world’s largest investment bank have pushed higher their forecast profile for the Euro to Dollar exchange rate.

EUR/USD’s stellar performance thus far in 2017 is not over with a test of 1.20 still likely amdist an broad-based underperformance in the Dollar.

John Normand, Head of FX, Commodities & International Rates Research at J.P. Morgan Securities Plc in London concedes his team have underestimated how quickly the EUR/USD could rise above 1.15.

“Unless one makes a habit of being contrarian as an attention-seeking tactic, it is difficult to credibly propose non-consensus views very often. A bullish outlook on the Euro for 2017 was one of our occasional ones, though we underestimated how quickly the currency could rise above 1.15,” says Normand in an briefing seen by Pound Sterling Live.

That level had been J.P. Morgan’s end-2017 target since late 2016, confirming they were correct on the direction and the target looks to be reasonable.

Reasons for shifting up the EUR/USD Forecast

1) US inflation continues to surprise to the downside – “five consecutive months, which has only occurred once previously in the past 20 years – leading to one of the flattest US money market curves so far in this Fed cycle (see The biggest forecasting mistake of 2017 from August 1st).”

“If US inflation might be slow to normalise and US political risk increase, an overshooting Euro can extend further into year-end,” says Normand.

2) President Trump’s approval rating has fallen further due to a variety of policy missteps, “which in turn preserve the risk of a complicated debt ceiling debate once Congress returns from summer recess in September.” 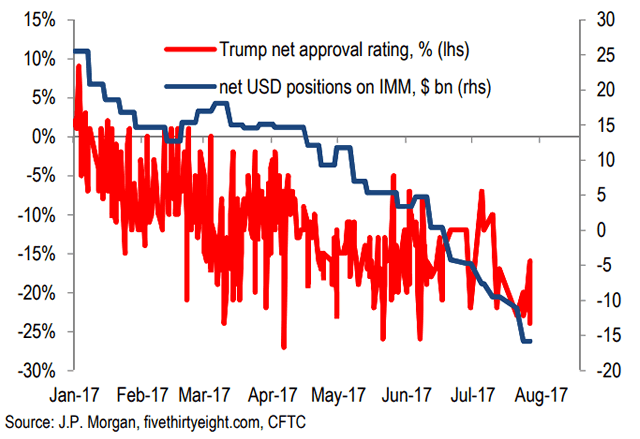 The ECB is meanwhile forecast to begin tapering of its asset purchase programme in December with J.P. Morgan Economics expecting asset purchases cut down to €40bn for three months, beginning in December. Consensus appears to be for a six-month extension due to the currency’s recent strength.

However, political risk should probably pivot to Europe in Q1 2018, however, given likely Italian elections at a time when long Euro positions will probably be record-large.

“That backdrop justifies consolidation in the currency, with a likely intra-quarter drop of perhaps five cents,” says Normand.

There are risks to the view including a couple months of upside surprises in US inflation following a recent damp patch.

Also note that the Euro is overvalued when compared to traditional drivers; this could act as a drag going forward. 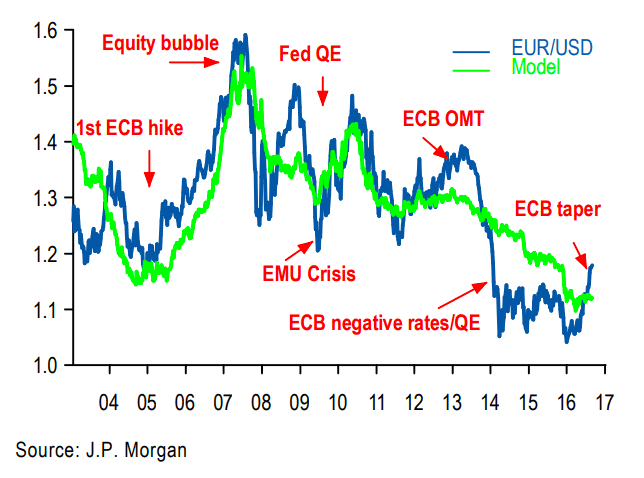 Above: Major policy events often cause the euro to over and undershoot more gradually evolving fundamentals; the current overvaluation is 5 to 10 cents, depending on sample period used for estimation Actual versus predicted level of EUR/USD from regressing spot rate on Euro-US 2-yr rate differentials and average 10-yr peripheral spreads to Germany. Weekly data since 2007 (10-yr sample).

Nevertheless, “risks are tough to quantify because some of them are unique. But each seems sufficiently reasonable that we struggle to forecast a base case that puts the euro above 1.20 on a sustained basis over the next three months, or above 1.25 over the next six months,” says Normand.