Economists at Swiss private bank J. Safra Sarasin have cut their forecasts for the Euro-to-Dollar exchange rate from 1.28, although a recovery back above 1.20 over coming weeks is still expected.

The decisionl comes amidst expectations that global inflation will remain elevated, moreso in the U.S. than in Europe.

As such the Federal Reserve (Fed) is tipped to hold onto its recent 'hawkish' tilt that bestowed support on the U.S. Dollar through the June and into July.

"Global economic growth has probably passed its peak and is no longer accelerating but we remain constructive about the macro outlook. Global inflationary pressures will probably build a bit further which means that the Fed’s hawkish tilt is unlikely to be reversed," says Dr. Karsten Junius, Chief Economist at J. Safra Sarasin.

"With the Fed’s policy stance remaining rather hawkish, we expect the US yield curve to flatten moderately. This should support the US dollar in the short term," he adds.

The Fed's stance forms a notable contrast with that of the European Central Bank (ECB) which this week announced it would tolerate inflation above 2.0%, a signal some in the market signals a lower-for-longer interest rate regime in Europe.

The divergence will therefore ultimately pose headwinds for the Euro-Dollar exchange rate, according to J. Safra Sarasin.

"The ECB, on the other hand, will probably stay very dovish throughout the rest of the year," says Junius.

However, J. Safra Sarasin say they are maintaining a view that the U.S. Dollar should weaken over the medium- to long-term, given (a) the slowdown in US macro momentum, relative to other regions, and (b) elevated US external funding needs in years ahead.

Indeed, despite the cut to the forecast the bank maintains a view that the Euro will recover back above 1.20 over coming weeks.

"The gap between EUR-USD and the according real-yield advantage has risen considerably, which implies that dollar gains should reverse at some point," says Junius. 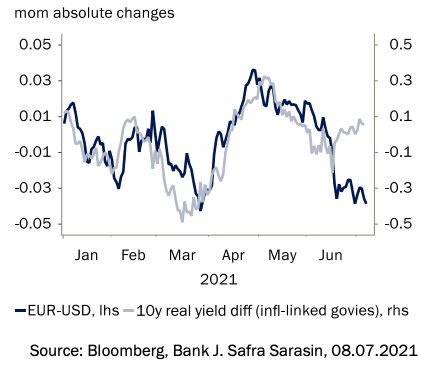 "We think that the cyclical factors should remain relevant. Given that the relative outperformance of euro area cyclical momentum should continue to carry on for a while, we expect the euro to be well supported," says Junius.