The Euro-to-Dollar exchange rate entered the new week appealing for dip buyers to salvage its earlier recovery after a U.S. Dollar power surge asked fresh questions of the short-term outlook for the single currency.

Europe’s single currency had the rug pulled out from under it along with many others late last week in messy trading that coincided with a short-lived surge in U.S. yields, month-end routines for stock market investors and the final day of trading ahead multiple public holidays in Japan as well as China.

The Euro-Dollar rate slumped more than one percent and back to the round number of 1.20, below which technical analysts say it should benefit from good support.

“The market stays immediately bid while above the 1.1990 11th March high. We look for gains to 1.2210/43, the 78.6% retracement of the move seen this year and the February high and then 1.2349 the 2021 high,” says Karen Jones, head of technical analysis for currencies, commodities and bonds at Commerzbank.

European and non-Dollar currencies more generally have been quick to find a corrective bid on several recent occasions in which the Dollar has surged in an apparent response to increases in U.S. yields, which appeared to have again succumbed to gravity ahead of the weekend close. 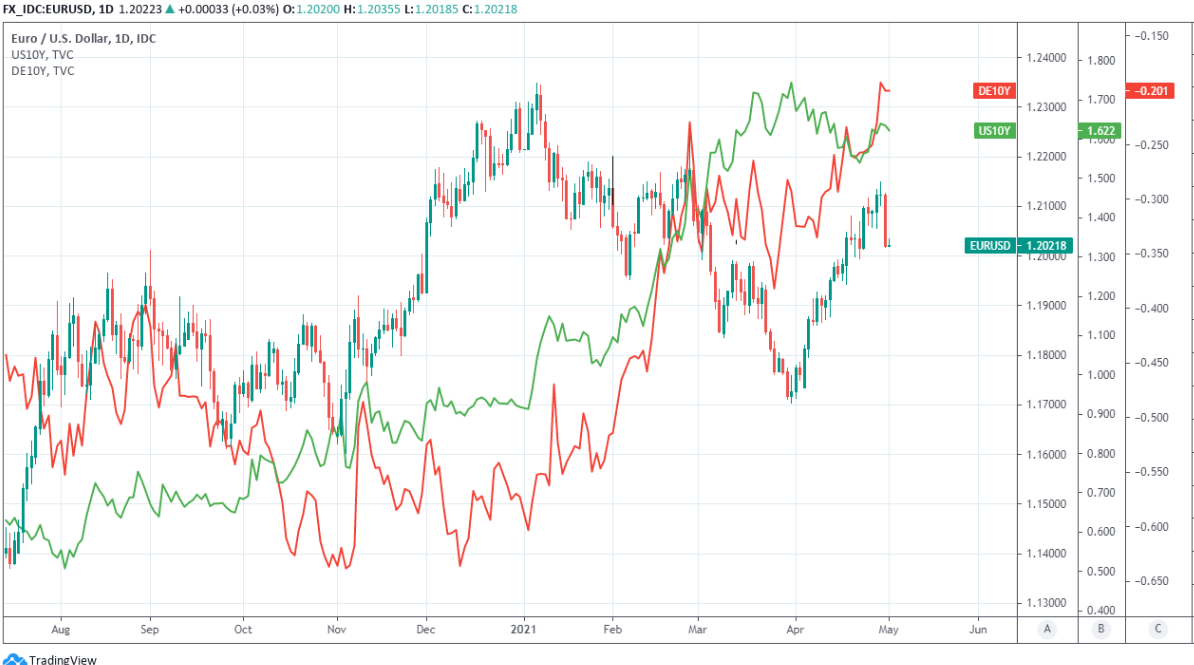 Above: Euro-Dollar at daily intervals with 10-year U.S. (green) and German (red) yields.

Kaplan will not be a voting member of the FOMC again until 2023, although other FOMC members who are voting members are scheduled to address various audiences this week which also sees the May non-farm payrolls report and range of other U.S. data released alongside minor figures from the Eurozone.

“The week should be full of strong US data releases including the April ISM and employment releases – the latter could see in excess of one million jobs added,” says Chris Turner, global head of markets and regional head of research at ING.

Strong U.S. economic numbers would risk fresh increases in yields that could yet upset the Euro-Dollar apple cart all over again.

“Despite the late-week pullback, we think recent fundamental news should support further EUR/USD gains over the next 1-2 months,” says Zach Pandl, co-head of global foreign exchange strategy at Goldman Sachs.

The main event for the Euro this week is an 11:00 Friday address from European Central Bank (ECB) President Christine Lagarde, who’s expected to speak about the global economic outlook at the EU’s state of the union event. 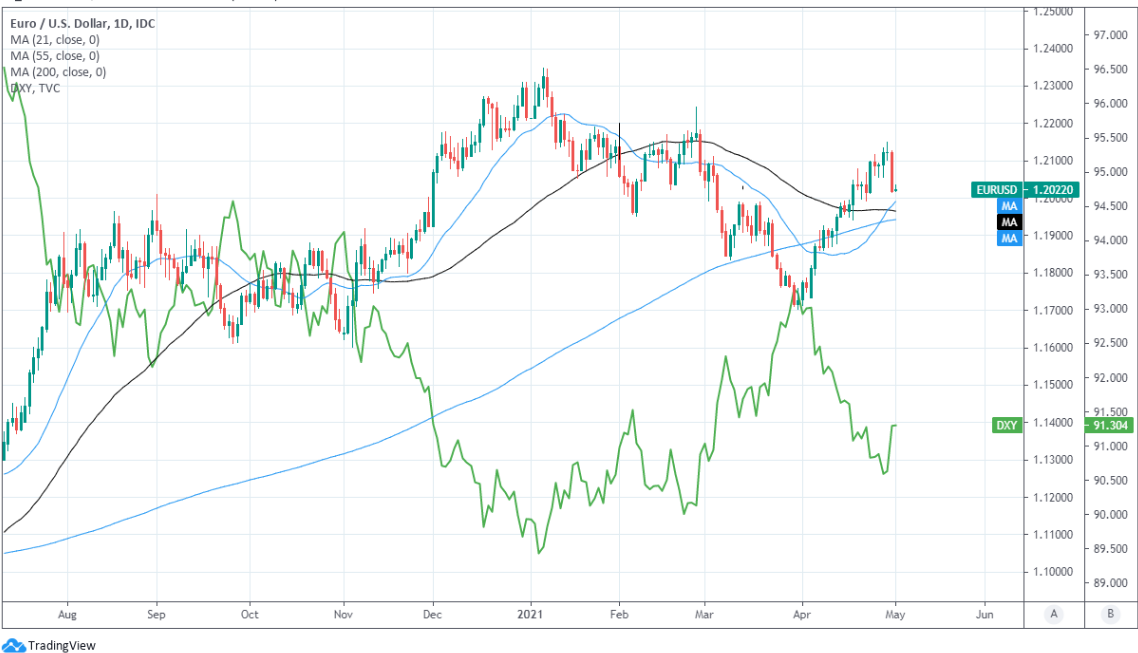 Above: Euro-Dollar at daily intervals with selected moving-averages and U.S. Dollar Index.

Lagarde and other ECB policymakers have recently noted an improved Eurozone outlook, due mainly to increasing coronavirus vaccinations and signs of greater economic resilience than was anticipated, so this week’s address may be an upside risk to the single currency

However and in the meantime much depends on investors’ enthusiasm for the Dollar at the beginning of a month which is typically a good one for the greenback.

“April is historically the worst month of the year for the dollar, while May is, again, the best month of the year – both when looking at hit ratios (% of positive months) and at the average monthly return,” says Martin Enlund, chief FX strategist at Nordea Markets.

With seasonal influences and the ECB aside the highlight of the week ahead Friday's U.S. jobs report will be of greater significance than otherwise given the Dollar's ongoing sensitivity to changes in yields but when combined with the strength of earlier figures, this could become a double-edged sword.

Consensus looks for the U.S. to have created or recovered from the coronavirus some 975k jobs last month, which is even more than the 915k blockbuster seen in March and may mean the latest figures are apt to disappoint.

“We expect the USD to trend lower because of the improving global economic outlook. Vaccination has ramped up in many developed countries. At the same time, strong US economic momentum is a positive signal for the global economy,” says Kim Mundy, a currency strategist at Commonwealth Bank of Australia.