The Euro-to-Dollar rate's newfound resillience was on show Tuesday following a rise in tensions between the U.S. and China and after German Chancellor Angela Merkel drew a red line in the sand in negotiations over the EU recovery fund ahead of Thursday's EU Council meeting, which is the highlight of the week for the single currency.

This adds to the negative investor tone that saw stocks and many currencies falter after California announced new ‘lockdown’ style restrictions on activity Monday to counter a rise in coronavirus infections, although the Euro’s decline against the Dollar was limited enough for the single currency to still rise against half its other major rivals.

Euro resilience comes ahead of a specially convened European Council meeting in which it’s hoped some form of progress toward an agreement between member states will be made, and after German Chancellor Angela Merkel appeared to draw a red line late Monday.

"EU leaders meeting on Thursday and Friday will set near term direction for EUR.  German Chancellor Merkel appeared to be pessimistic about an agreement this week after meeting Italian Prime Minister Conte.  EUR/USD can sustain a move beyond 1.1400 if EU leaders unanimously agree on a grant‑based EU wide recovery fund at this week’s summit. Otherwise, EUR/USD is at risk of moving lower towards 1.1100,” says Joseph Capurso, a strategist at Commonwealth Bank of Australia. 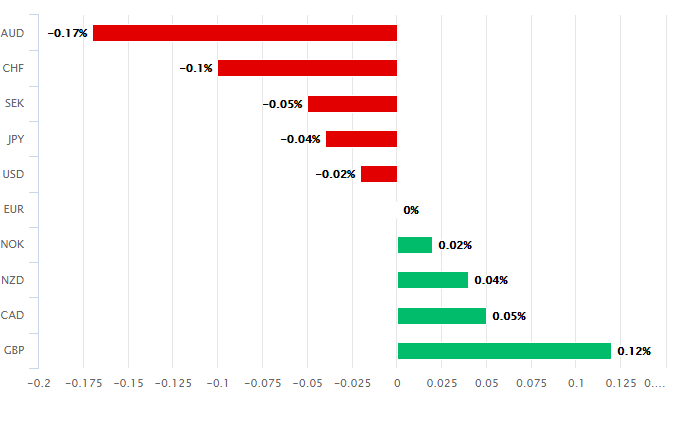 Merkel, said in a statement following a meeting with Italian Prime Minister Guisepe Conte that so-called frugal member states must not seek to reduce the size of the coronavirus recovery spending provision contained in the EU’s next multiannual budget, speaking to a key concern of the market.

The new rotating president of the European Council said it was unclear if a deal would be reached over the EU’s next multiannual budget or the recovery fund but confirmed a willingness to negotiate on the structure of the latter.

"The euro continues to trade on a firmer footing in the near-term with EUR/USD edging closer towards the top of its current tight trading range between 1.1200 and 1.1400. The pair has been consolidating at higher levels over the past month after adjusting higher in late May/ early June," says Lee Hardman, a currency analyst at MUFG. "The case for stronger euro would be reinforced further if EU Leaders reach a timely compromise agreement on an EU Recovery Fund which does not significantly water down initial proposals." 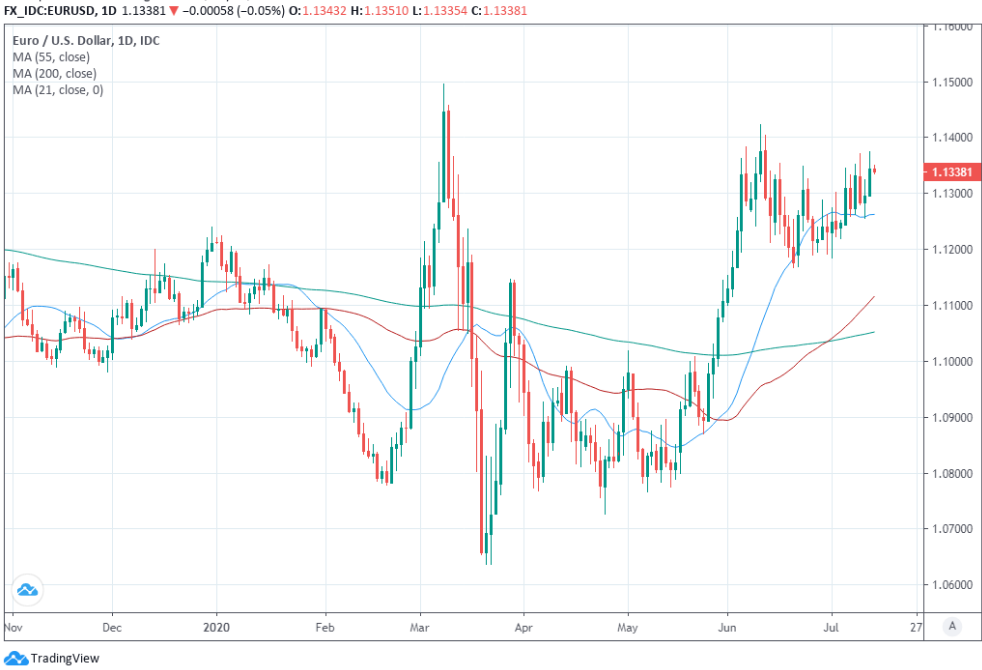 The 750bn package of grants and loans is key to recently improved sentiment toward the Euro but it must secure a unanimous endorsement from all members alongside the next seven year budget to see the light of day. Analysts have worried that objections from Netherlands, Denmark, Sweden and Austria, to a 500bn slice of the fund being taken up by grants, could lead to it being radically reduced in size or converted to a largely debt based programme.

"Our near-term tactical view on the pair has not changed. We would look to buy a daily close above 1.1400, but investors with a higher risk tolerance may wish to buy a close above 1.1350," says Stephen Gallo, European head of FX strategy at BMO Capital Markets. "Sentiment matters more for EURUSD this week than ECB policy; if global equity markets hold up while the confluence of news and economic data remains USD-negative, a re-test of 1.1400 is possible. The ECB may have a role to play here, but headline risk from the European Council meeting probably carries a higher weight."

Few expect substantial progress at this Friday’s meeting but many are hoping that a compromise over the division between loans and grants can be struck through the summer, which would enable the fund to become operational as the new multiannual budget period begins in January.

The Euro is up more than 5% against the Dollar since the first Franco-German recovery fund proposal was made in late May so will be sensitive to the size of the haircut given to the grant contingent of the fund. 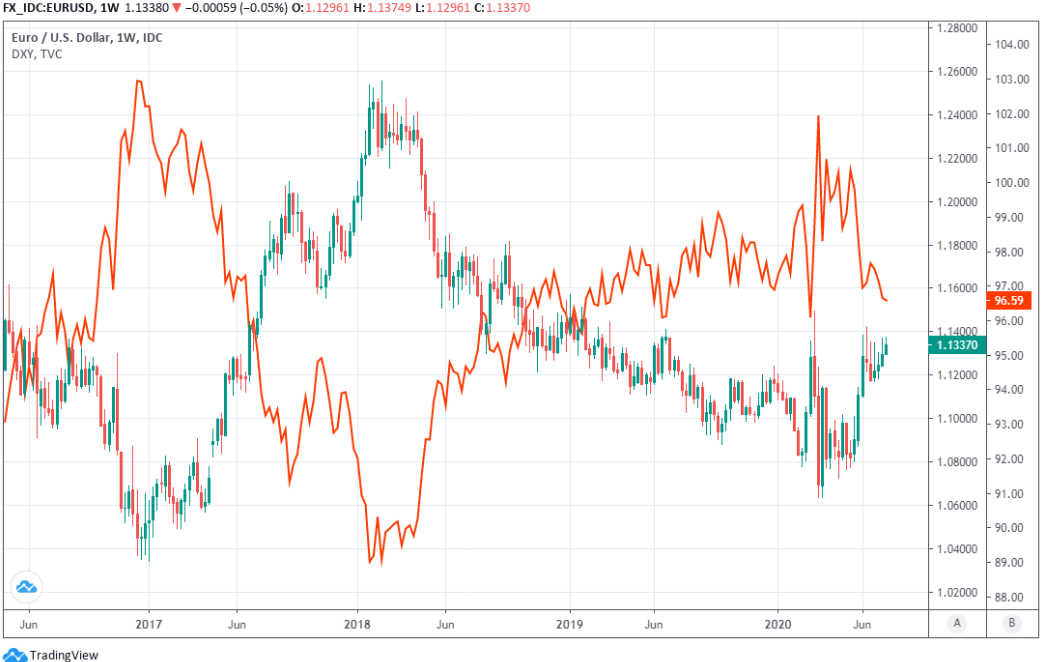 “The Euro is seen to appreciate across the board. EUR/USD still targets the June and current July highs at 1.1374/1.1422. EUR/JPY once more flirts with the current July high at 121.96. EUR/GBP bounces swiftly off the 55 day moving average at .8936. EUR/CHF shot back up to the 1.0700 region,” says Axel Rudolph, a senior technical analyst at Commerzbank. "The 1.1422 June high, together with the March high at 1.1495, represents quite formidable resistance which we would expect to cap at first. However a break higher is eventually favoured and would target the 2019 high at 1.1570."

The Euro-to-Dollar rate enjoyed the support of its 21-day moving-average at 1.1262 Tuesday and an increasingly bullish technical backdrop on the charts, which coincides with a darkening of the outlook for the Dollar Index that the Euro has has a strong negative correlation with.

But if the “death cross” on the Dollar Index chart drags it back to 94.88 in the coming weeks, in line with expectations of technical strategists at BofA Global Research, the outlook for the single currency could brighten further.

The last time the Dollar Index was quoted at 94.88, the Euro-to-Dollar rate was found trading comfortably above 1.16.

“EUR/USD's technical golden cross and its mirroring DXY death cross are providing some affirmation for USD bears and further USD downside,” says Paul Ciana, chief technical strategist at BofA Global Research. “Science aside, the art of technicals supports a Q3 decline. A bear flag pattern and bearish MACD cross imply the DXY could decline further this quarter. We estimated a decline to 94.88 and possibly 93.08 could follow should this "wave 5" decline be of similar size to the "Wave 1" in April. Should the DXY rally above the late June/July highs of 97.80-98 we would reconsider this view.” 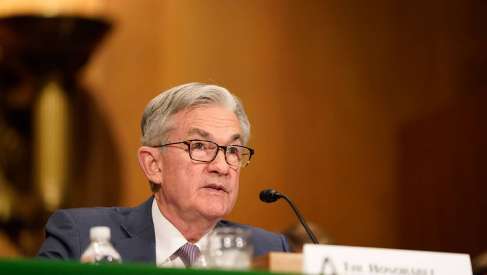 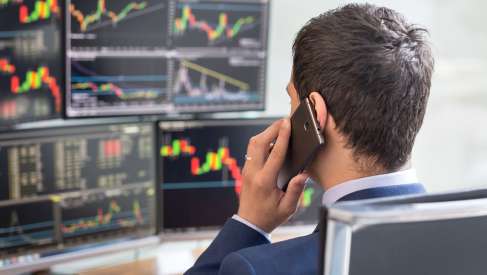