The Euro was on course for its largest intraday gain since August 05, 2019 this Thursday as stock markets and developing world currencies crumbled amid panic over the spread of coronavirus outside China, and some analysts have suggested it can go on rising at least in the short-term.

Europe’s single currency had risen more than 1% against the Dollar at its strongest point on Thursday, the largest one day move since last year when China sent its Yuan falling to a decade-low, prompting steep losses for other emerging market currencies in the process.

This is after the U.S. discovered its first unexplained case of coronavirus which has stoked fears about an outbreak in the world’s largest economy. Related headlines have sank the Dollar and lifted the Euro even as Italy quarantines some of its towns and counts a mounting pile of its own cases. Emerging market currencies have been sold as stock markets slumped across Europe and North America following a bloody Asia session, extending their earlier declines.

And to make matters worse the mortality rate of the disease appears to be rising, with the global number of confirmed infections above 82,500 Thursday and deaths at 2,810. That implies a mortality rate of 3.4%, up from below 2% when the infection remained in China, and could suggest among other things that there are potentially large and growing numbers of undiscovered cases lurking in various parts of the globe.

"The firmer Euro may be on the basis of massive yield compression all along the curve relative to US treasury yields recently, but also as the euro may have been the funding currency of choice for carry trades against higher yielding EM currencies and investments in US tech giants," says John Hardy, head of FX strategy at Saxo Bank. "Regardless, this is quite an impulse of EUR strength and will bear watching in coming days and weeks." 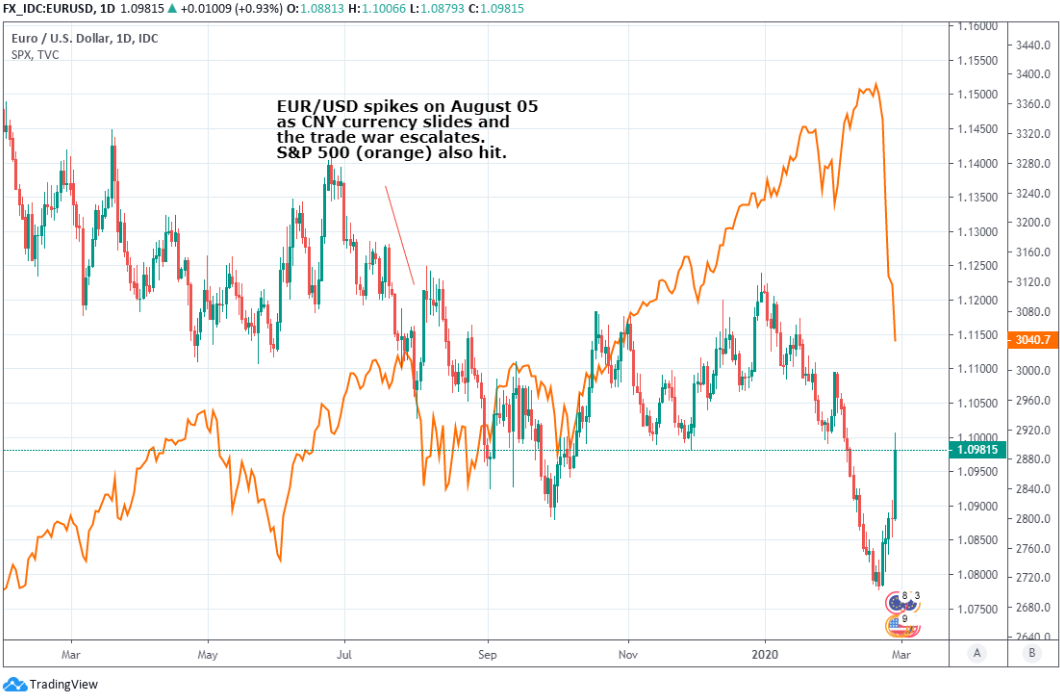 California Governor Gavin Christopher Newsom told a press conference the state was monitoring more than 8,000 suspected cases Thursday but that it lacks testing kits. Meanwhile the White House was reported to be considering using the Defense Production Act to force manufacturers to increase production of masks and protective clothing.

"The US has been far and away the best yielding currency of the majors in recent times - and with those dollars that are being bought, huge swathes are invested in stocks. So, the US dollar is strengthened but so also is the US stock markets. However, when the stock markets sell off, investors close positions which involves selling USD (weakening that currency) and buying back the funding currency," says John Goldie, an FX strategist at Argentex. "For the short term I think the euro continues to gain - which means back above 1.10."

So far Italy is the only European Union country in which there is a so-called “community spread” where those with no history of travelling to other affected areas or contact with affected people are transmitting the viral form of pneumonia from person-to-person. However, Germany’s health minister has said an outbreak in Europe’s largest economy is just a matter of time and others have echoed the sentiment if-not the exact language. 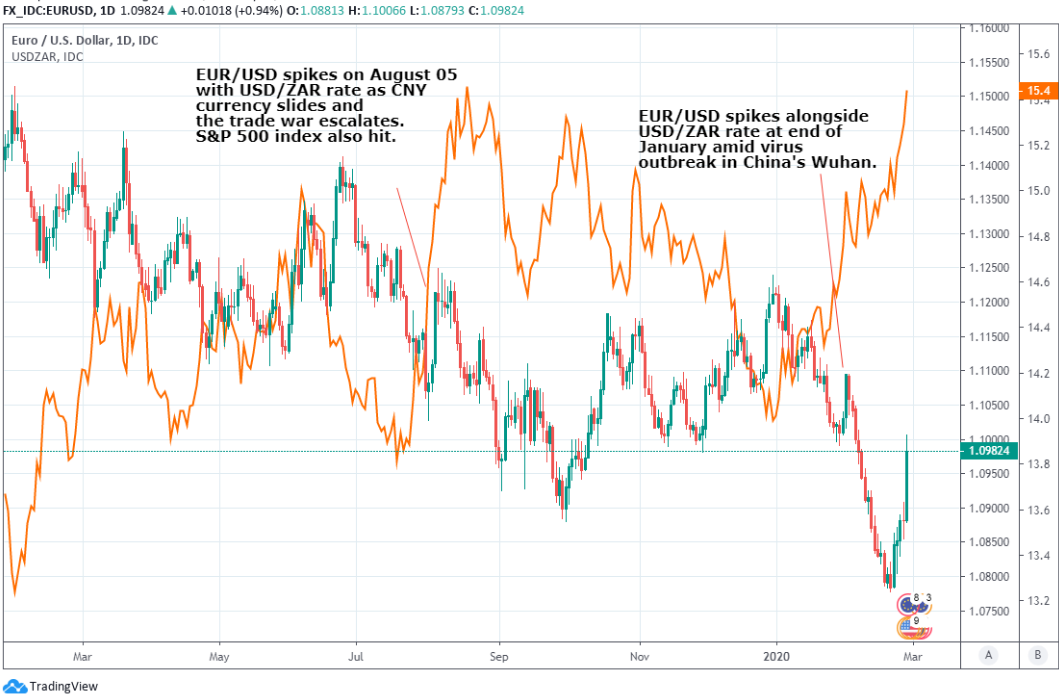 “The situation in Italy has certainly moved markets, but not in ways you would expect. Italian equities are outperforming the SX5E, spreads are wider, but EUR/USD has moved higher...it is more of a position wash out,” says Jordan Rochester, a strategist at Nomura. “Short-term squeezes in EUR higher are possible due to leveraged fund positions closing out of carry trades, but real money positions are still net long and any reduction could also provide a headwind for EUR once the dust settles.

August 05 and this Thursday were both characterised by carnage in emerging markets as well as elsewhere and it's no coincidence that the former was the last time the Euro scored an intraday gain in excess of 1% over the Dollar.

Negative European Central Bank (ECB) interest rates have made the Euro a popular 'funding currency' that sees investors borrow and then sell Euros in order to 'fund' bets on higher-yielding assets further afield. 'Carry trades" can result in the Euro-to-Dollar rate falling as stocks, commodities and emerging market currencies rise, only for the tables to turn as the apple cart rolls over.

It’s not clear what the path ahead has in store for emerging markets but Rochester says “rebalancing flows” could upset stock markets and keep the Euro supported into month-end, although he’s a seller of the Euro-to-Dollar rate and is looking for it to decline to between 1.06 and 1.07 over the coming months. Others however, are looking for a more protracted recovery.

“It is starting to nibble away at resistance - resistance can now be seen at 1.0926, the September low, and the November low at 1.0981, which together with the 1.1004 resistance line may hold the initial test,” says Karen Jones, head of technical analysis for currencies, commodities and bonds at Commerzbank in a morning research note. “Directly above here lies the 1.1138 55 week moving average, the 1.1188 one year down channel and the 1.1240 recent high. These remain the break up point to the 200 week ma at 1.1347.”