- Risk appetite recovery also set to weigh on the EUR.

The Euro-Dollar rate steadied after six consecutive days of losses Tuesday although the technical signals coming from the charts remain bearish while a global recovery of risk appetite could see ‘funding currency’ characteristics also weighing on Europe’s unified unit.

Euro-Dollar caught a breather Tuesday after breaking to the downside from a four-month range last week and following through with more losses on Monday. However, even in the event of a rebound over the coming days, some technical analysts say that upside will be limited given recent bearish developments on the charts.

“EUR/USD has eroded the early September and October 8 lows at 1.0941/26 and this puts the October low at 1.0879 back in the picture, together with the 1.0814/78.6% retracement,” says Karen Jones, head of technical analysis for currencies, commodities and bonds at Commerzbank. 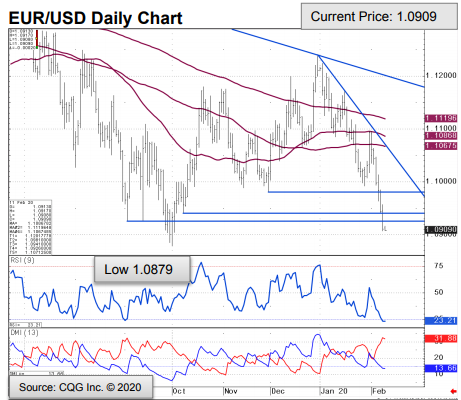 Above: Commerzbank graph of Euro-to-Dollar rate with technical indicators displayed.

Jones says that “intraday rallies are likely to halt around 1.0945/70” now the Euro has dropped  back beneath the 1.0940 level and that the single currency will face stiff technical resistance if and when it gets back to 1.0981/92.

Furthermore, and in order to alleviate technical selling pressure, the Euro ideally needs to recover the 1.1071 level. In the absence of a move above there, the downside is tipped by Jones to prevail.

“Our bias is still for a move to the 1.0880 previous reaction lows, if not a new low. A recovery back through 1.0985-1.1020 is needed to alleviate immediate downside risks and suggest a move back into a range environment before another test lower,” says Robin Wilkin, a cross asset strategist at Lloyds Commercial Banking. "Long term, we view the pullback from 1.2600 as corrective and look for a higher low over the 2017 1.0340 lows, ideally in the 1.09 to 1.08 region."

Technical pressures are growing at a time when risk appetites appear to be recovering from the recent knock dealt by the outbreak of coronavirus in China, which could be a bearish sign for the Euro given its 'funding currency' status. 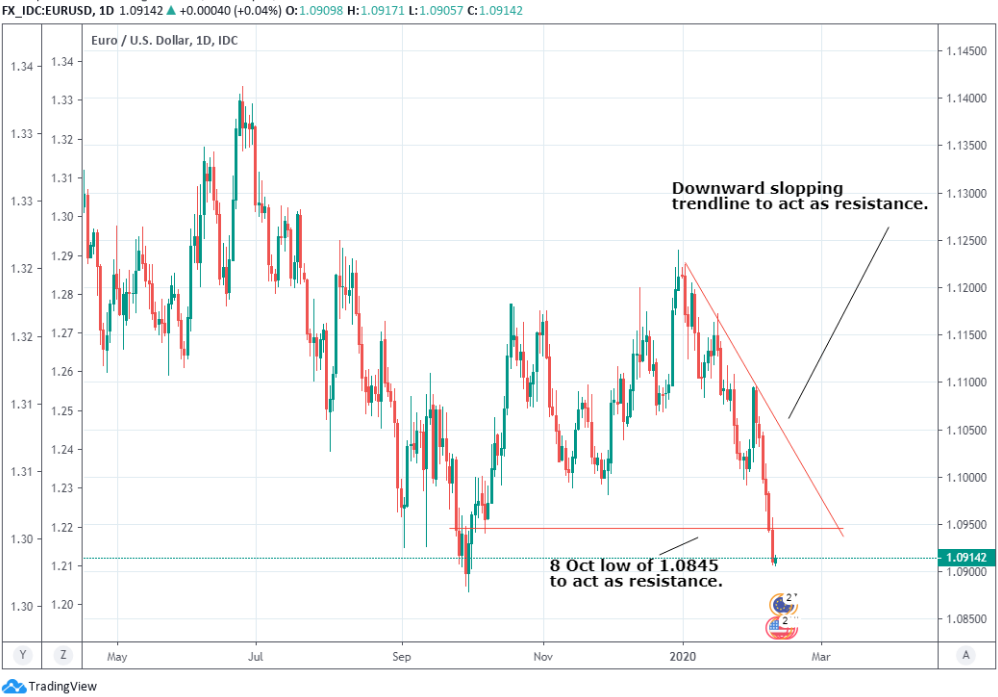 Above: Euro-to-Dollar rate shown at daily intervals, with resistance levels marked out.

The Euro-Dollar rate has occasionally risen in recent weeks as investors scrambled to exit bets on high-yield assets including those in emerging markets.

Some of those trades had been funded by borrowings in Euros and closing them out requires the single currency to be repurchased, which can lead the Euro-Dollar rate to rise temporarily alongside safe-haven currencies like the Yen.

"Given its open economy the Eurozone may be more sensitive to any second order economic impacts from the coronavirus than the US. Overall exports in Germany accounted for 47.4% of GDP in 2018, compared with a ratio of just 11.9% of GDP for the US," warns Jane Foley, a strategist at Rabobank.

Coronavirus has killed more people than the SARS outbreak of 2002-2003 and spread to dozens of countries after effectively shutting down vast parts of China's economy in recent weeks, although the growth rate for infections and deaths has slowed while the number of recoveries is said to be increasing.

This turning of the tables in official numbers has led market concerns over virus to ebb in recent days, enabling stock markets to resume their earlier climbs while oil prices and emerging market currencies have stabilised. And such an improving risk environment could easily see demand for Euro-funded 'carry trades' increase again, which would mean more pressure on the single currency.

“Pressure on the euro has increased in response to: i) building concerns over the health of the euro-zone economy which almost ground to halt at the end of last year, ii) weak growth in the euro-zone leaves it vulnerable to another potential negative shock from the coronavirus, and iii) fresh political uncertainty in Germany,” says Lee Hardman, a currency analyst at MUFG. 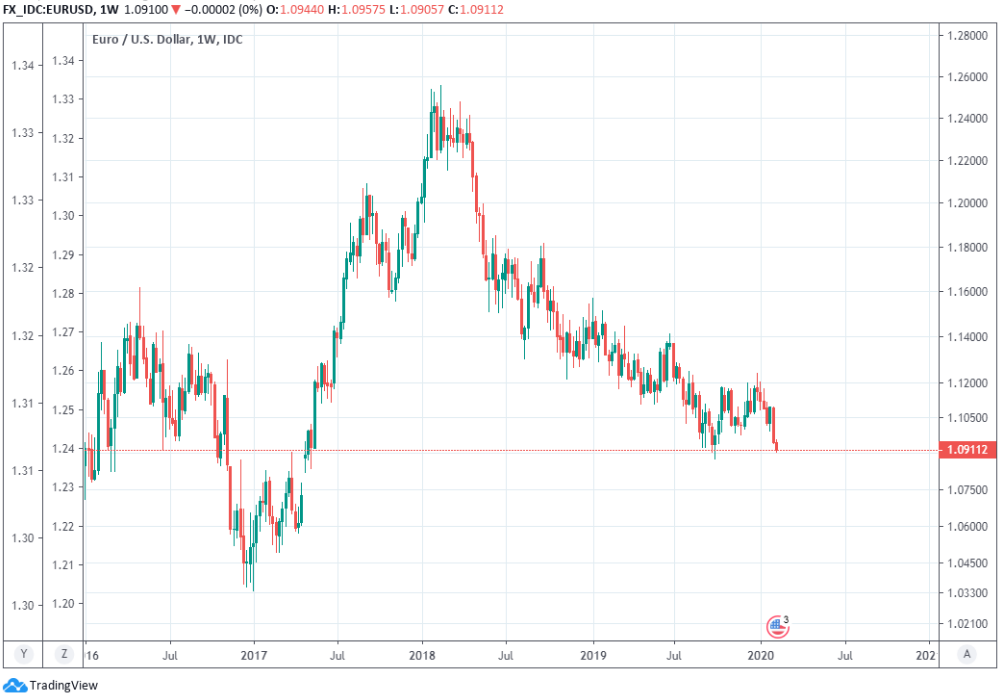 The Euro was dragged first beneath the 1.10 handle and then the 1.0945 level last week by a series of economic reports that have outright undermined the idea of a Eurozone economic recovery being in the pipeline.

German factory data suggested strongly last week that the industrial sector remained in a mire in December while retail sales figures also painted the domestic side of the economy in a softer light. This was after both the French and German economies were revealed to have contracted in the final quarter.

Eurostat estimates annualised Eurozone GDP growth of just 1% for last quarter, which pales into insignificance when contrasted with the 2.1% expansion of the exceptionalist U.S. economy and simultaneously illustrates the Euro-to-Dollar rate's predicament. The Euro has long been constrained by a disadvantageous interest rate differential with the U.S., which is not only close to 2% but also becoming entrenched by renewed transatlantic growth divergence.

“Consensus forecasts of US growth have improved relative to those of the rest of the world. The 2020 and 20201 GDP consensuses are steady at 1.8% and 1.9% respectively, while we worry about Chinese growth and the knock-on to Europe. Easy money hasn't damaged US appetite for US equities and if lower yields push money out of Treasuries, it mostly heads abroad on an FX-hedged basis at these rates. The dollar probably won't fall until US growth expectations deteriorate,” says Kit Juckes, chief FX strategist at Societe Generale.