- EUR/USD rising to top of channel

- Break above required to confirm continuation

- Euro to be moved by PMI data

- U.S. Dollar to be moved by housing and capital goods data

The Euro-to-Dollar rate is trading at around 1.1182 at the start of the new week after rising 2.61% in the week before. Studies of the charts are showing the short-term uptrend is likely to extend although the approach of a key trendline raises the risk of a correction unfolding.

The 4 hour chart - used to determine the short-term outlook, which includes the coming week or next 5 days - shows how the pair has been rising since the start of October and is now closing in on a key trendline. 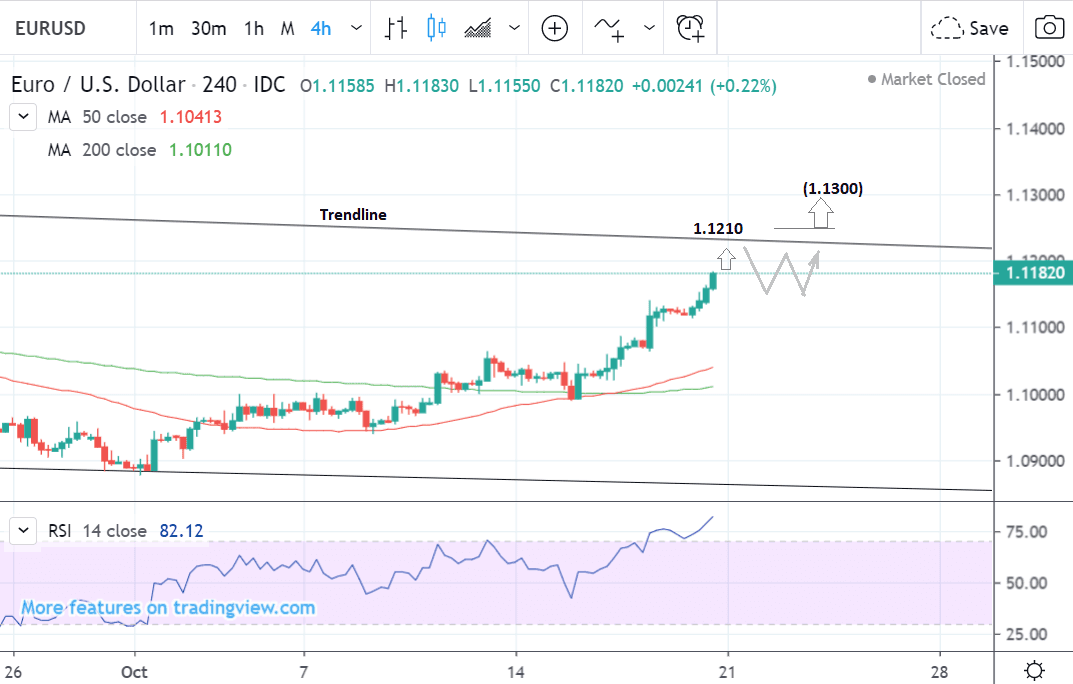 Whilst the old adage ‘the trend is your friend’ suggests there is a bias to the established bull trend continuing, the nearby trendline is an obstacle to further growth.

Historically trendline have been known to lead to corrections or even wholesale reversals of the prevailing trend.

The RSI momentum indicator is in the overbought zone above 70 which further increases the probability of a pullback though it does not necessarily entirely negate the uptrending bias.

It is not yet possible to tell who will win in the 'battle' between bulls and bears which will probably occur if the trendline is touched.

The persistence of the existing trend is usually favoured so assuming the pair can manage a confirmatory break clearly above the trendline, it should continue.

The daily chart shows more clearly how the pair has risen up to the top of the falling channel where the trendline is situated and the 200-day moving average (MA). 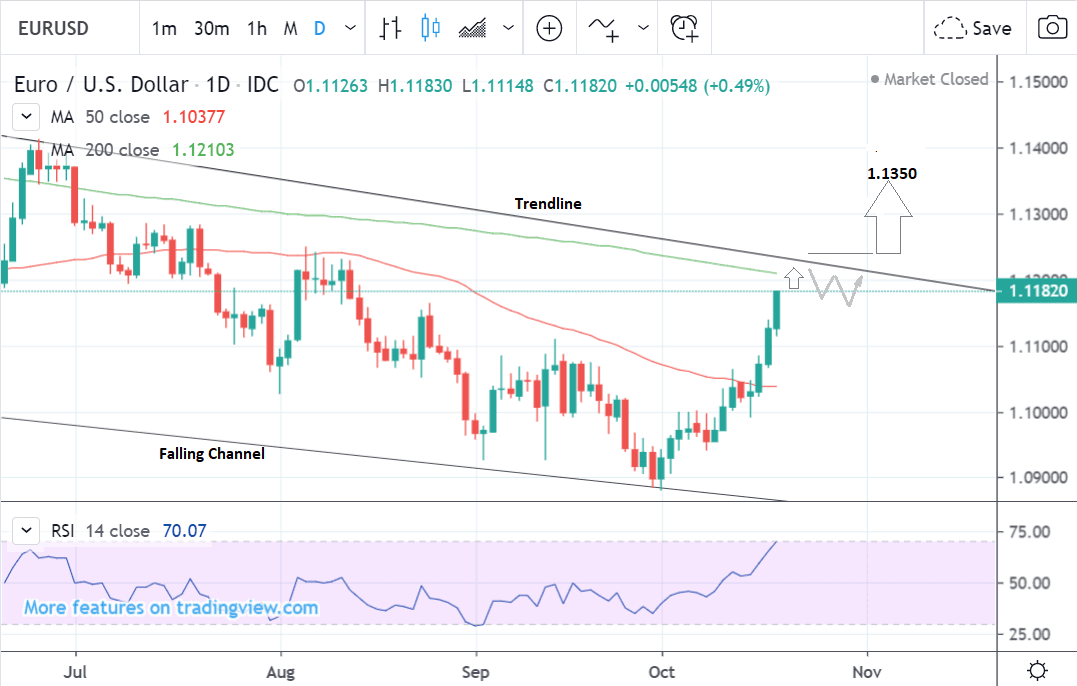 Both these levels are likely to present an obstacle to rising prices and could cause a correction or sideways consolidation to unfold.

Yet at the same time the short-term uptrend is strong as can be seen in the recent steep gradient of price action, and this supports more bullishness on the horizon, since the stronger the trend, the more likely it is to continue.

As mentioned in the analysis of the 4hr chart a clear break above the 1.1235 level would probably lead to a continuation up, in this case to a higher target at 1.1350.

The weekly chart shows the bigger picture and the next upside target at 1.1500 assuming the pair successfully breaks out of the falling channel. 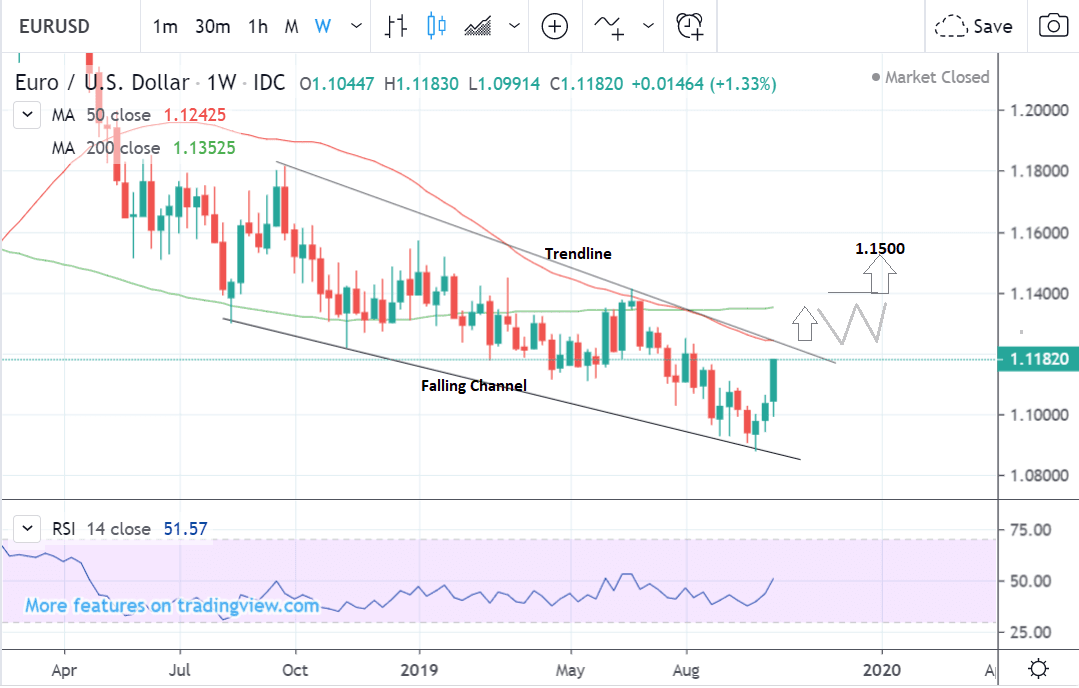 Initially a move up to 1.1350 is forecast followed by a possible pull-back and sideways trend.

The main event for the Euro is the European Central Bank (ECB) policy meeting; the main data releases are October PMIs and the German IFO business sentiment survey on Friday.

Preliminary estimates of October PMIs are probably the most impactful release for the Euro in the week ahead.

Manufacturing and Services PMIs are expected to show a rise to 46.0 and 51.9 respectively when released on Thursday at 10.00 BST, from previous readings of 45.7 and 51.6.

If they come out higher, as expected, the data might support the Euro as it rallies higher versus the U.S. Dollar.

The key event is the ECB meeting on Thursday at 12.45 but the impact on the Euro may be muted.

The ECB is not expected to change policy in October despite easing policy in September and the picture painted by the economic data since then mainly worsening after September PMIs undershot expectations and showed contagion from already weak manufacturing into services.

It is Mario Draghi’s last meeting as the president of the ECB before he hands over to Christine Lagarde although given the large scale initiatives announced in September he is not widely expected to want to go out with a policy 'bang'.

“We do not think the ECB will ease policy further at this upcoming meeting but do we think another 10 bps rate cut is coming in December,” says U.S. bank Wells Fargo. “Past that, we are skeptical the ECB will do much more, as its policy capacity with typical monetary policy tools, like rate cuts and QE, are clearly running low. At present, the Eurozone is running a consolidated budget deficit of about 1%, with some countries, such as Germany, in surplus. It looks increasingly likely that any meaningful positive policy shock will need to come from the fiscal side of the equation.”

The German IFO business survey may shed more light on the plight of the slowing German economy when it is released on Friday at 9.00.

The headline Business Climate Index is forecast to nudge lower to 94.4 from 94.6 in October.

The IFO is seen as a leading index for the economy. A substantially higher or lower result could even impact the outlook for the Eurozone economy given the importance of the German economy to the block, and therefore the Euro.

The two main releases for the U.S. Dollar in the week ahead are housing data in the form of new and existing home sales, and durable goods orders.

New and Existing home sales are forecast to slow marginally within a strongly performing market.

Conditions are benign for house buyers: mortgage rates remain at historic lows and this combined with resilient employment and wage data means housing has remained relatively immune from the slowdown in manufacturing and industrial sectors.

Although the consensus expects a more muted figure for existing sales in September, when data comes out on Tuesday at 15.00 BST, not everyone agrees.

“The effects of lower mortgage rates are becoming more noticeable in the housing market. Existing home sales beat expectations and rose 1.3% during August,” says Wells Fargo in an economic briefing to clients. “Through the monthly volatility, improved buying conditions should continue to entice buyers back into the market, and we expect existing home sales to trend higher in coming months.”

The same rationale goes for new home sales which are released on Thursday at 15.00.

“We expect the recent upshift in new home sales to continue, with new sales benefiting from many of the same tailwinds currently lifting the market for existing homes,” says Wells Fargo. “In addition, many builders have successfully shifted toward constructing more homes at lower price points, which will serve to satiate the fast-growing demand for entry-level homes and boost sales even further this year.”

Housing is said to lead the economy, so a sudden downgrade could impact the U.S. Dollar, especially coming after the negative retail sales data last week which was a warning regarding the hitherto resilient U.S. consumer.

Durable goods orders are likely to remain in the doldrums due to the close link with manufacturing and the trade war induced global slowdown.

What would be more surprising would be a recovery but that is not expected. Further weakness is likely to continue to keep up pressure on the U.S. Dollar.

Core durable goods orders, which gives a more accurate reflection of the general state of sales, is likely to show a -0.1% fall in September on a monthly basis.

“A number of factors will weigh on durable goods orders and capital spending more broadly over the coming months. Aside from Boeing’s 737 MAX issues still remaining unresolved and the strike at GM, trade uncertainty and languishing global economic growth have led to a slide in manufacturers and small businesses plans for capital spending, meaning durable goods orders should continue to struggle,” says Wells Fargo.