- Charts show EUR capped by resistance, warn of losses ahead.

The Euro found support Tuesday after the influential Institute for Economic Research (Ifo) index surprised on the upside for September, although the institute still had the German economy on its back foot in the third quarter and analysts are increasingly warning of more losses ahead for the single currency.

September's Ifo index reading was 94.6, up from 94.3 in August and a fraction ahead of the 94.5 consensus among economists, after business leaders reported improved levels of activity for the current month. However, the outlook for the months ahead soured once again.

Services and construction companies reported seeing their 'current situation' improve in September alongside the six-month outlook, which offset a further deterioration for manufacturing companies as far as the headline numbers are concerned. But the manufacturing sector remained in the doldrums this month and there is now speculation the downturn could be serious enough to sink the Eurozone economy in the months ahead, after already having likely dragged Germany into recession.

"This increase was due to a better assessment of the current situation. However, the outlook for the coming months deteriorated again," says Clemens Fuest, president of the Ifo Institute. "In manufacturing, the business climate has only one direction: downward. Companies were once again less satisfied with their ongoing business, and their expectations for the coming months remained pessimistic. The current demand development and production plans offer no promise of improvement in the coming months."

The Ifo survey polls more than 7,000 German businesses, asking them to rate the relative level of current business conditions as well as the outlook for the next six months. It carries weight with investors and economists because of the particularly large sample size.

"We always have to be careful fitting stories to these data, but it looks to us as if the ECB’s recently announced measured have succeeded in providing a modest lift to the current assessment, while expectations are still hampered by unchanged, and elevated, global uncertainty. Time will tell whether the central bank’s new policy announcements can lift sentiment further," says Claus Vistesen, chief Eurozone economist at Pantheon Macroeconomics.

Tuesday's report comes hard on the heels of IHS Markit PMI surveys for September, which again flagged a likely third-quarter recession for Germany and this time suggested that the Eurozone is also at risk of falling into recession during the months ahead. The German manufacturing PMI fell to its lowest level since the middle of 2009, a short time after the global financial crisis, while the composite index that measures both services and manufacturing output posted its steepest fall for seven years.

"Yesterday’s PMI data were an open goal for those with a bearish outlook on the euro area economy," Vistesen says. "The PMIs now point to clear downside risks to EZ GDP growth, though not a recession...We are not trying to wriggle our way out of the fact that the September PMIs pose a challenge to our base case that the EZ economy will muddle through amid a sustained recession in manufacturing. We will change our view if the September PMIs turn out to be a reliable guide for the Q4 survey data." 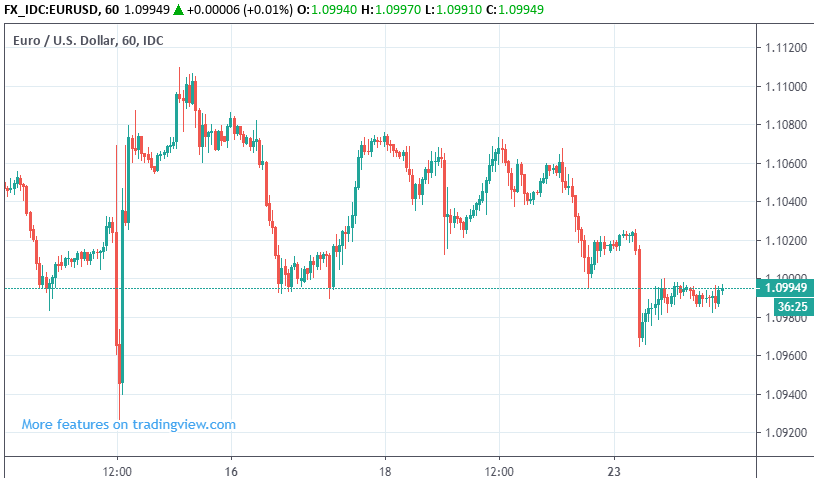 "Weakness in German manufacturing continues to be fully driven by slow external demand amidst uncertainty about trade and Brexit, and a generally slowing global outlook. The auto industry was again singled out as a sore spot," says Jane Foley, a strategist at Rabobank. "Yesterday’s PMI survey suggests that the weakness of the manufacturing sector is starting to spread. Demand for services is slowing as well. Particularly in Germany, services providers are starting to feel the slowdown in the domestic manufacturing sector."

The U.S.-China trade war has hurt Germany and Europe's export-dependent economies more so than it has the two protagonists in the last year and the impact that the ongoing tariff fight has had on the Eurozone growth and inflation outlook was a key driver behind the September European Central Bank (ECB) decision to cut its deposit rate further below zero and to restart the quantitative easing program only just wound up in December 2018.

"There is also a non-negligible risk of the US imposing, or at least threatening to impose auto tariffs on eurozone exports. This should re-appear on the market's radar in mid-November," says Chris Turner, head of FX strategy at ING. "We revise our EUR/USD forecast lower and expect the cross to move into a 1.05-1.10 range for the rest of the year. No respite in the US-China trade conflict, insufficient dovishness from the Fed and the dollar's mighty carry all suggest EUR/USD trades lower. The big change compared to previous years is that EUR/USD is no longer meaningfully undervalued." 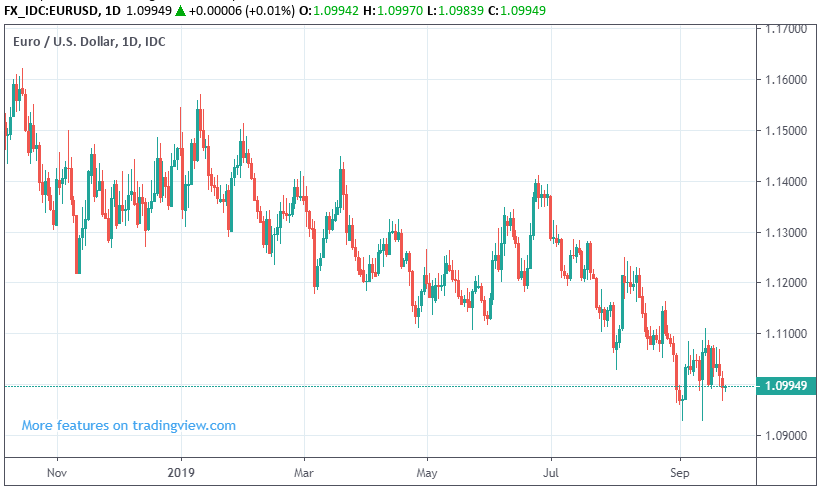 Hostilities between the U.S. and China have ebbed in recent weeks after escalating again through August, but the clock is fast ticking toward the October 31 deadline for the UK and EU to agree terms of the former's exit or risk a 'no deal' Brexit. That would threaten to put a tariff wall between German car manufacturers and their largest market in the UK, at a time when the sector is already on its knees and when the threat of U.S tariffs is also looming large.

The German and Eurozone economies will be contending with a 'no deal' Brexit, if one happens, just as a 180-day delay to a new 25% U.S. tariff on imports of cars from Europe is expiring. President Donald Trump announced and then delayed that tariff back in May pending the outcome of talks aimed at reducing EU levies and opening up its agricultural market to U.S. farmers.

"EUR/USD came under pressure yesterday and sold off towards the 1.0927/26 recent lows. The topside remains capped by the April and May lows as well as the three month resistance line at 1.1078/1.1110. Only a daily chart close above the August 26 high at 1.1164 would confirm a bottoming formation and put the 200 day ma at 1.1249 back on the cards. For now the market is on the defensive," says Karen Jones, a technical analyst at Commerzbank.