The Euro was under the thumb of a resurgent Dollar Wednesday after the latest Ifo Institute for Economic Research survey showed German companies becoming more pessimistic about their current business situation and future prospects, reversing some of the minor improvement seen back in March.

The Ifo index fell to 99.2 in April, from 99.7 previously, when consensus had been for a modest increase to 99.9. Beneath the headline, the current assessment component of the index fell from 103.9 to 103.3 and the six-month future expectations sub-index dropped from 95.6 to 95.2.

"The fall in the Ifo Business Climate Index for April, which was largely due to a decline in the reading for the manufacturing sector to its lowest level since 2012, is further evidence that Germany’s industrial recession has dragged on into the second quarter of the year," says Andrew Kenningham, chief Eurozone economist at Capital Economics. "While the fall in the headline index is small, the detail is consistent with the negative message from Markit’s flash PMIs released last Thursday."

Wednesday's Ifo reading comes less than a week after IHS Markit PMI surveys suggested strongly that the Eurozone economy, and particularly its manufacturing sector, entered the second quarter on a poor footing after having missed out on a first-quarter recovery in China. 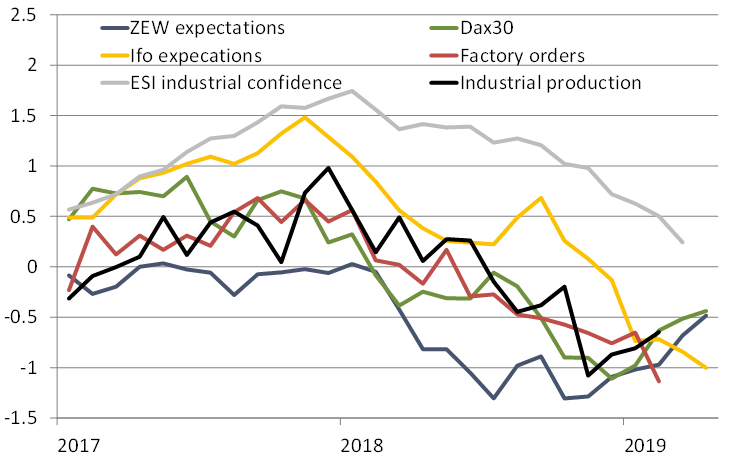 "Today’s disappointing Ifo survey for April suggests that the period during which German data are mixed or weak still looks set to last for a few more months. While the first rise in seven months of the Ifo business climate in March had raised hopes that the worst could be over for Germany’s industry-heavy economy, April’s renewed fall shows that patience is still warranted," says Florian Hense, an economist at Berenberg.

The Ifo polls 9,000 German companies in the manufacturing, services, trade and construction sectors, asking them to give their assessment of the current business situation and their business expectations for the next six months.

It is the most influential poll of German businesses and has undermined the narrative in financial markets that "green shoots" of recovery are now sprouting up across the world economy. The survey comes at a time when markets are positioning for U.S. GDP data due out on Friday that is now expected to be much stronger than was previously anticipated by the market.

"This does nothing to change our view that German GDP will increase by only around 0.5% this year, a pace which will help to keep growth in the euro-zone as a whole below 1%," Capital Economics' Kenningham adds. 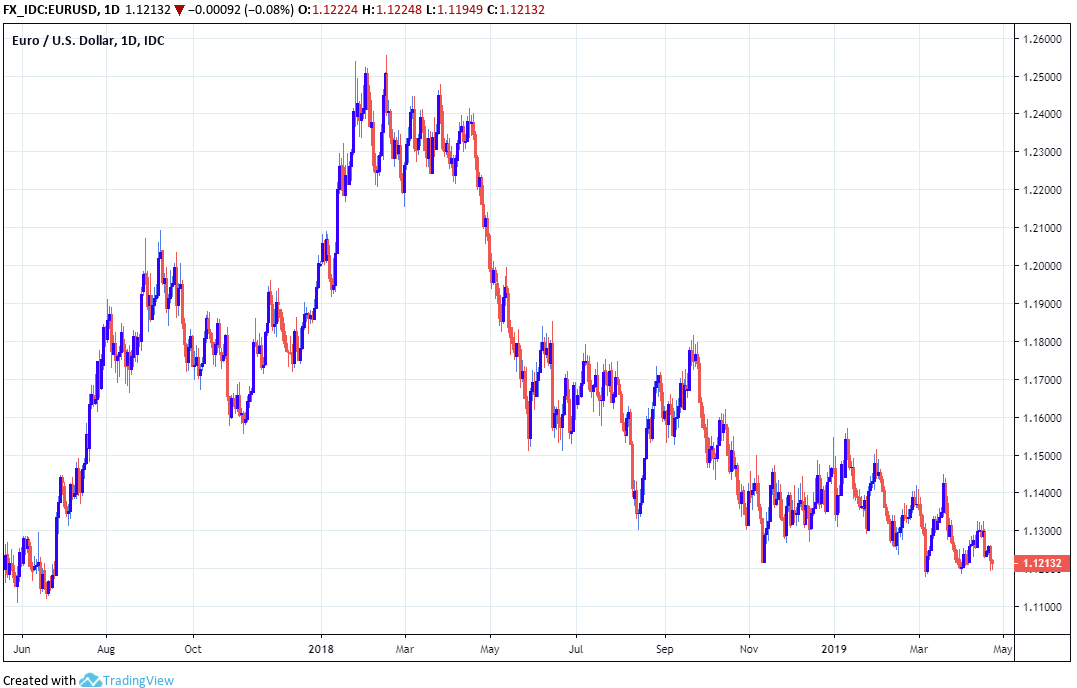 "The euro is teetering as negative sentiment persists after last week's disappointing PMI data and only the size of short positions and the extent of negativity are keeping it above the year's lows. It badly needs a dose of better data, or better news, and higher Bund yields would help," says Kit Juckes, chief FX strategist at Societe Generale. "I'm not very-optimistic we can hold the range though that said, a break won't take it dramatically further, just redefine the range."

"EUR/GBP continues to stabilise above the 55 day moving-average, and we should see further recovery this week. We should see a move towards the recent high at .8723 and .8818 (200 day ma). The market is expected to struggle on rallies to .8818/23, and only above here allows for a move to the October .8941 high," says Karen Jones, head of technical analysis at Commerzbank. 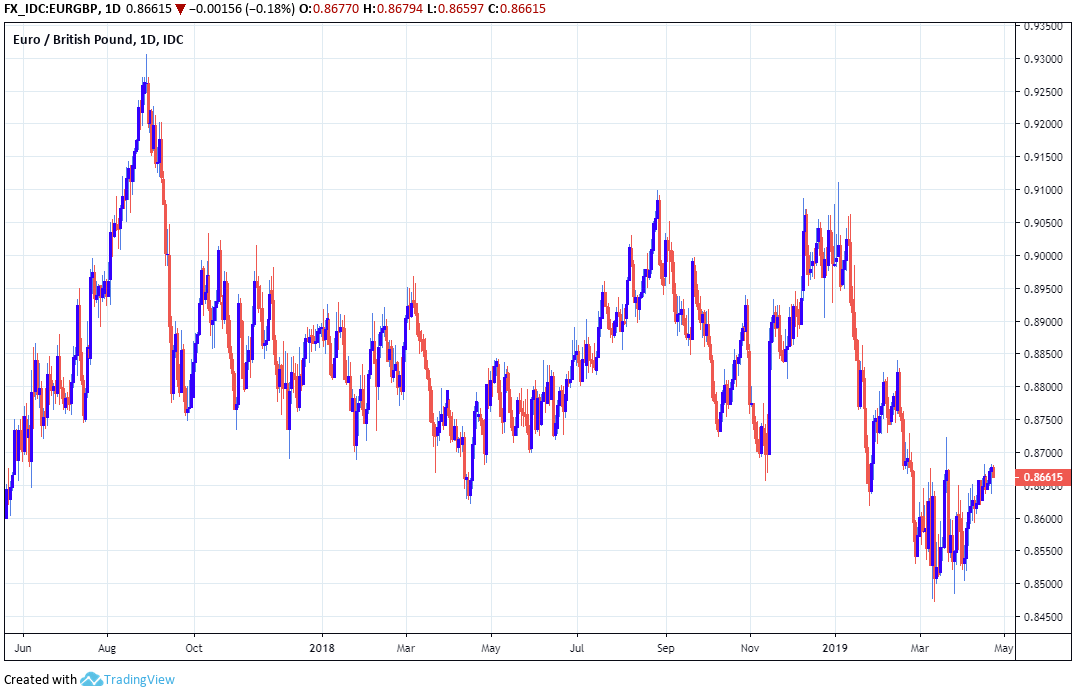 "We still expect the recovery to start by mid-year. If and when the industrial cycle among Germany’s export-reliant manufacturers turns, it could do so noticeably. Some uptick in domestic activity on top of fading external burdens could see to that. We are thus more optimistic than consensus for the outlook from mid-2019 onwards. Our calls for German and Eurozone growth of 1.6% each for 2020 are above the Bloomberg consensus of 1.4% each," says Berenberg's Hense.

Financial markets currently have laser-like focus on differences in the trajectories of major economies because economic growth differentials are often a reasonable predictor of the gap between yields on short-term bonds of two countries. Yields have significant influence over exchange rates because international capital tends to flow in the direction where the outlook for relative returns is most favourable.

Bond yield differentials move in response to changes in relative growth because of what the various economic numbers might mean for central bank interest rate policies across the world. Consensus still suggests the U.S. economy will slow sharply in 2019, ending the Federal Reserve rate hiking cycle in the process, and that a pick-up in growth across other parts of the world will put interest rate rises back on the table in Europe and elsewhere.

Such an outcome would be a death knell for the 2018-2019 Dollar rally that has helped keep the Euro-to-Dollar pair and many other exchange rates under the thumb during recent months, only the 2019 story thus far has not panned out in the way the market had imagined it would.

"For sure, the green shoots narrative is still in a highly budding phase, and recent performance of cyclicals and copper may eventually prove to be growing signs of complacency rather than a rational response to reduced recession risks. A look at surprise indices around the also shows that the green shoots are present primarily in China while e.g. EA and US data prints have continued to look gloomy," says Andreas Steno Larsen, a strategist at Nordea Markets.

Nordea advocated last week that clients buy the Euro-to-Dollar rate in anticipation of a move higher up to the 1.1650 level over the coming weeks and months, although the bank has a stop-loss set at 1.1187, which means if the single currency slips to that level Nordea will abandon the trade for fear of further losses.