- "We remain bullish on GBP against crosses like EUR" - Hans Redeker, Morgan Stanley

- European Central Bank tipped to be bearish for the Euro 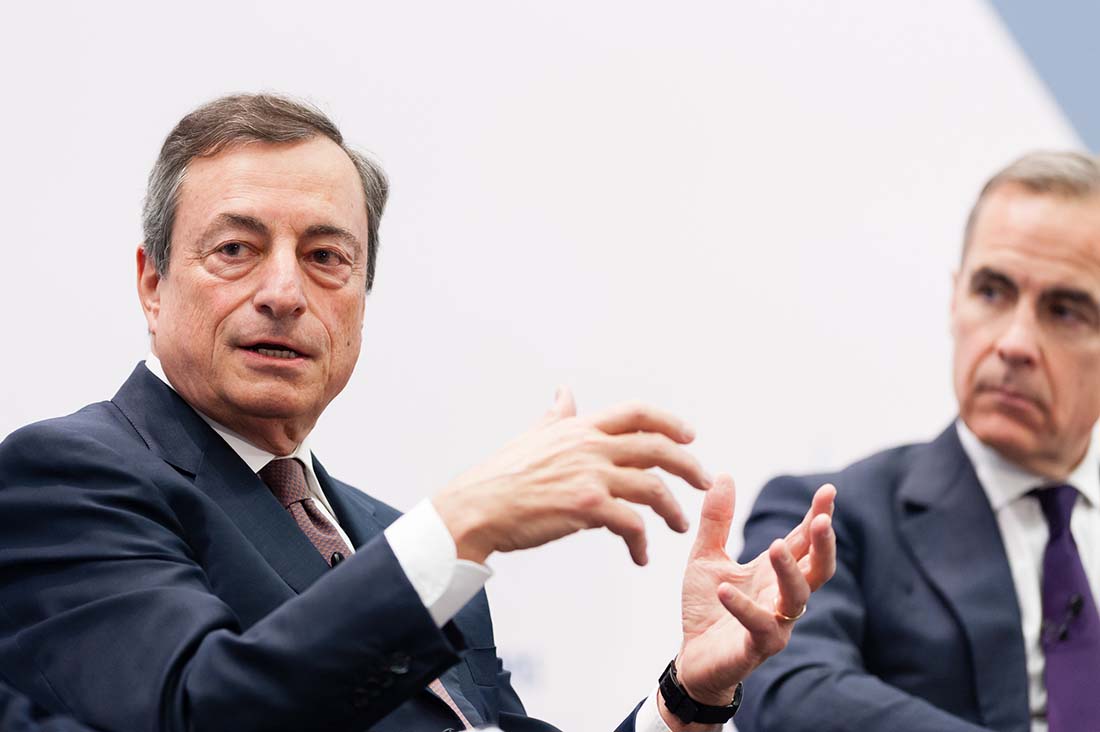 The British Pound is being favoured to advance on the Euro over the short-term according to analysts at Morgan Stanley who are eyeing the European Central Bank's meeting on Thursday as one potential catalyst that might facilitate such a move.

Thursday sees the Governing Council of the European Central Bank announce the outcome of their most recent policy meeting to determine monetary settings in the Eurozone and markets will be selling and buying Euros according to the tone struck by ECB President and his team.

No major decision, or call on future policy, is likely and nuances and tone will be key - should President Mario Draghi strike an optimistic tone we would expect the Euro to rally, while any message of caution could prompt Euro weakness as it would signal that perhaps the quantitative easing programme is destined to extend into 2019.

Markets have been bidding the Euro higher on the assumption the programme might end in September 2018.

The inverse of EUR/GBP trading lower is, of course, GBP/EUR trading higher. The call comes as the GBP/EUR pair has fallen back down to 1.1435 at the time of writing which means the exchange rate is back in the confines of a familiar range which it has inhabited for six months.

But markets are expected to stay nervous of the single-currency ahead of the event, and we have noted this could be why Sterling-Euro is finding support at the 1.14 level.

"For the EUR, concerns about the growth outlook could prompt the ECB to be less tolerant of a stronger EUR, and with the ECB meeting coming up, the risks to EUR downside remain," says Redeker.

The Pound-to-Euro exchange rate had earlier in April probed a fresh 11-month best just shy of 1.16, but the move higher ultimately capitulated as markets took fright from a set of soft UK inflation data and a warning from Bank of England Governor Mark Carney that the Bank might not raise interest rates in May.

This interplay between the Bank of England and European Central Bank in determining the value of the Pound and Euro confirms interest rates to be a key driver on currency markets at present.

However, the analysis from Morgan Stanley would suggest the pull-back in GBP/EUR is a temporary affair and the pair could therefore soon resume testing higher levels.

Of note, Morgan Stanley don't appear to be buying the view that Governor Carney has capitulated on a May interest rate rise and this should ultimately support the Pound.

"GBP to outperform EUR," says Redeker "we remain bullish on GBP against crosses like EUR. A narrowing in real yields between Germany and the UK should support GBP, particularly as inflation continues to fall in the UK and the BoE prepares to hike rates in May."

The 'real yields' mentioned in the above view reflect the gain - adjusted for inflation - that investors can expect to receive from holding government bonds. The difference between real yields in Europe and the UK is closely correlated to the exchange rate since cash tends to flow to where it can earn the most yield and this increases demand for that currency.

The reason investors can expect to earn more in the UK than in Europe is that the Bank of England is forecast to increase interest rates, which will in turn drive up bond yields. 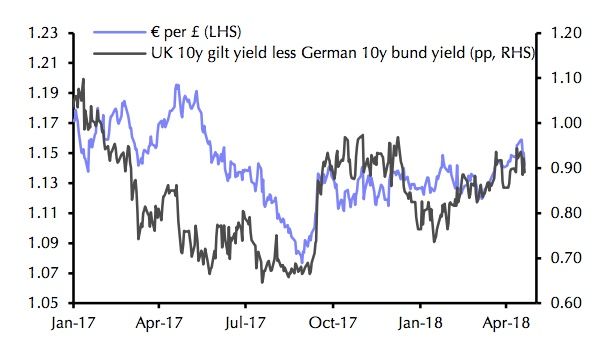 "While the relationship between relative interest rate expectations and the Sterling-Euro exchange rate has been poor, it has a better relationship with differences in bond yields. The yield on 10-year gilts has been climbing relative to that of 10-year bunds since the start of the year," says a note from Capital Economics, corroborating Redeker's observation.

Redeker also appears relatively confident the tempo of UK data releases - something that has spooked Sterling-bulls - is temporary, saying, "the weaker retail sales data were largely driven by poor weather, suggesting that the economic outlook for the consumer remains relatively robust."

"EUR and JPY weakness on a tactical basis look poised to continue," says Redeker, but he does warn this would likely be a short- to medium-term phenomenon as he believes over the longer-term the Euro is set to outperform. 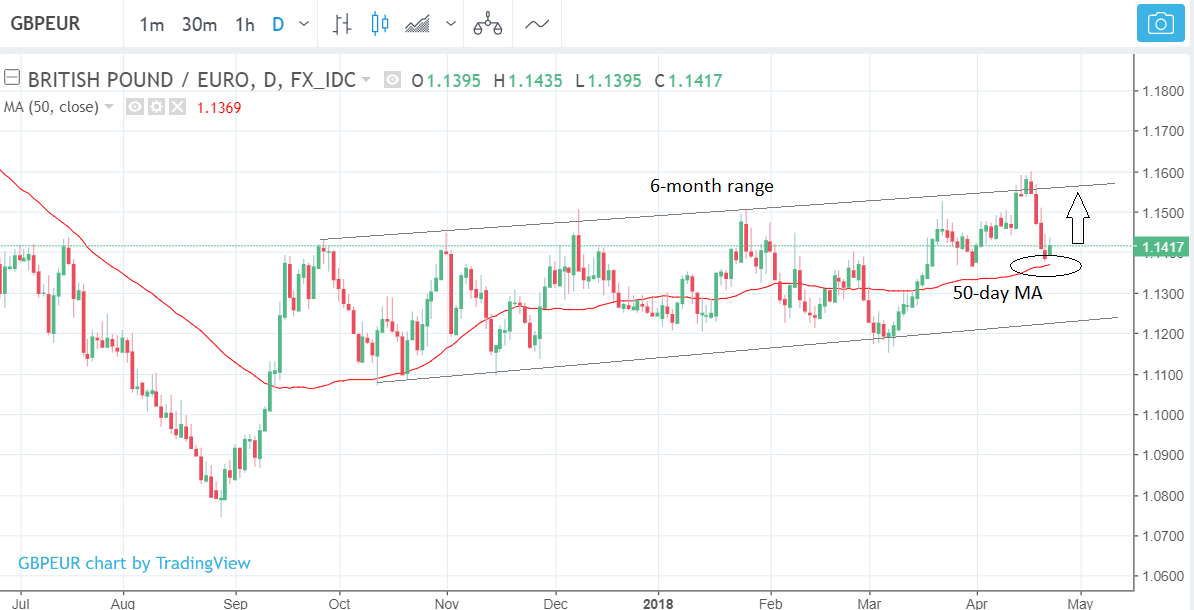 From a technical perspective, the location of the 50-day MA not far below the current level of the exchange rate provides the potential for the basis of a rotation higher in line with Redeker's stronger GBP/EUR thesis.

Large moving averages are often the site of pull-backs or reversals in the trend and so there is an increasing possibility the exchange rate could base, rotate and begin rising again.

Bank of England Likely to Maintain Higher Rates Trajectory, Could Lead GBP/EUR Back to 2018 Highs

The Pound has taken a knock of late as markets grew cautious on the potential for an interest rate rise taking place at the Bank of England in May thanks to a run of under-par economic data releases coming out of the UK of late.

The Bank of England Governor Mark Carney acknowledged this data in a press interview and warned that nothing was fixed when it came to policy decisions, something that markets took to be a stern warning that assumptions on a May rate rise and subsequent moves can never be set in contrete.

The Pound's recent retreat against both the Dollar and Euro is testament to this market repricing.

However, opportunity lies with the prospect of expectations for a May rate rise building once more.

"We still expect the MPC to hike on 10th May, but this is now a more finely balanced decision. That leaves the Pound vulnerable to further short-term selling," says Derek Halpenny, an analyst with MUFG.

But, MUFG believe there are still reasons to believe the MPC will look beyond the inflation and retail sales data this week - especially given the distortions related to cold weather in March.

"Governor Carney’s comments were not uniformly bearish either. He did also state that it was important to consider the overall momentum of the economy," says Halpenny.

If this interpretation is correct, we could well see the GBP/EUR exchange rate retest 2018 highs once more.