A leading investment bank believes the British Pound's long-term cycle of depreciation is nearing an end.

The Pound-to-Euro exchange rate has been tipped to rise by strategists at Deutsche Bank who say the end of the Sterling down-cycle is getting closer.

The call comes as Sterling embarks on a recovery against the Euro that has seen it rise from sub-1.08 in August to above 1.14 in September.

Deutsche Bank argue there is already a close relationship between the Pound and Brexit as illustrated by the high degree of correlation between Brexit-sensitive assets such as London property prices and Sterling. 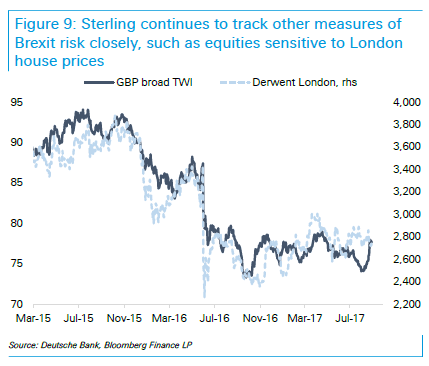 This will lead to a more bullish climate for the Pound especially versus the Euro.

“We view PM May's Florence speech on Friday and the initial response from Michel Barnier as tentatively positive,” said Harvey, who sees the UK moving increasingly to an EEA stance similar to Norway.

The positive stance has since been backed by European Commission President Donald Tusk who told reporters in London that he welcomes the adoption of a more pragmatic approach to Brexit negotiations by the UK.

As for the Bank of England, here too the outcome may be dependent on Brexit, as a more benign outcome would make it easier for the BoE to hike rates to where they ‘should’ be given inflation and unemployment.

Without the aid of an improving scenario with Europe, however, Harvey actually thinks “the bar for the MPC not to hike is high."

Also in favour of the Pound appreciating is market positioning which has turned neutral from negative with the Deutsche’s proprietary trading exchange “showing substantial buying” of late.

Because the market is now more evenly balanced between buyers and sellers the recent trend can extend.

There is also a lot of untapped upside stored up in the Pound which is undervalued according to most valuation methods, such as the FEER which is partially based on the current account, and interest rate differentials.

The Pound is trading below fair value largely because of political risk associated with Brexit.

Lift that off and the Pound will soar. 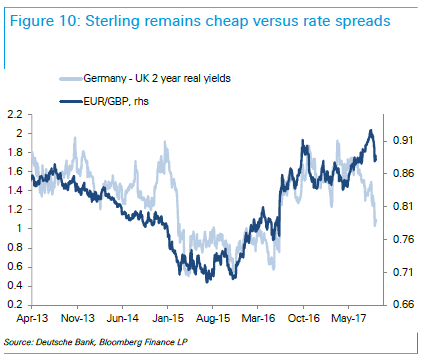 "Big picture, the end of the sterling down-cycle is getting closer," says Harvey. "Valuations are more attractive, in particular on FEER as the current account deficit has started to improve."

"On balance, we think the recent rally in Sterling can continue and would sell EUR/GBP," adds the analyst.

However the outlook is "becoming increasingly binary"  as "no agreement on a transition deal by year-end would imply significant downside," says Harvey.

Why year-end has been chosen as a cut-off for a transitional deal to be secured is not elaborated on. We would suggest regular updates on the progress of negotiations should flag the likelihood or not of a deal being possible. The exact timing should therefore be irrelevant.