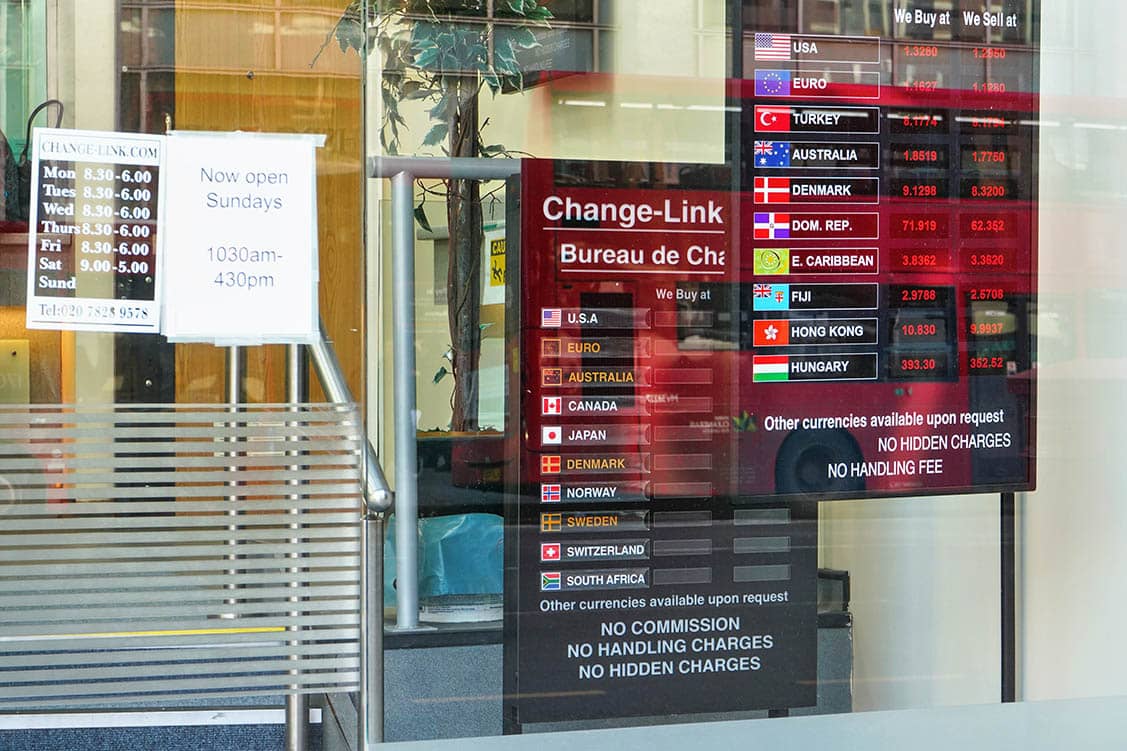 The Pound to Euro rate was dealt a setback last week as Sterling sustained widespread losses and the European single currency staged a short-lived rebound and signs of a souring UK economic outlook could mean it’s set to remain subdued with limited prospects for recovery over the coming days.

Sterling entered the new week close back beneath 1.19 and close to a multi-month low against the Euro after Friday’s UK economic data appeared to confirm that the inflation-induced squeeze on household incomes is now hampering the economy.

The Pound to Euro rate fell sharply alongside other Sterling exchange rates as financial markets reconsidered earlier widespread expectations for multiple further increases in the Bank of England (BoE) Bank Rate this year.

“The dismal UK March retail sales print has re-awakened the market to the cost of living crisis being endured by many households. Higher taxes are accentuating the impact of increased food and energy costs and eroding purchasing power,” says Jane Foley, head of FX strategy at Rabobank.

“Assuming a Macron victory in the French Presidential election we expect that GBP could struggle against the EUR. We maintain our year-end forecast of EUR/GBP 0.86 [GBP/EUR: 1.1627],” Foley said on Friday. (Set your FX rate alert here). 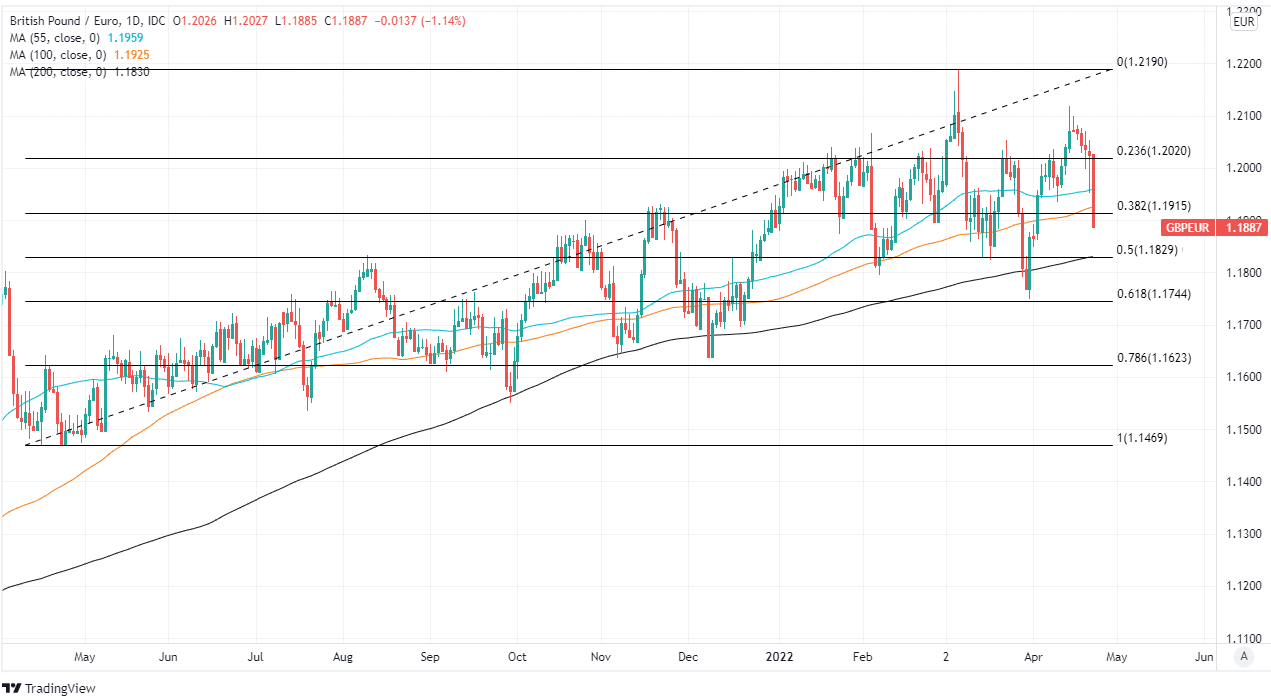 Last week’s slump in March retails sales fueled a sell-off in Sterling and appeared to vindicate the Bank of England for its recent warnings that the economic impact of the inflation-induced squeeze on incomes could reduce the extent to which interest rates needs to be raised further this year.

“While some of the relative weakness in the PMIs this month is likely due to the different timing of reopening momentum relative to the Euro area, it remains the case that BoE policymakers appear less willing to speed up the tightening process relative to peers, especially the Fed, while government policy has also been less supportive than anticipated earlier this year,” says Michael Cahill, a G10 FX strategist at Goldman Sachs.

To the extent that recent data was a sign of things to come from the UK economy, it potentially sets the BoE up to disappoint financial markets that  had continued to bet that Bank Rate will rise from its current 0.75% to more than 2% by year-end during recent weeks.

This potentially leaves Sterling vulnerable to further adverse surprises in UK economic data, although with the domestic calendar devoid of major appointments, the highlight for Pound to Euro rate this week is likely to be the release of Eurozone inflation data on Friday. 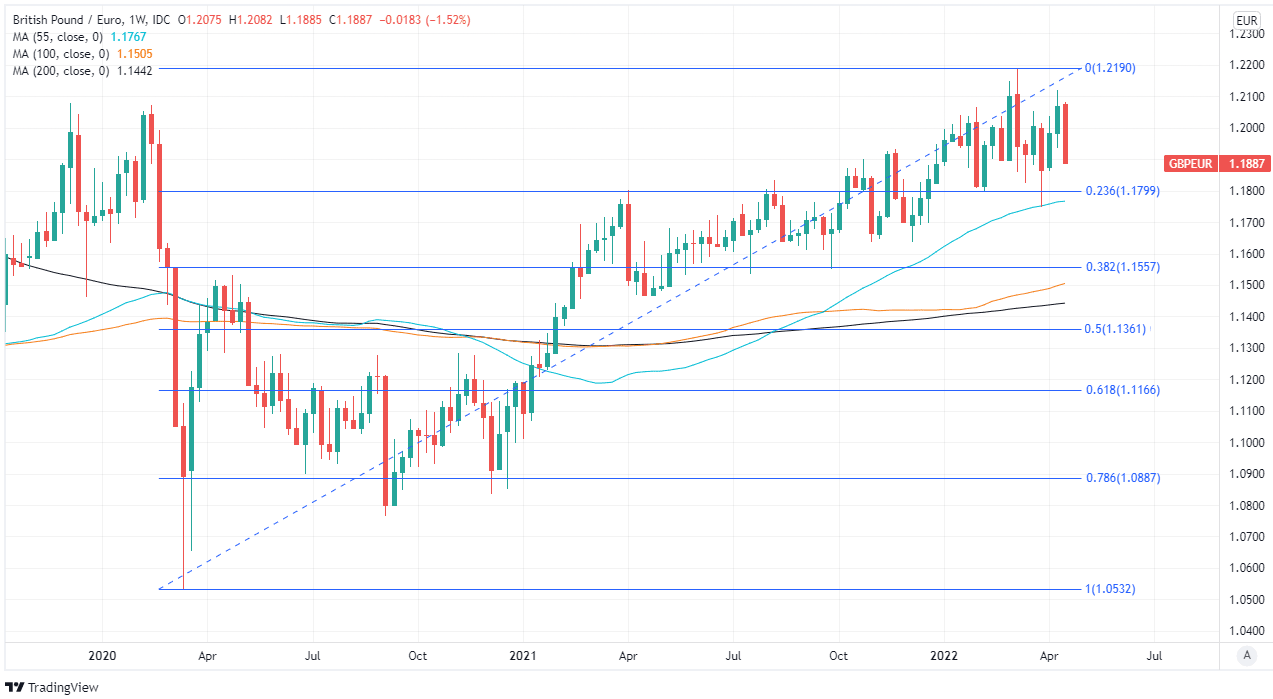 “Another upside surprise inflation surprise next week though could trigger a bigger upside move for the EUR given that speculation is building over an ECB hike a soon as in July,” says Lee Hardman, a currency analyst at MUFG.

Last week’s losses for Sterling were compounded by European Central Bank (ECB) policymakers’ calls for a faster monetary policy normalisation in Europe and vocal support for an increase in Eurozone interest rates as soon as July in response to growing inflation pressures on the continent.

To the extent that Friday’s April inflation figures support such arguments they could also limit the Pound to Euro exchange rate’s ability to recover from last week’s losses, potentially preventing it from getting much above the 1.19 level.

“The cost of living rise in the UK remains the primary driver of Sterling sentiment at the moment. Today’s collapse in consumer confidence and weaker than expected retail sales data provide an early taste of what’s coming. While BoE guidance seems to be for a front loading of tightening, current market pricing further out remains very hard to justify,” says Paul Robson, European head of G10 FX strategy at Natwest Markets.