The Pound gained against more risk sensitive currencies such as the Australian Dollar, New Zealand Dollar and Emerging Market names in what was a typical risk-off market.

The moves confirm the UK currency to be highly sensitive to global developments at present.

"The GBP is among the currencies that are particularly sensitive to spikes in risk aversion," says Valentin Marinov, Head of G10 FX Strategy at Crédit Agricole.

Underlying themes of rising inflation and concerns over a new wave of Covid-19 infections linked to the Omicron variant left investors keen to to reduce exposure ahead of the weekend.

In a market that is highly reactive to news regarding the new variant it can pay to adopt defensive positions ahead of the weekend in the event unfavourable news breaks while markets are closed. 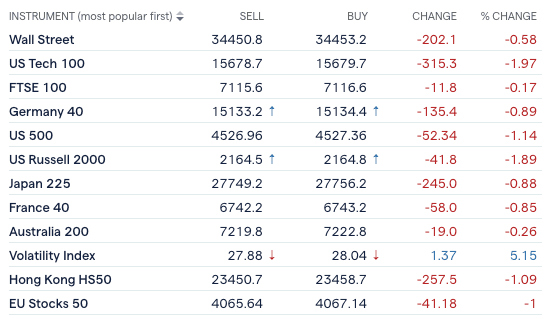 Above: Markets were a sea of red ahead of the weekend.

"Growth fears are taking centre stage across markets, as a slowing recovery threatens to put more pressure on stocks after a strong year for the headline indices," says Chris Beauchamp, Chief Market Analyst at IG, "until the extent of the hit from Omicron becomes clearer it looks like we have more downside to come in indices, with intraday bounces being sold."

Fears over the Omicron variant have meanwhile pushed back expectations for Bank of England interest rate rises which in turn lowers the incentive for international investors to buy Sterling denominated bonds.

"Moreover, the markets are continuing to pare back BoE rate hike expectations as worries about the growth-negative impact from the pandemic, the energy crisis and Brexit linger," says Marinov. 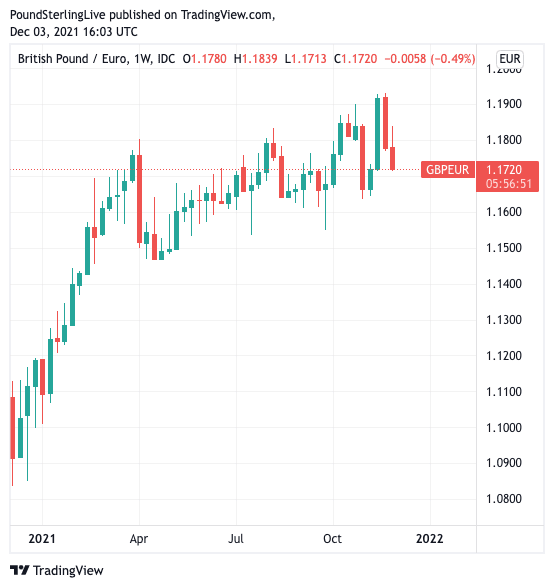 UK inflation is surging well ahead of the Bank's 2.0% target but MPC member Michael Saunders said on Friday Omicron would be a key consideration for the December 16 decision.

He said he sees "some advantages" in waiting due to Omicron, though also says delay could be costly too.

"The health impact from Omicron is still unknown, but markets certainly do not like the uncertainty," says Kjetil Martinsen, Chief Economist at Swedbank. "Bank of England’s Saunders earlier today also indicated their worries about the potential impact on the UK economy, shaving off the market’s view on a December rate hike."

Saunders emerged as one of the 'hawkish' members of the MPC in July when he began advocating the need for higher interest rates, which ultimately lead the market towards pricing a November rate hike.

The Pound rose in tandem with these building expectations.

But it fell after the Bank failed to raise rates in November with market attention understandably then turning to the December meeting as the next potential date for a hike.

The emergence of the Omicron variant has since lead the markets to rapidly price this prospect out, even before Saunders spoke, and this has been associated with weakness in the Pound to Euro exchange rate of late.

The Pound will next week trade according to broader market sentiment and news on the extent to which existing vaccines are able to offer protection against Omicron will be important.

Pfizer is anticipated to release initial data on the effectiveness of their vaccine on preventing infection, serious disease and death.

Expectations are that vaccines will prove less effective in preventing infection from the highly mutated Omicron variant, but expectations are high that they will still prevent serious disease.

There is no scheduled release data for the release but the head of BioNtech, creator of the Pfizer vaccine, said it could be out before Friday.

Positive news from the vaccine manufacturer could inject some much-needed confidence into markets and this could turn the tide on Sterling's losses against the Euro and Dollar.

However, those looking to buy Aussie, Kiwi and other risk sensitive currencies would likely see them appreciate in value on such an outcome.