The Pound-to-Euro exchange rate could be liable for further underperformance this week as the U.S. election outcome casts doubt over the UK's prospect of securing a trade deal with the world's largest economy while raising the stakes in the Brexit talks just as a key deadline draws near.

Sterling underperformed as investors priced-in an election victory by Democratic Party challenger Joe Biden, which was all but confirmed at the weekend when he was reported to have clinched as many as 290 electoral college votes by Sunday, more than the 270 needed to secure the presidency.

Control over the Senate however, remained to be determined by a January 05 run-off vote in the state of Georgia, meaning continued uncertainty about the balance of power in Congress where Republicans had a majority in the Senate while Democrats controlled the House of Representatives.

Prime Minister Boris Johnson congratulated the challenger this weekend although, as was expected by the market, President Donald Trump alleged foul play and announced legal action. Biden won congratulations after postal votes flipped a number of key swing states, setting the White House up for a change of hands on January 20, although Trump has alleged that this was not without illegal votes having been counted.

It's not clear whether Trump will succeed in casting doubt over the result with his allegations although what matters for Sterling is that markets believe the White House will be occupied by Joe Biden from January, which has implications both for the Brexit talks as well as the odds of a UK-U.S. trade deal.

"It could increase pressure on the UK to finalise a trade with the EU. That prospect is likely helping to dampen downside risks for the GBP," says Lee Hardman, a currency analyst at MUFG. "Overall, the prospect of a trade deal remains a positive potential catalyst for the GBP but doubts remain over the sustainability of any gains given weak UK fundamentals." 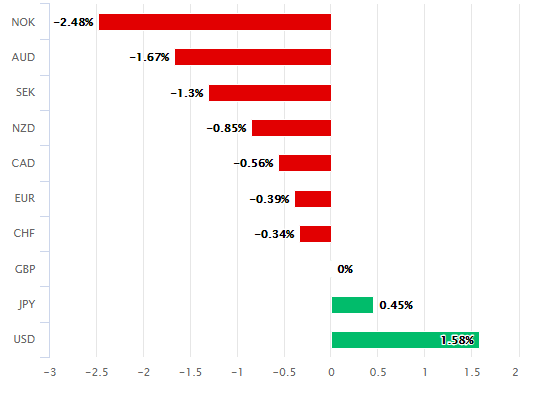 Biden is expected by some political commentators to be friendlier toward the EU than President Trump and less interested in deepening trade relations with the UK, likely enhancing the economic imperative for a Brexit deal with Brussels. However, the outlook for UK-US relations still remains subject to intense speculation with some commentators such as former Chancellor of the Exchequer Sajid Javid saying a Biden presidency would suit Britain owing to his insistence on a return to multialateralism and a 'rules based order' to international relations and trade.

Speculation of what a Biden wins for the UK will likely continue to mount over coming days.

"The devils advocate would argue that this makes a deal between UK and EU more likely as BoJo has no other “exit-plan” now that Trump is out. We still doubt that as BoJo has promised the population not to give in to Brussel demands," says Martin Enlund, chief FX strategist at Nordea Markets. "For now it may make sense to chase the Biden news via a long EUR/GBP position. Should we get a break-down of UK/EU negotiations, then it may turn in to the biggest “buy the rumour, sell the fact” event in years in EUR/GBP.

A 'long' EUR/GBP position is trader parlance for selling the Pound and buying the Euro.

Many analysts see a Biden administration as a positive omen for the Brexit talks, which continue this week, although his increasing prospect of victory wasn't taken well by the Pound last week.

It's possible the lesser chance of a trade deal with the U.S. will weigh on the Pound this week, although technical analysts at Commerzbank say it should find support around 1.10 in this scenario and that it could have scope to rise to the 200-day moving average just above 1.12 in the coming weeks.

"We suspect this will hold the initial test," says Karen Jones, Commerzbank's head of technical analysis for currencies, commodities and bonds, who bought the Pound around 1.1037 last week and is now looking for a move up to 1.1210. 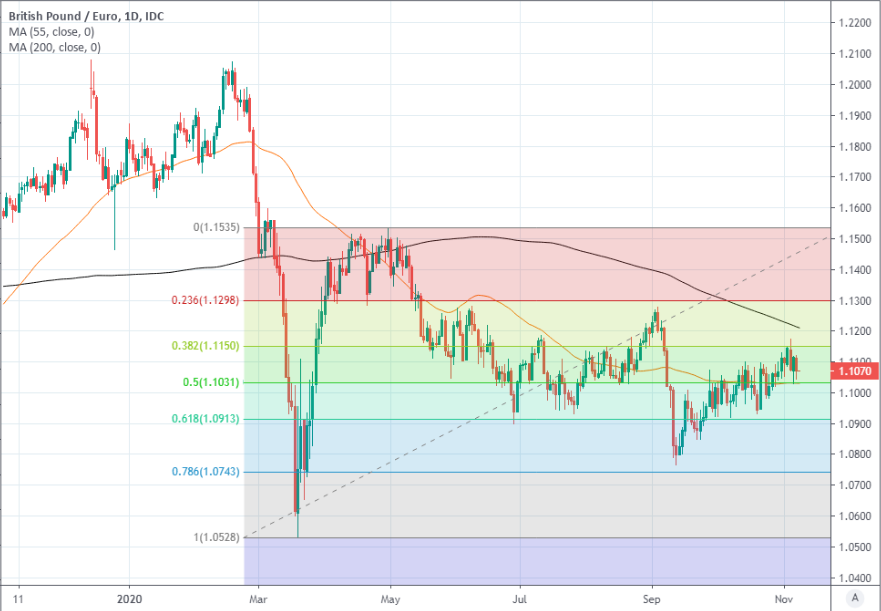 British negotiator David Frost said at the weekend that Prime Minister Johnson and European Commission President Ursula Von der Leyen are set to remain in contact this week as negotiations continue on differences over so-called level playing field commitments and fisheries access. The two sides are thought to have only until the middle of this month to reach a deal if it's to be ratified before the year-end expiry of the transition period.

"Next week needs a breakthrough to keep the pressure to the upside for sterling," says John Hardy, head of FX strategy at Saxo Bank.

With election results and the Brexit trade talks aside, attention may turn briefly at 07:00 on Tuesday and Thursday to jobs data for October and GDP data for the third-quarter, with the Euro also glimpsing at its own growth figures on Friday at 10:00. However, the data could easily go unnoticed by both currencies given that major European economies have since returned to 'lockdown' and are now expected to see fresh economic contractions in the final quarter.

"Domestic data should have a limited impact on the GBP price action (the currency reaction to the BoE meeting last week provided the case in point) with all the focus being on the UK-EU trade negotiation outcome," says Petr Krpata, chief EMEA strategist for currencies and bonds at ING.  "The UK EU trade negotiations are getting into the final phase, with the outcome possibly emerging over the next two weeks. We continue to expect an eventual agreement."

Consensus looks for the unemployment rate to edge higher from 4.5% to 4.7% although economists are likely to pay more attention to the claimant count and other indications of the pace of job losses last month. GDP is expected to have risen by 15.6% during the quarter, partly reversing the -19.8% fall seen in the second quarter that was spent mostly under 'lockdown'. Meanwhile, the Eurozone economy is expected to have risen by 12.7% after having contracted by the same number previously.

"This second round is different to that in the spring, as they allow the manufacturing, education, construction and real estate sector to remain open. This implies a smaller economic footprint (we estimate that roughly 20% of economies’ GDP is affected now vs. almost 80% in April); thus, we project much smaller sequential output contractions in Q4 for the euro area and the UK than those in Q2. However, it does put the region back into contraction at a time when China and the US seem able to continue to grow," says Christian Keller, head of economic research at Barclays. 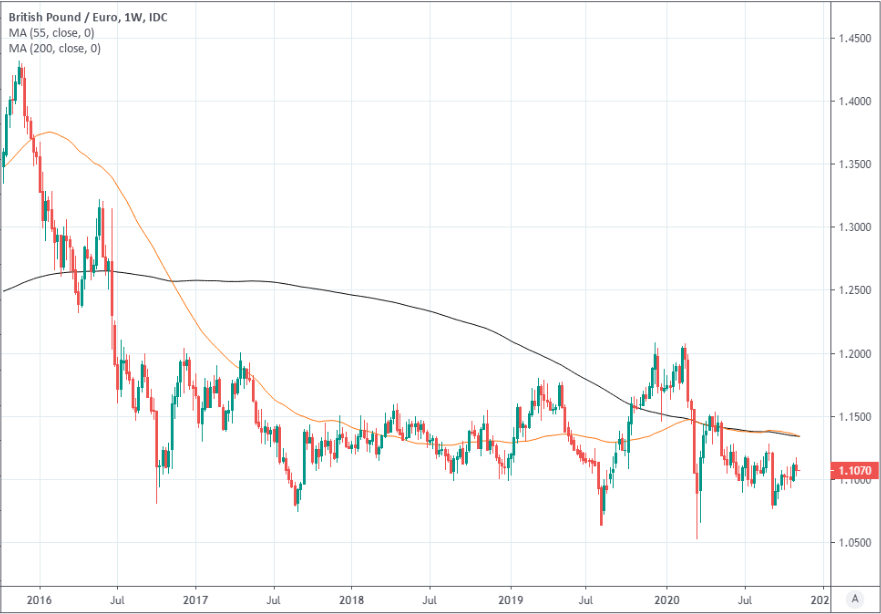 Above: Pound-to-Euro rate shown at weekly intervals with selected moving-averages.