- GBP/EUR vulnerable after bearish Friday close on the charts.

The Pound-Euro rate could be vulnerable to further losses this week after a bearish Friday evening close although investor risk appetite, the Bank of England (BoE) and market response to any leaked details from the government's lockdown exit plan will set the trajectory of Sterling.

Sterling fell almost one percent in the final session of the week after comments from President Donald Trump stoked fears of fresh trade tensions between the U.S. and China, at the open of a month that has seen risk assets underperform. The Pound has fallen by an average of -2.3% against the Dollar in every May since 2010, but tends to outperform the Euro in a month where 'seasonal flows' are an important influence on price action.

Friday's close took Sterling back beneath the 61.8% Fibonacci retracement of the 2020 downtrend in time for it to block the British currency's path higher on a weekly chart for a third consecutive week, although it also then fell below the 55 and 200-day moving-averages and closed beneath them for the week. Losses were enough to more than erase Thursday's gains, leaving the exchange rate quoted at 1.1373 and headed back toward technical support at 1.1281.

"EUR/GBP continues to consolidate sideways around the 200 day ma at .8730 and is to further range trade above the April low at .8675. While it holds we remain neutral," says Karen Jones, head of technical analysis for currencies, commodities and bonds at Commerzbank.

Jones says a daily close below 1.1281 could see the Pound-Euro rate slide back to 1.1118, and that any renewed climb that takes it above the 1.1519 level would negate her three-month forecast for a decline all the way back to the 2008 financial crisis low at 1.02. 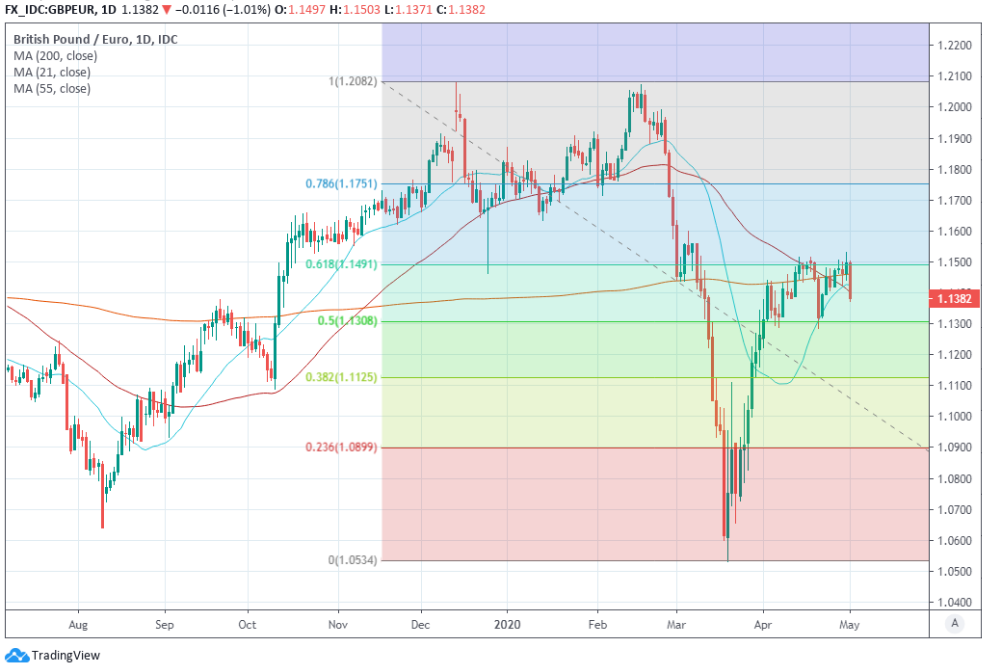 Above: Pound-Euro rate at daily intervals. Back below 61.8% Fibonacci retracement of 2020 downtrend, key averages.

The charts are turning bearish at a point when fundamental headwinds are mounting. The UK is among the last European countries to even think about exiting the lockdown that's crippled the economy since late March, it has a central bank that's widely expected to announce additional quantitative easing within a matter of weeks if-not days and the currency has to contend with a lack of progress in the Brexit negotiations with only eight weeks to go before the deadline to request an extension of the transition period.

"We see scope for GBP underperformance going forward," says Derek Halpenny, head of research, global markets EMEA and international securities at MUFG. "With the UK lagging behind as it unlocks and the BoE set to expand QE and the government grappling with Brexit, we continue to see downside risks."

Prime Minister Boris Johnson is expected to set out a plan for lifting the UK lockdown next Sunday and details reported by the Telegraph at the weekend suggested senior years students will be able to return to school from June 01.

It's not clear how soon nonessential businesses will be able to reopen although it's growing increasingly likely that any such date will be some weeks after most other major European economies have reopened. Germany, Italy, Spain and France have all set out plans that will see many restrictions relaxed this month, which will mark the beginning of their economic recoveries and risk leaving the UK and its currency sticking out like a sore thumb to investors.

"Of interest will be the Bank’s economic assessment of the impact of and recovery from the virus effects in the May Monetary Policy Report (released at 7.00am BST), and any signals therein. This will likely take the form of a scenario analysis (as opposed to a central forecast) based on a number of assumptions, akin to the OBR’s analysis," says Fabrice Montagne, an economist at Barclays. 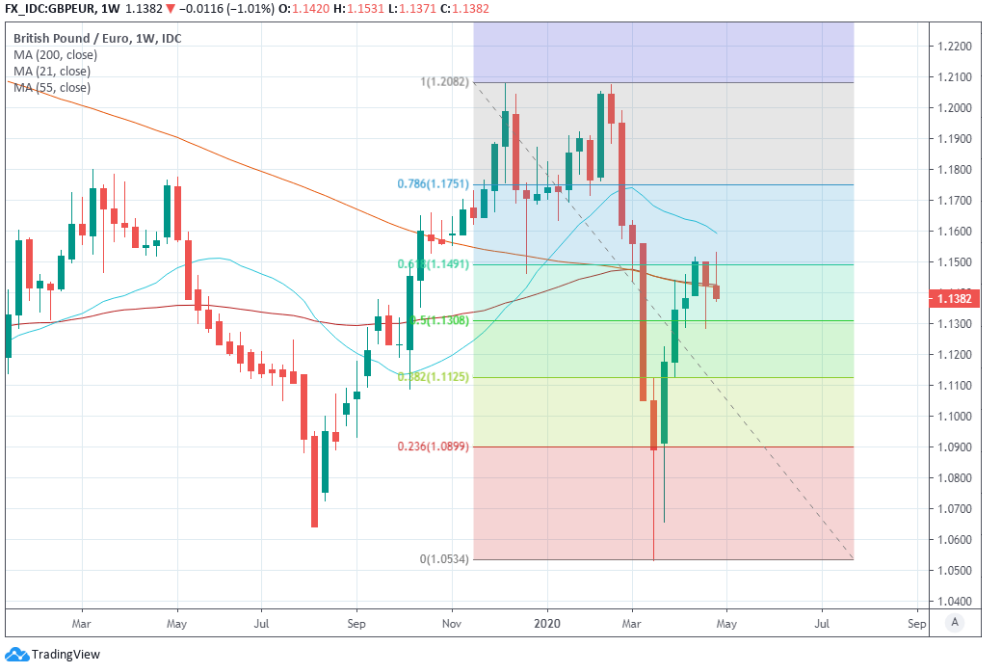 Above: Pound-Euro rate at weekly intervals. Back below 61.8% Fibonacci retracement of 2020 downtrend, key averages.

Investors will contemplate the implications of a slowcoach UK lockdown exit with the May BoE monetary policy update looming over the horizon. The Bank has already cut rates to what it considers to be the floor, at 0.25%, so the market won't be looking for and interest rate cut although it will be listening for clues on the likely timing of the next announcement about quantitative easing.

The BoE has already increased the amount of government bonds it intends to hold by £200bn this year to aid the economy through the coronavirus crisis but its widely expected to expand the programme even further in the weeks or months ahead given the sheer scale of the government's 2020 funding requirement. Halpenny says the debt management office intends to raise £225bn from the markets for the government in the next four months alone, which is in excess of 10% of GDP.

"Brexit uncertainty adds an additional layer to the economic calamity faced by the UK’s peers. Given concerns that the future arrangements between the UK and the EU may not be resolved by June, we expect GBP to be under pressure. We see EUR/GBP at 0.88 on a 1 to 3 month view with upside risk," says Jane Foley, a strategist at Rabobank.

The BoE will announce its latest policy decision and update its economic forecasts on Thursday at 07:00, an earlier than usual time, while markets will be on the lookout for further details of the lockdown exit as well as developments on the Brexit front as talks continue on video-conference. With UK fundamentals aside the Pound-Euro rate will also be influenced by investor risk appetite and possibly the outcome a German Constitutional Court ruling on the legality of the European Central Bank (ECB) quantitative easing programme. The decision is expected some time on Tuesday.

"We do not expect the court to rule that the ECB’s “Public Sector Purchase Programme (PSPP)” violates the German constitution. Such a step could otherwise trigger serious turmoil in markets as well as an unprecedented clash between German and EU law. However, we need to watch the risk that the court could spell out conditions for the ECB’s sovereign bond purchases that could make it more difficult for the bank to use this part of its monetary toolkit flexibly and efficiently," says Holger Schmieding, chief economist at Berenberg.