Sterling surged into the weekend amid a broad retreat by the U.S. greenback which, when combined with the scale of earlier losses suffered by the Pound, helped the British currency to outperform most of its major rivals. This lifted the Pound-to-Euro rate by 2.5% over the course of the week, with around half that gain coming on Friday alone, helping Sterling to reverse much of its March decline before closing the week back above the 20-day moving-average,

Gains built despite revelations that Prime Minister Boris Johnson and Health Secretary Matt Hancock have both contracted coronavirus, which wobbled the Pound briefly. Coronavirus has exacted a human toll on the government but the policy response path was already clearly laid out long before then and given that implementation of that response is now well underway, the impact of this on Sterling might be limited to Friday's knee-jerk move lower. 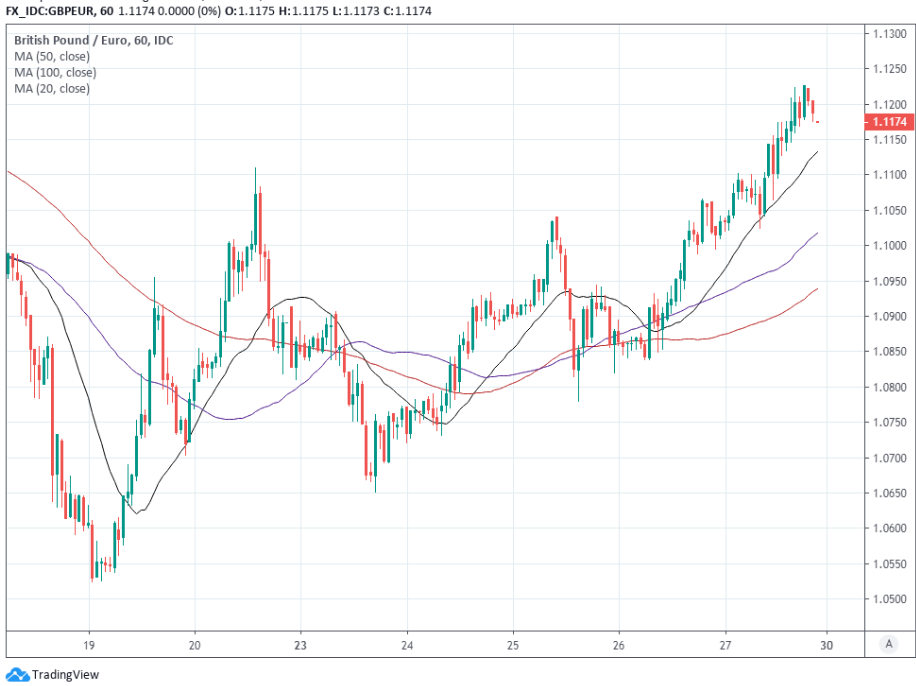 The virus could take the PM out of action for weeks but wouldn't stop the government implementing the already-set-out plan to plug the hole that's been torpedoed into the side of the economy by the coronavirus shutdown. This puts technical and international factors in Sterling's driving seat for the week ahead.

"EUR/GBP is in consolidation mode near term," says Karen Jones, head of technical analysis for currencies, commodities and bonds and Commerzbank. "We would allow for some further near term consolidation and currently are unable to rule out a corrective set back."

Jones says the Pound-to-Euro rate could see an upward correction back into the 1.1420-to-1.1576 range over the coming days but that, ultimately, the technical picture suggests Sterling is on course for its 2008 low of 1.0200 against the Euro. Jones forecasts that 1.02 will be seen within the next three weeks and that once there, Sterling could be weighed down by the gravitational pull of parity for the next three months. And others concur too.

"The price action on the monthly chart implies that the bias is skewed in favour of a break higher towards the all-time high at 0.98029," says Piotr Matys, a technical strategist at Rabobank, also tipping the Pound-to-Euro rate for a decline to 1.02 over the coming months. 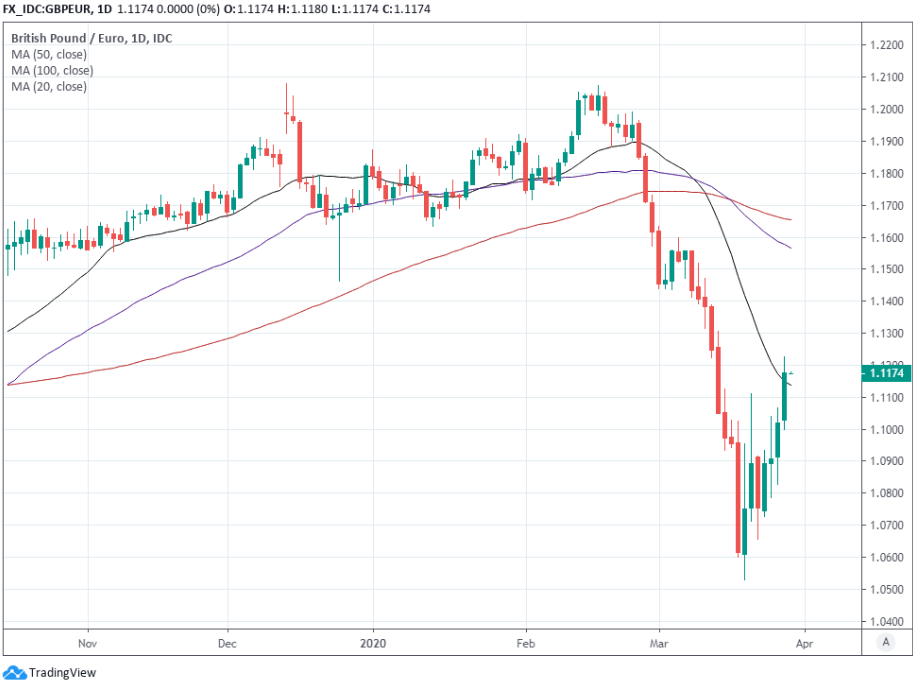 Above: Pound-to-Euro rate shown at daily intervals, alongside 20-day, 50-day and 100-day moving-averages.

The charts are pointing to a period of consolidation for Sterling followed by an eventual move lower but it could be the direction of the Dollar that has the greatest influence on the Pound-to-Euro rate in the coming days, given that Sterling has proven less successful of late at fending off an advancing Dollar than its European counterpart has. The Pound-to-Euro rate is effectively the sum of GBP/USD over EUR/USD.

"The initial enthusiasm to government policy responses to the crisis could start to fade in the coming days. We believe the Fed’s action greatly limits the risk of a renewed surge for the dollar but the sharp USD sell-off we have seen this week is unlikely to be repeated until clearer evidence of a peak in COVID-19 new cases globally," says Derek Halpenny, head of research, global markets EMEA and international securities at MUFG.

Risk aversion that stokes a stronger Dollar and imposes greater losses on GBP/USD than EUR/USD would always produce a falling Pound-to-Euro rate, as was seen during the first few weeks of March. However, Sterling's relatively higher 'beta' than the Euro is a double-edged sword that can work in its favour when robust risk appetite produces broad weakness in the Dollar and other safe-havens like the Yen, Swiss Franc and often, the Euro.

This can result in a GBP/USD rate that rises faster than EUR/USD, taking the Pound-to-Euro rate up with it. The rub for Sterling, however, is that there's a great deal of uncertainty about the short-term trajectory of the Dollar. Some say it's already fallen about as far as it's likely to for the time being, suggesting a reversion to the downside could be likely for GBP/USD and EUR/USD over the coming days, which might mean fresh losses for the Pound-to-Euro rate.

"Our best guess is that the historic rally is not quite over. In a further equity market drawdown the real trade-weighted Dollar has perhaps 3-5% upside from the latest highs, in our view," says Zach Pandl, global co-head of foreign exchange at Goldman Sachs. "In more orderly market conditions we would expect more correlation between returns and macro fundamentals, which we think should favor positions in: short USD/JPY, long NOK/SEK, short EUR/GBP, and perhaps long AUD/CAD." 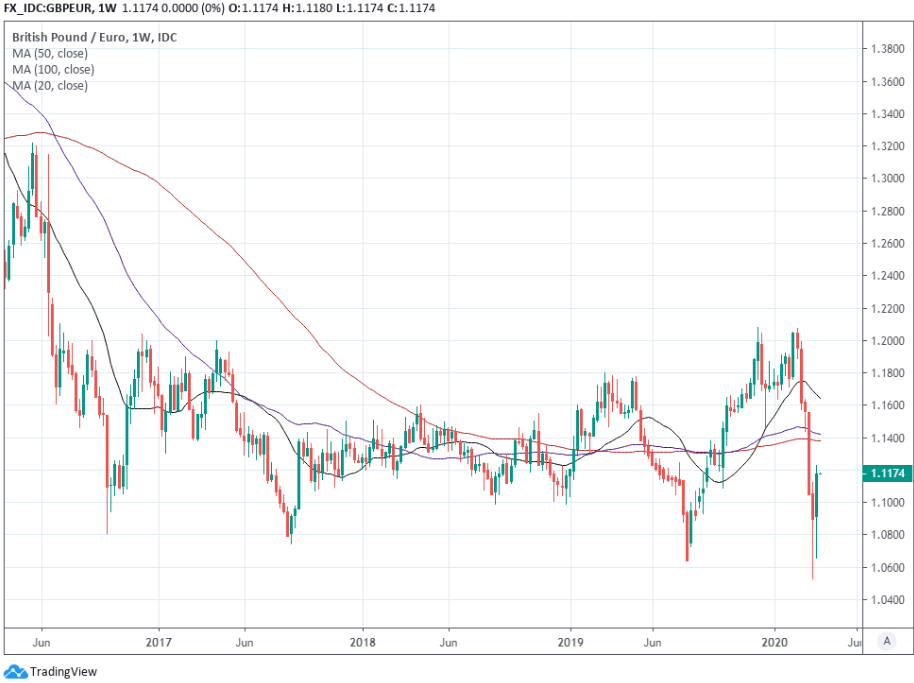 Above: Pound-to-Euro rate shown at weekly als, alongside 20-week 50-week and 100-week moving-averages.

Sensitivity to changes in risk appetite and a vulnerability to a strong Dollar mean the market mood will be an important factor for Sterling this week. The Dollar Index fell more than 4% last week and stock markets recovered double-digit percentages previously lost in the most fierce sell-off since the financial crisis, while the GBP/USD and EUR/USD rates rose by 7.5% and 4.2% respectively.

Risk appetite is likely to be driven by changes in the pace at which the coronavirus spreads throughout the major hotspots in the world, notably the U.S. and Europe including the UK, with investors also likely on the lookout for any hints about how long 'lockdowns' are likely to keep economies on life support for. The U.S. pulled ahead of Italy and China on Friday, claiming the mantle of the largest coronavirus outbreak after confirmed infections crossed the 100k threshold before rising to 122k on Saturday.

"Most western Europe countries, except Belgium and France, saw slightly smaller increases in cases yesterday, but the rate of decline is agonizingly slow," says Ian Shepherdson, chief economist at Pantheon Macroeconomics. "Italy yesterday reported a 6.9% increase in cases, the best day since the crisis began, lifting the doubling rate to 10.4 days. Further progress is likely over the next week, given the paths seen in China and Korea."

Both the U.S. and UK saw their largest single day increases in infections and deaths Friday while Saturday's disclosures brought only a slightly lesser pace of increase. Meanwhile, new cases recorded each day in Italy, the epicentre of the European outbreak, appeared to slow last week. Likewise in Spain, although momentum remained on the side of the virus in France and Germany.

These kinds of figures could mean there is now a risk for Sterling and the U.S. Dollar of Europe's epidemic being brought under control at a time when outbreaks in both the former countries are still gathering pace, which would have significant implications for the relative pace of economic recoveries. That would be relevant for the Pound and Dollar because exchange rates follow fluctuations in expectations for relative rates of economic growth closely.