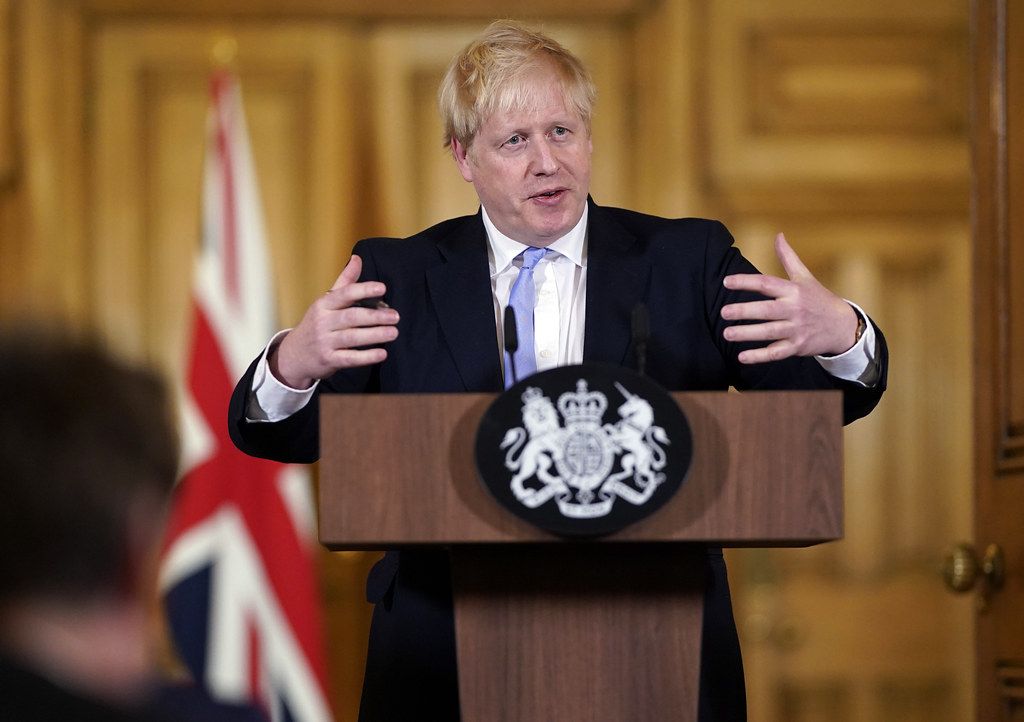 The Pound-to-Euro exchange rate remains locked towards the bottom of a seven day range amidst a climate of investor anxiety over a coronavirus-linked global economic slowdown and we are told that further losses for the exchange rate are possible, should the current conditions persist.

The UK Prime Minister Boris Johnson briefed the nation on Monday saying that the coronavirus outbreak in the country could prompt authorities to initiate a 'delay phase' response, which could include telling people to self-isolate even if they display mild symptoms, such as a cough.

The closure of schools and banning of large public events could also be initiated, but for now health authorities are monitoring the spread of the virus, believing the 'containment phase' is still adequate.

Regardless, the impact on the public psyche will be substantial and there is evidence that the consumer is becoming increasingly cautious which should lead to lower spending and investment by both business and individuals, sparking a notable slowdown in economic growth in the UK.

But, make no mistake, this is a global phenomenon and will be felt in countries right across the world. Overnight it was announced that travel bans in Italy would now apply to the entire country, not just the outbreak's epicentre in Lombardy.

Experts warn that an Italian-style lockdown could be a matter of weeks away for other European countries, including the UK.

Predictions by a leading independent research house for a worldwide recession and a deep sell-off in global stock markets of up to 25% suggest the conditions for the British Pound to fall further against the Euro will remain in place for some time yet.

"Global spread of the Covid-19 virus looks likely to cause a worldwide recession and bear market in stocks. Nobody knows how serious the disease is likely to be," says Charles Dumas, Chief Economist at TS Lombard.

The Pound-to-Euro exchange rate has fallen sharply amidst a global stock market sell-off that started in late February, which has seen global investors liquidate holding of stocks and repatriate capital into euros.

The Euro has over recent years become a favoured currency to fund stock market investments as Eurozone interest rates remain at record lows; we are now witnessing a substantial return of borrowed capital into the Eurozone.

"A more than 1% rally Monday launched the euro to 13-month highs against its U.S. rival. EUR/USD is flying higher and higher as global tumult hastens a reversal in euro-funded carry trade bets," says Joe Manimbo, a foreign exchange analyst at Western Union.

Therefore, how the Euro exchange rate complex performs going forward remains highly dependent on how long this market meltdown can last for.

"One thing is for certain – this market selloff isn’t done yet. We have seen several impressive rallies for equities, but, like late 2018, the path seems lower. Too many people will have been scared out of their risk-taking posture by the recent moves, and the intraday rebound merely provides an opportunity to cut back on risk at a better price," says Chris Beauchamp, Chief Market Analyst at IG.

TS Lombard's base-case scenario for a global recession and bear market would almost certainly create the conditions for further gains in the Euro.

UK health authorities meanwhile said last week a worst-case scenario in the UK could see pandemic infect 60% of the population while in the U.S. the Brookings Institution have released research that suggests a reasonable likelihood that 10% of the U.S. population will catch the neo coronavirus and at least 1% will die.

"As that implies more than 300,000 US deaths, personal fear is rational – there is more to fear than ‘fear itself’," says Dumas.

Dumas says discretionary consumer spending is typically one third of GDP in developed markets, assuming it is cut 5% in the second quarter then second quarter GDP will fall 1.7%, or an annual rate of 6½-7% in the U.S. mode of presenting accounts.

"It could be more, it could be less – nobody knows, and there are no precedents," adds Dumas.

If such a decline to economic growth were to be realised, the decline in the second quarter of 2020 "would certainly spill over into Q3," says Dumas, "reinforced by falling business capex and hobbling the nascent housing recovery."

Two consecutive quarters of negative GDP would fulfil the standard definition of a recession.

The response to contain the disease outbreak by governments will meanwhile have a severe impact on economic activity which in turns dislocates the global supply chain which has become increasingly interconnected after years of relentless globalisation.

"As quarantines shut down individual factories and travel restrictions curb the flow of people and goods, the economic disruption will spread, virus-like, through global supply chains," says Geoffrey Gertz, Fellow - Global Economy and Development at The Brookings Institution.

While the worst of the impact on the Chinese economy appears to be fading - Chinese production is picking up again and migrants workers are returning to work - the impact on developed markets is now starting to be felt.

With regards to the stock market's outlook, a global recession would naturally feed into weaker stock prices.

"For stocks, we forecast the combination of negligible earnings growth this year with cuts in forward p/e ratios could take the S&P 500 down to the 2500 level, more than 25% down from its February 19th peak," says Dumas.

Global stocks fell yet further on Monday and prices for crude oil tumbled as much as 33% after Saudi Arabia launched a price war with Russia, sending investors already worried by the coronavirus fleeing for the safety of bonds and the Yen.

Demand soared for safe-haven bonds, driving the 30-year U.S. bond yields beneath 1% and raised bets that the Federal Reserve will be forced to cut interest rates by at least 75 basis points at its March 18 meeting.

Similar demand in the UK meant gilt yields fell below the 1.0% level for the first time on record.

The number of people infected with the coronavirus rose above 110K, while 3,8K have died from the virus, however it is a widespread fear of the outbreak that will ultimately prove more damaging for the economy as investors retrench spending plans and withdraw into their homes.

Falling oil prices have meanwhile lead to increased expectations that U.S. oil producers that had issued a lot of debt would be made uneconomic by the price drop, an outcome that could stoke a U.S. recession.

"Everything points to a severe slump in Q2 consumer spending," says Dumas, adding:

"No forecast is ‘high conviction’, but a 5% cut in US discretionary consumer spending, for example, would be 1.7% of GDP. Yet the trend growth-rate of US GDP is only ½% a quarter (2% annualised). So that scale of switch to consumer restraint would drop real Q2 GDP by 1¼%, an 6½-7% annual rate in the U.S. mode of presentation."

Dumas says this is clearly a drastic scenario, but stock market analysts can easily see impact it would have on the received wisdom that S&P earnings will grow 10-15% in 2020. "A market crash would reinforce consumer caution – a 'positive feedback' loop that is extremely negative in its implications."

A rally in global stock markets has aided a recovery back above 1.15 in the GBP/EUR exchange rate.

The Euro's relationship with investor sentiment remains intact with the single currency rising in times of market stress, and falling when markets are gaining.

European stock markets were trading higher on Tuesday, falling the precipitous drops witnessed the day before and the Euro is down by about 0.30% against the Dollar and Pound in response.

"Following sharp falls again yesterday, global equity markets stabilised overnight in Asia. In Japan, the TOPIX index was up around 1.5% on reports that they government was due to announce a second round of countermeasures to the covid-19 virus. Similarly, US President Trump is reportedly readying a payroll tax cut for workers and other relief measures for corporates affected by the outbreak," says Nikesh Sawjani, an economist at Lloyds Bank.

Markets have thus far failed to react in a positive fashion to the actions of world central banks to try and stabilise markets as investors panic over the economic costs of the coronavirus; indeed, the coronavirus represents a 'supply side' problem to the economy that central bank tools are not equipped to deal with.

Yes, if there are stresses in the financial system stemming from the fall in stocks and loss of investor confidence, central banks can provide necessary remedies.

However, the most effective route to stabilising markets and confidence is via government spending.

U.S. President Donald Trump said that after meeting Republican lawmakers on Tuesday, he would unveil a "very dramatic" package of measures aimed at helping the hardest hit parts of the economy.

"I will be having a press conference to talk about various things that we’re doing economically, they’ll be very major," said Trump.

The UK government will meanwhile present its budget on Wednesday and expectations are that Chancellor Rishi Sunak will announce a series of measures aimed at assisting workers, businesses and other public entities to fight any negative effects of the coronavirus.

Strong responses from governments would potentially inject the confidence required to stabilise markets in the near-term.

"It is uncertain when economic activity will resume in Europe. Monetary policy support is needed to mitigate the credit crunch risk, while fiscal push is required to support the shock on the supply side," says Pascal Blanqué, Group Chief Investment Officer at Amundi Asset Management.

"We could see a further leg down from the current level, if we were to move towards a global recession. But we believe that at the moment, this remains a tail risk. We expect more central bank interventions, after last week’s Fed cut, and more fiscal policy, on top on what has already been announced in various countries," says Blanqué.

We would imagine the GBP/EUR exchange rate would benefit from any newfound financial market stability.

However, the peak of the virus is still yet to reach the UK, U.S. and other European nations and therefore the economic consequences of the outbreak remain unknown.

Markets hate uncertainty, and there is plenty of uncertainty ahead over coming weeks.