- As Q4 growth data looms for both UK and Germany.

Sterling was the worst performing major currency last week amid confrontational rhetoric that's revived the market’s ‘no deal’ Brexit concerns at a point when prior gains had left the British currency vulnerable to a correction.

That correction could either be egged on or called to a halt this week by final quarter UK growth figures, depending on the outcome, although U.S. inflation and retail sales figures will also be important. So too will the market response to the latest coronavirus headlines, especially as the death toll surpassed that of 'SARS' over the weekend, with the deadly disease continuing to spread within the world's second largest economy.

This is partly because Sterling is arguably exposed to greater downside risks against the greenback than its continental counterpart, which matters for the Pound-to-Euro rate, but also because Sterling has failed three times this year to overcome the 1.1933 level and with each of those failures the technical risks to the exchange rate have tilted more in favour of a correction lower. 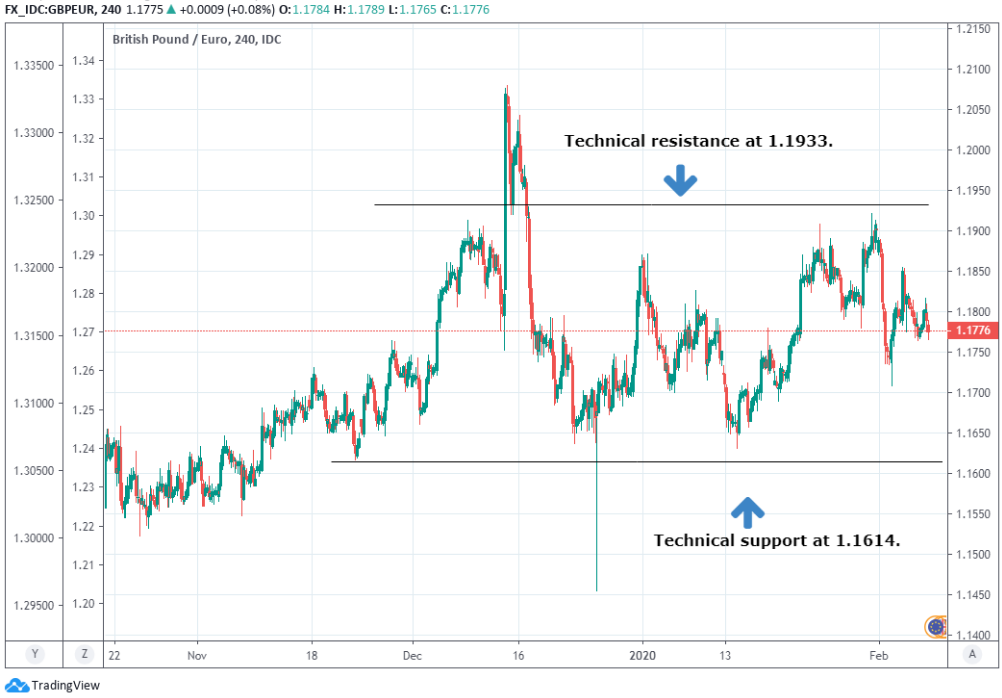 “EUR/GBP has recently eroded the 6 month downtrend, but the break has not been sustained and we may see some further consolidation near term,” says Karen Jones, head of technical analysis for currencies, commodities and bonds at Commerzbank. “The market might be basing from a longer term perspective.”

Jones flagged on Friday, Sterling’s triple rejection from the 1.1933 level as a bearish sign and told clients the 1.1614 threshold is now in play.

The 1.1614 level is the lower end of a resistance pocket that barred the path higher for Sterling on several occasions in late 2019 however, and in keeping with technical convention, that level converted from resistance to support once it was overcome in response to Prime Minister Boris Johnson’s October declaration that he’d agreed exit terms the EU.

It’s now in focus following the three failures to overcome 1.1933 and if it gives way at any point, a further unwinding of the Pound’s recent gains could then ensue, possibly taking it back to 1.14 against the Euro.

Jones is betting that’s exactly what happens in the coming weeks although she’s told clients to “take profits” on any wagers against the Pound at this level, indicating that further losses beyond it could be unlikely. 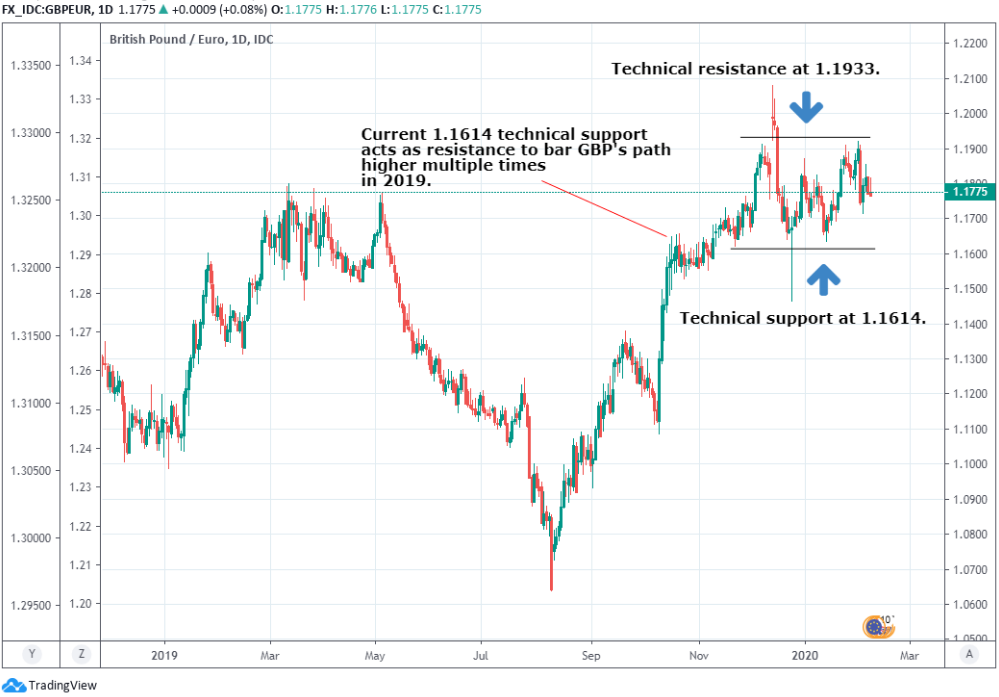 The Pound-to-Euro rate always closely matches the sum of GBP/USD over EUR/USD so can be characterised as a bit of a race between Sterling and the Euro, against the Dollar.

The winner of that race against the Dollar will normally appreciate against the other and vice versa, although both GBP/USD and EUR/USD have recently broken below key support levels that had kept them underpinned for months.

Range-breaks in the GBP/USD and EUR/USD rates create uncertainty about the outlook for the Pound-to-Euro rate although Sterling arguably has greater downside against the Dollar given that as recently as September 2019 it traded some 7.6% below Friday’s market price.

The Euro on the other hand, is less than 1% away from a near-three year low and is nearing levels that have rarely been seen since the turn of the millenium. Furthermore, the Euro can itself benefit from risk-aversion among investors due to its 'funding currency' status.

Sterling was the worst performer last week and now faces downside risks against the Euro and Dollar from both the charts and the fundamental side, which will be back in focus with this week's release of final quarter GDP data.

Tuesday at 09:30 marks the release of December GDP figures that are themselves the final piece of a so-far dire fourth quarter puzzle.

Consensus looks for a 0.2% December increase to leave GDP unchanged for the final quarter, which would mark not only a limp rebound from the prior contraction but also a weak finish to a terrible year.

The economy grew 0.1% in October before contracting a sharp 0.3% in November as retail sales shrank even in spite of the Black Friday promotions that are normally a consumer frenzy, while the Brexit-transfixed manufacturing sector offered little support.

"The balance between improving domestic activity and potential hardening negotiations should keep GBP/USD in an effective 1.28-1.32 range," says Tim Riddell, a London-based strategist at Westpac.

November’s data showed the economy growing just 0.6% for the year to the end of that month and Tuesday’s figures could confirm an almost-as-dire picture even if growth does rebound by the 0.2% anticipated.

Such a picture would be problematic for the Pound because it would leave the economy growing beneath its estimated 1% inflation-producing rate of growth at a time when the consumer price index of 1.3% is far below the 2% target.

These growth and price dynamics argue for a Bank of England (BoE) interest rate cut and only some offsetting stimulus, possibly from the March 11 budget, could undermine the case for policy support in the short-term.

"Next week’s GDP data will be important for the MPC. If our estimates are correct, a negative Q4 print won’t just be symbolic (i.e. another contraction) - it will have ramifications for the MPC’s forecasts, which are predicated on a flat reading next week," says Sanjay Raja, an economist at Deutsche Bank. "Positive payback in services and manufacturing activity should support monthly output. Colder weather and heavy precipitation should also see energy and water activity rise. We do, however, anticipate a drop in construction output."

The BoE itself eschewed a rate cut last month because in the aftermath of December’s election it saw scope for an economic recovery in the months ahead, with the decision leading investors to price-out from the market the prospect of a rate cut coming before September. However, a worse than expected growth performance for the final quarter could lead some investors to question that assumption, with implications for Sterling.

U.S. economic data including January retail sales and inflation figures will also be important not only for the Dollar this week but for all other exchange rates because, with the U.S. economy again demonstrating its exceptionalist credentials while the UK and Eurozone economies struggle, the Dollar’s existing interest rate advantage over most of its rivals is becoming further entrenched.

The Euro ceded ground to many rivals last week and in doing so provided company to Sterling as one of the worst performing major currencies, which is a trend that might be set to continue over the coming days.

Europe’s single currency was one of many to fall victim to a stronger Dollar although the Eurozone was also a source of woe for the continent’s unified unit as German data ate away at the short-term prospect of an economy recovery.

Friday at 07:00 marks the release of the initial estimate of German GDP growth for the final quarter while 10:00 of the same morning will see the unveiling of Eurostat’s second guess at Eurozone GDP growth, which was preliminarily estimated to be 0.1% last month.

Consensus is looking for German growth of 0.1% to be followed by a reiteration of the 0.1% already projected for the Eurozone, although after last week’s numbers the risks could be to the downside.

“The 3.5% plunge in IP in Germany and the 2.8% plunge in France were far weaker than expected and raises the likelihood of a contraction in euro-zone real GDP in Q4 when the data is released next Friday. This of course is a picture of the economy ahead of the coronavirus impact that will undoubtedly hit activity in Q1,” says Lee Hardman, a currency analyst at MUFG.

French and Italian GDP growth was already negative in the final quarter and if Germany went the same way it would then mean three of the continent’s largest economies shrank in the last three months of 2019.

That outcome would be unfortunate for the Euro, which broke to the downside from a four-month trading range last week, not least of all because the U.S. economy is still standing tall in the face of slowing growth everywhere else.

“This notable turn in IP data across key countries in the euro-zone (Spain & Netherlands data were also very weak) comes in the same week as ECB President Lagarde stated that the scope for monetary easing has become very limited to deal with external shocks like coronavirus. Markets may conclude that the FX channel is now the primary tool available for countering negative growth shocks going forward,” Hardman warns.

The Euro has long been hampered by a disadvantageous interest rate differential with the U.S. and many others although the Euro-Dollar differential is becoming more entrenched with every outperformance by the U.S. economy and is again weighing heavily on the single currency.

It’s not just economic numbers that will matter to the Euro this week, however, because investor risk appetite will also be important. This means headlines about the spread of coronavirus in China and beyond are also key.

Uber low interest rates at the European Central Bank (ECB) have given the Euro ‘funding currency’ status, which sees it borrowed and then sold in order for investors to fund bets on higher yielding assets when the mood in global markets is upbeat, only for it to be bought back during times of risk aversion as the same investors seek to exit their bets on greener pastures further afield.

Those greener pastures are often emerging market currencies, which all tend to do badly when the global growth outlook is called into question in the way that it could still be if either Eurozone data remains dire or if the coronavirus newsflow deteriorates again. The outbreak in China is far from over and the risk of outbreaks in other countries is anything but negligible, while the ongoing economic standstill in China was already expected to deal a severe blow to global growth in at least the first quarter.

China’s National Health Commission declared a total of 811 deaths at the weekend, taking the tally above the 774 who died from the Severe-Acute-Respiratory-Syndrome (SARS) in 2002-2003. There are now 37,198 confirmed cases of the disease in China, up from 14,380 at midnight on February 01.