However those watching the GBP/EUR exchange rate should be aware that Sterling's upside momentum is starting to fade, and while still relatively well supported, the prospect of levels around 1.1850 being reached again in the near-future are becoming increasingly remote.

A clear sign of waning momentum, in either direction, is best exhibited by the Relative Strength Indicator (RSI) on the daily charts, which is the line in the bottom panel in the below: 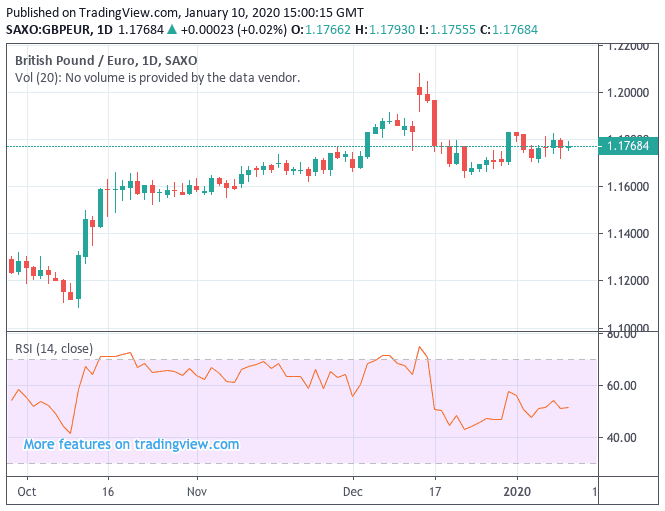 The RSI tells us how an exchange rate is trending and a reading around 50 tends to reflect a neutral trend. The RSI on the daily chart is now at a flat 51.5.

Pound Sterling nevertheless remains well supported and has still advanced against the majority of its peers over the past five days, with the gains being propped up on Friday by ongoing signs the economy has received a boost following the December election. 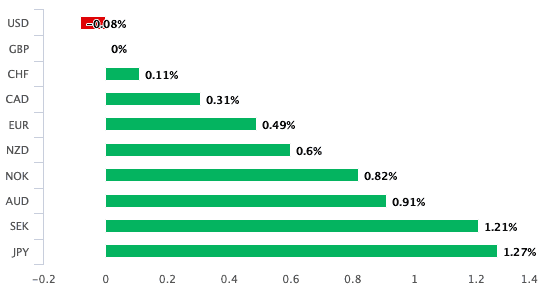 Above: Sterling's performance this week

Deloitte report "an unprecedented rise in business sentiment" in then fourth quarter of 2019, a survey that took place in the wake of the General Election.

Between 13th December and 6th January, "confidence has seen the largest increase in the 11-year history of the survey taking it to its highest ever level," says Deloitte. 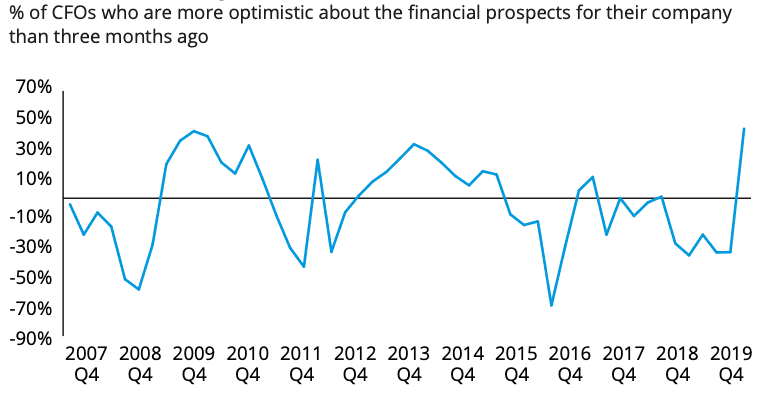 The findings add to growing evidence that the UK could see a jump in economic activity in 2020 as businesses unlock investment held back prior to the December 2019 election that gave a result that put to bed years of political and Brexit uncertainty.

Deloitte also report that the reduced political uncertainty has prompted a strong rebound in CFO expectations for business investment. This should allow for a notable uptick in UK economic activity in early 2020, following the months of lacklustre growth that characterised 2019.

"There is some early evidence that a 'Boris bounce' after the election victory might be in progress, but the size and duration of any upswing will depend on how well the next stage of the Brexit negotiations go," says Thomas Pugh, an Economist in Capital Economics.

Pugh cites December’s final IHS Markit/CIPS services PMI which was revised up by a full point compared to the first PMI. The final PMI contained responses from businesses in the UK's dominant services sector from after the election, which explains the big jump.

"Given that the flash PMI contains about 85% of responses, the later replies to the survey must have been pretty positive!" says Pugh.

The Pound-Euro exchange rate fell sharply on Thursday, January 09 after the Bank of England's Governor Mark Carney said there remained a chance the Bank could cut interest rates in the near-future, owing to their lack of confidence that the economy was generating adequate growth levels. Carney said in a speech that the Bank stood ready to deliver a "prompt" response to weakness eyed in the UK economy over recent months; a signal to markets that an imminent interest rate cut could be at hand.

However, Sterling has ultimately recovered much of the losses as markets are not convinced the Bank will follow through with a rate cut until they have some solid data confirming the economy contiues to struggle despite the outcome of the election.

They would unlikely cut interest rates if there is a post election bounce, therefore it will take some disappointing data for foreign exchange markets to start buying the Bank's warning, and therefore Sterling will ultimately remain supported until such a time as data does deteriorate.

"The next two weeks of data will likely determine whether the Bank of England turns dovish or not. Make no doubt about it, UK growth data are woeful, below trend and on several measures still falling. But the good news is that new orders are showing signs of rebounding and with it the global economy too," says Jordan Rochester, FX strategist with Nomura.

Nomura is forecasting "GBP to grind higher" in 2020, as "bad news is in the price" and they see "greenshoots in the data".

On the Brexit front, Nomura says "Brexit to be more of a concern not now, but in H2."

"Brexit risks will remain, but are unlikely to be direct market drivers until it becomes clearer on progress (or a lack of it) in talks with the EU," says Rochester.