- But Thursday's election will dominate GBP in the days ahead.

- Friday's election results to set the direction for GBP into year-end.

The Pound has clocked up a hat-trick of new 2019 highs against the Euro in recent days and now enjoys a bullish set-up on the charts that could easily portend further gains if not for the looming Thursday general election, which will almost certain to dominate British exchange rates in the week ahead.

Pound Sterling had previously seen its advances on the Euro capped by the 1.1813 level, which barred the path higher back in March and May earlier this year, although that ceiling gave way on Wednesday and created scope for the UK currency to build on earlier gains.

A solidifying Conservative Party polling lead and initial advance across prior resistance levels were instrumental in providing sufficient fuel for the British unit to achieve such a strong finish to week. Technical analysts at Commerzbank warned clients early on Friday that the Euro-to-Pound exchange rate could face more losses in the coming days, which is positive for the inverse Pound-to-Euro rate.

"The market has continued to sell off following the break below the .8465 2019 low. TD support at .8440 has also been eroded and for now we will assume scope to .8314/04 the April 2017 low and potentially the .8168 50% retracement. Some caution is warranted the daily RSI has not confirmed the new low, however this has previously been ignored," says Karen Jones, head of technical analysis at Commerzbank. 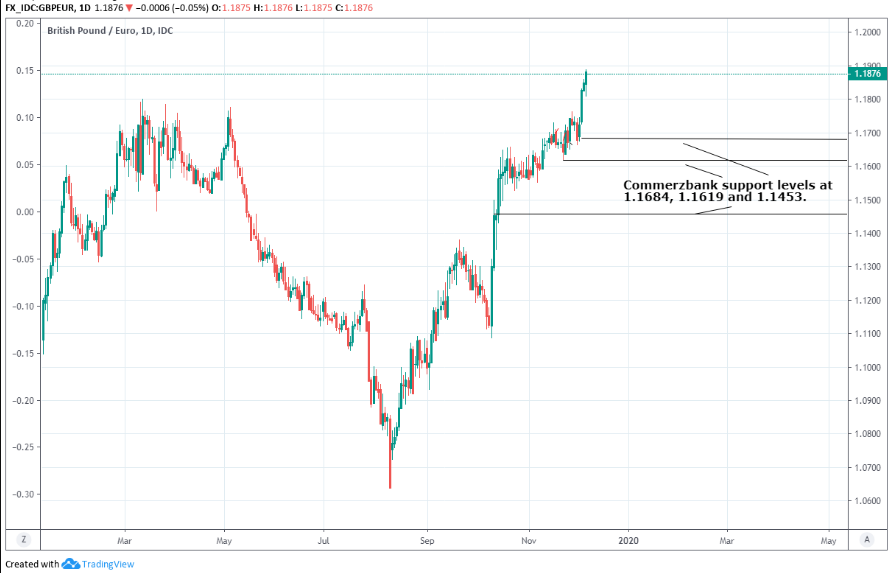 Jones, who led Commerzbank's technical analysis team to 1st place in the Euromoney FX survey this year and a top-five in each of the last five years, is assuming the current technical set-up will be enough to carry the Pound-to-Euro rate up to 1.2027 over the coming days and weeks.

However, she's not ruled out the prospect of the Pound seeing even higher levels than that. An extend jolly higher toward the 1.2242 level could also turn out to be a credible prospect, which would coincide with the 0.8168 level of the EUR/GBP rate and the 50% retracement of a long-term downtrend in Sterling. However, that latter level is currently viewed as just a distant possibility.

Jones' work is confined to studies of trends and momentum on the charts rather than polls and Westminster politics. But her views and the signals coming off the charts do not neccesarily conflict with those of fundamental analysts who're taking their cues from the politics of the Pound, although much about the outlook will be determined by the outcome of Thursday's election. 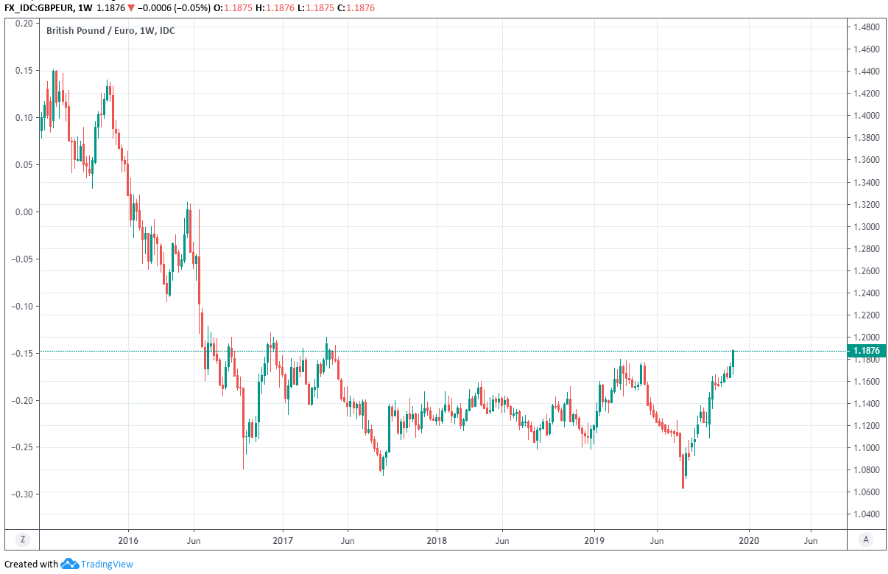 The Pound has made strong gains over the Euro and Dollar in recent days, helping make it the second best performing major currency of the last week and providing Sterling with a bullish set-up on the charts although the Thursday general election will doubtlessly dominate the week ahead.

Opinion polls have shown the Conservative Party lead stabilising at around 10% this last week, which is enough to assure a small parliamentary majority according to some pollsters. And on that score, the implied odds of a Conservative majority rose to 72% on the Betfair Exchange last week, the highest level recorded on the exchange since the election campaign began.

However, and with just days to go before the ballot takes place, bitter memories of how former Prime Minister Theresa May converted a strong double-digit polling lead at the beginning of the 2017 campaign into a hung parliament barely more than two years ago could constrain investor appetites for Sterling in the days ahead. Meanwhile, uncertainty over the likely outcome of the vote may also prompt some profit-taking in Pound Sterling trades.

The bottom line is that despite investors, analysts and pundits being happy to wager on a victory for Prime Minister Boris Johnson this week, the Pound may be vulnerable to a downward correction over the coming days as speculative bids for the British currency evapourate and as some investors take profits off the table ahead of the vote.

There is only one meaningful piece of UK economic data due for release this week and that's the initial estimate of October GDP growth that is due out at 09:30 Tuesday. Consensus is looking for a 0.1% increase to reverse and equivalent contraction that was seen in September, the final month of the third quarter in which the economy expanded 0.3%, according to the initial estimate of the Office for National Statistics.

A Johnson victory might see the UK move forward on Brexit and would certainly bar an increasingly radical opposition Labour Party from 10 Downing Street for up to five more years. Currency markets favour a Conservative government.

A part of the market bias comes from a desire among investors to negate the threat of a 'no deal' Brexit and also see the economy move on from the current stage of negotiations, which has paralysed the Bank of England and some businesses, while the rest is centred on fears about the opposition's economic agenda.

The election comes amid fresh signs of weakness in the UK economy as well as at a tense time in the U.S.-China trade talks, which have shrouded the entire global economy in a cloak of uncertainty.  This is after IHS Markit PMIs suggested last week the economy contracted in November and that it might face a decline for the fourth quarter. That would be the second contraction this year.

The Euro closed last week on the back foot after a blowout U.S. non-farm payrolls report and details of a larger-than-expected fall in German production hit the wires Friday and served the market a reminder of the Transatlantic divergence in economic fortunes, which is a theme that may endure over coming days.

Germany's ZEW index of economic sentiment will be released on Tuesday at 10:00 just days before the inaugural interest rate decision and monetary policy statement of European Central Bank (ECB) President Christine Lagarde at 12:45 on Thursday.

The ZEW survey will provide insight into changes in analyst views of the German and Eurozone economies during the last month while Thursday's ECB meeting could well underline in the eyes of the market the prospect of Eurozone interest rates remaining at negative and deeply unattractive levels for quite some time to come as the bank seeks to stimulate more economic activity and higher inflation with lower borrowing costs.

That's neither a recipe for gains in the Euro nor one for losses. If anything the emptiness of the economic calendar and prospect of an ECB interest rate statement that simply reiterates Lagarde's already-expressed intention to carry out a strategic review of the bank's monetary policy before taking any action as head of the bank, could simply further entrench expectations of lesser volatility more range-bound trading for the single currency.

The ZEW survey and ECB statement come after Germany's industrial sector was revealed to have struggled again early in the final quarter, with industrial production falling an annualised 1.7% in October according to Destatis figures released Friday. That deepened a 0.6% contraction from September and came as markets were looking for a 0.1% increase in output.

"We don’t want to sugar coat these data, but the chart shows that the trend in production growth isn’t getting worse, a message supported by the stabilising trend in new orders, albeit at a very depressed pace. We reckon Q4 will be another write-off for manufacturing before a gradual upturn in H1 next year," says Claus Vistesen, chief Eurozone economist at Pantheon Macroeconomics.

With the European calendar quiet and devoid of any market-moving items on the agenda, the Pound-to-Euro and Euro-to-Dollar rates will be driven largely by events in London and the U.S. over the coming days.