- GBP correction to continue in days ahead says Commerzbank.

- But GBP return to March 2019 high still possible further out.

- Analysts reluctant to recommend buying GBP ahead of election.

The Pound-to-Euro rate was clobbered in the final session of last week after IHS Markit PMI figures pointed to another economic contraction in the final quarter, although technical analysts at Commerzbank say the nascent correction lower could continue in the days ahead.

After a strong start Monday the Pound spent much of last week in retreat from the Euro, although technical indicators on the charts are suggesting the EUR/GBP rate could move higher in the coming days, which means the Pound-to-Euro rate could extend the staggered decline embarked upon last week.

"EUR/GBP has another 13 count on the daily chart PLUS divergence of the daily RSI and I think this will bounce near term. Rallies will find a minor downtrend at .8635," says Karen Jones, head of technical analysis at Commerzbank. "Beyond this there is scope for the slide to extend to the .8465 2019 low. We note the TD support at .8485 and we look for the market to hold here."

Jones says the Pound-to-Euro rate will find support around 1.1580 and that if this level holds the exchange rate will likely return to the 1.1841 March 2019 high in the weeks ahead, but that this will mark at least a temporary end to the uptrend in the exchange rate. 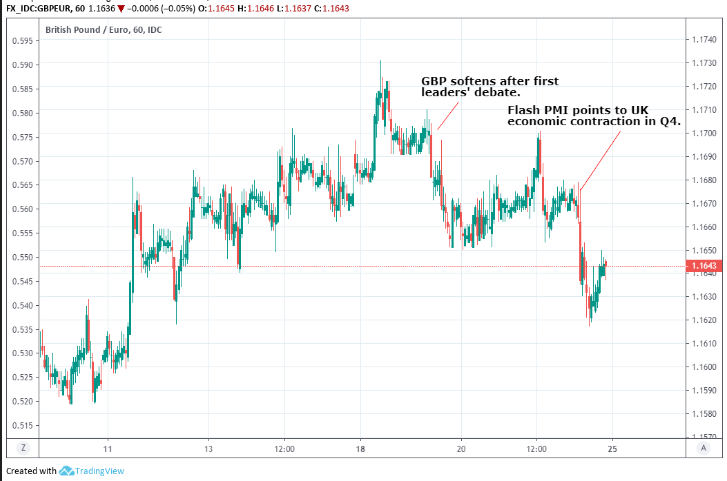 There are more than just technical reasons for thinking the British currency might find itself on the defensive early in the new week because Sterling opinion polls are now suggesting that the Conservative Party lead over the radical opposition Labour Party is narrowing.

Polls published in The Sunday Times and Sunday Express had the Tory lead retreating this weekend, with results collected after the televised leaders' debates but before manifestos of the main parties were published. The Conservatives frequently command between 42% and 45% in the opinion polls, while the opposition Labour Party has struggled to get above 30%.

Meanwhile, a poll-of-polls featured in The Telegraph had the Conservatives on course for a 64 seat parliamentary majority, although others have suggested a lesser majority than that. That same poll reported by The Telegraph predicts a 55 seat loss for the opposition. The Tories have enjoyed a strong lead over Labour since the December 12 election was announced but bitter memories of Theresa May's lead heading into the 2017 ballot, which proved to be erroneous, are containing enthusiasm for Sterling.

"It’s worth noting that it was only after the manifesto launched in 2017 that polling started to truly tighten up," says Jordan Rochester, a strategist at Nomura. "I would not recommend a fresh GBP long position here as it may only take a few polls showing a Labour party bounce or indeed another gaffe moment in UK politics from the Conservatives to put the market’s current base case in doubt and with it cause GBP’s recent grind higher to come undone." 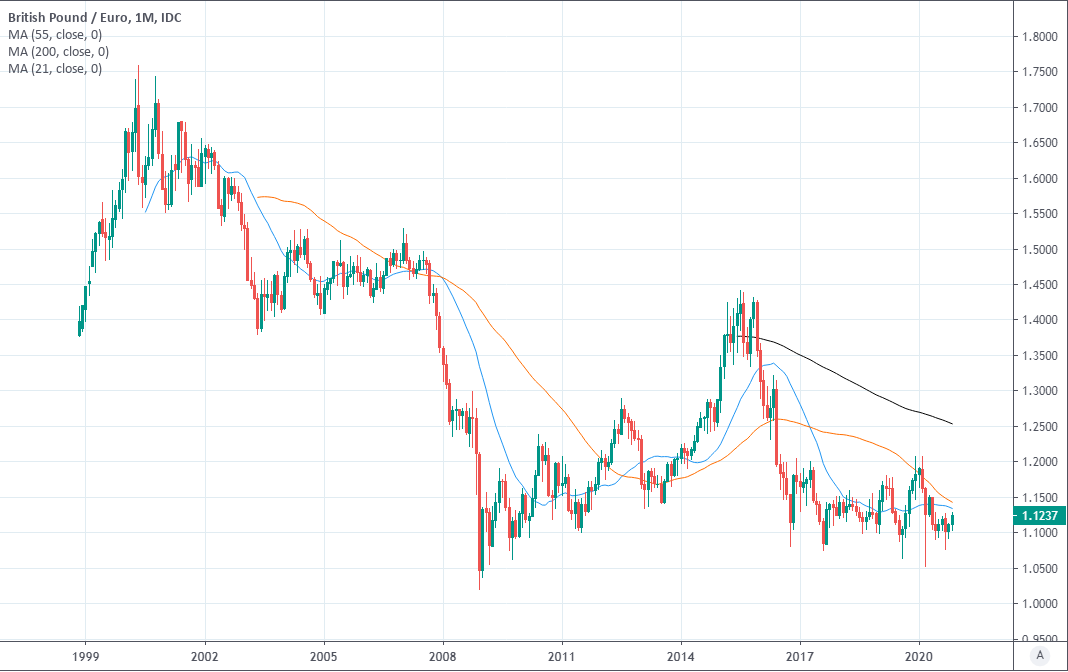 A Conservative majority would likely mean the agreement struck by Boris Johnson in October becomes law, taking the UK out of the EU but locking it into 'transition period' during which the future relationship is negotiated. Crucially for markets, it would negate the threat of a 'no deal' Brexit, while electoral victory would spare the economy and Pound from years more of indecision and delay, if not worse, under an anti-Brexit opposition government.

There are no major economic numbers due for release in the week ahead, although the an IHS Markit PMI survey pointed last week toward another contraction for the economy in the final quarter, which weighed heavily on the Pound during the Friday session.

"Next week’s calendar will lack market-moving data releases, which will leave GBP being solely driven by the expectations around the elections," says Chris Turner, head of FX strategy at ING. "For now, with expectations firmly around a Conservative win, sterling is likely to remain rangebound."

Europe's single currency may be indicated higher by the charts but economic data and developments in the U.S.-China trade talks will be just as important as anything else in determining the Euro's trajectory in the days ahead.

The Leibniz Institute for Economic Research (Ifo) Business Climate survey is out at 09:00 Monday at 0900 and markets are looking for the index to rise from 94.6 to 94.9, which would mark a second consecutive increase for the influential barometer of German economic activity.

Last month the Ifo institute said the slump in the manufacturing industry, a key driver of the broader downturn in the economy, had come to an end and that the six-month outlook was brightening. That followed a surprise pickup in factory orders in October and a slowing in the industrial production downturn.

The Euro might receive a temporary boost Monday if November's Ifo survey retains the upbeat tone of the prior report although once published, U.S. economic numbers and the trade talks with China will dominate price action until Friday when November inflation figures will be released at 10:00.

"With growth likely to deteriorate further, and fiscal policy providing very little boost to GDP growth, we think that the onus of stimulating the economy will remain on the ECB for the foreseeable future. We forecast that the ECB will cut its deposit rate to -0.80% (-0.50% currently) and increase its asset purchases to €30bn per month (from €20bn) next year," says Simona Gambarini at Capital Economics. "We also suspect that the euro will weaken further against the dollar next year, to $1.05 (from $1.11)."

No matter the outcome, Friday's inflation data won't change the fact the ECB's interest rates are likely to "remain at present or lower levels" for an extended period of time, which could mean they struggle to have any market impact at all.

The most prominent drivers of the Euro-Dollar rate in the week ahead will likely be   President Donald Trump' decision on whether to sign the Hong Kong Human Rights and Democracy Act as well as the ebb and flow of information relating to the U.S.-China trade talks. After all, Europe's economy has arguably suffered more from the trade war than either of its two protagonists.

The Hong Kong bill threatens to remove Hong Kong's special trade status as well as to impose sanctions on some Chinese officials if the city's independence is undermined, and could become law regardless of whether Trump signs it. Passing it already drew a rebuke from China and threats of unspecified retaliation if the bill makes it onto the statute book, so signing it could have consequences for the trade talks - and for the Euro.