- Odds of a Conservative victory rise to ~60%

The British Pound has advanced on the Euro, Dollar and other major currencies over the course of the past 24 hours after the odds of a Conservative Party majority being secured at the December election were raised following the decision by the Brexit Party to not contest existing Conservative seats.

"This will likely help to build support for the Conservatives ahead of the December election as they won’t need to fight off challenges from hard Brexit supporting candidates. Farage will instead target anti-Brexit parties such as the Liberal Democrats and Labour in certain constituencies. Sterling spiked on the news that a Conservative government looks assured as the outcome of December’s vote," says Edward Bell, an analyst with Emirates NBD.

However, the decision by the Brexit Party to stand in key Conservative-Labour marginal seats means the Conservative's chances of securing an outright majority remains a difficult task, and this situation could well ensure any attempts by Sterling to make meaningful gains are ultimately capped.

Brexit Party leader Nigel Farage said the Brexit Party would not contest the 317 seats the Conservatives won at the last election, however they will still target Labour and Liberal Democrat seats across the country, the very same seats the Conservatives require to secure a majority. "We are the party that absolutely believes in this," Farage said. "If you want Brexit you can’t vote Labour anyway. Put us in there and we will hold the government to account. We’re trying to get a decent voice in parliament."

The Pound nevertheless rallied on the news that the Conservatives would not face Brexit Party candidates in existing seats, with markets believing that a Conservative majority would ensure a deal is passed relatively soon after a new Parliament sits, putting to an end months of uncertainty.

Any other outcome apart from a clear-cut Conservative majority would only likely complicate matters as far as Brexit is concerned, and another hung Parliament, or a Labour minority government is therefore held by markets to be on balance negative for Sterling.

The GBP/EUR exchange rate advanced to reach a best of 1.1679, its highest level since May 08. 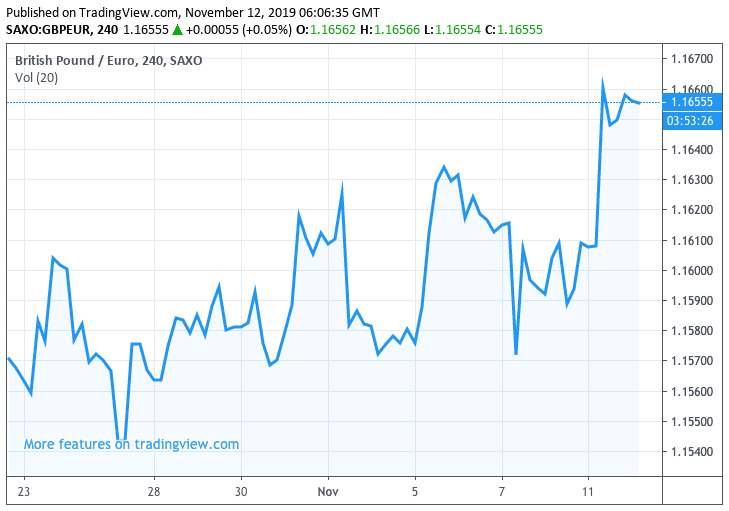 The GBP/USD exchange rate advanced to record a high of 1.2897 on the news, which puts it back in the middle of its short-term range as broad-based U.S. Dollar strength has put the exchange rate under pressure over recent days. 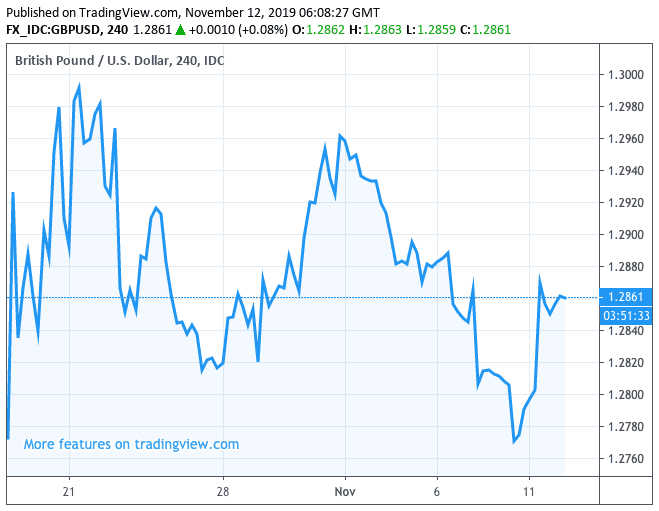 Despite the pickup in Sterling valuations, further gains will likely be tempered by the view that the Conservatives still face an uphill battle to secure an outright majority, as the Brexit Party have committed to fighting marginal seats ensuring the so-called leave vote will be split.

This will allow Labour and the Liberal Democrats to increase their Parliamentary standing.

"There could be a minority government, perhaps led by the Conservatives, that is unable to pass the WAB, or it is possible that no government at all can be formed following the December election," says Erik Nelson, Macro Strategist at investment bank Wells Fargo. "Further gridlock is a clear and present risk for the U.K. economy and financial markets."

"It would only take some gains for the Labour Party in the polls to unnerve the markets over the risk of the upcoming general election failing to resolve the Brexit gridlock by returning a parliament still unable to pass Brexit legislation – the risks associated with that don’t appear priced at present. An election result that returns a very unstable government would also undermine prospects of any considerable fiscal easing," says Derek Halpenny, an analyst at MUFG.

While the Brexit Party won't contest the 317 seats won by the Conservatives at the last election, they will still contest about 300 seats, including Labour marginals in the midlands and the north of England that Johnson will need in order to win a majority.

"Whilst it will certainly help the Tories retain the seats it currently holds, the Brexit Party will still be standing in the seats the Conservative Party hopes to gain from Labour in order to secure a majority," says Chris Curtis, Political Research Manager at YouGov. "The most important swing to look at in the polls is the one between Labour and the Conservatives. Despite a move away from two-party politics since the last election, it is still the case that most marginal seats are battles between Labour and the Conservatives, and this is the most important dynamic in deciding who will be celebrating Christmas in 10 Downing Street."

The British Pound will likely remain wedded to the rise and fall in odds of a Conservative victory, and therefore polling numbers will continue to be of interest to markets. 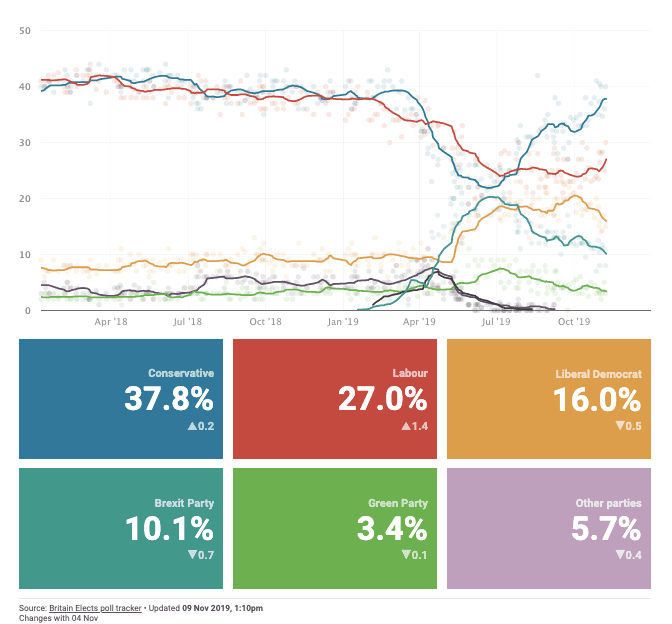 The current polling suggests a ten point lead for the Conservatives, enough to secure a majority.

This explains why the Betfair Exchange has seen the odds of a Conservative majority rise from around 40% last Friday to above 60% in the past 24 hours, despite no material shift in the polling data.

"Following Brexit Party leader Farage’s move to not stand Brexit candidates in Tory-held seats, the bookmakers’ implied probability of a Conservative government after the election has risen to a new high of 76% and the probability of a majority Conservative Government is as high as 60%. Prices imply the Brexit Party will get no seats, consistent with a further slide in their polling," says Adam Cole, foreign exchange strategist with RBC Capital Markets.

Cole adds that It is not immediately clear how the pollsters will deal with the Brexit party going forward, as many voters will not have a Brexit candidate, or how poll readings should be interpreted in the context of seat allocations.

But judging by recent moves in Sterling, "it is at least clear how GBP will respond to shifting electoral prospects and we would suggest watching the bookies’ prices as a real time guide to expectations," says Cole.