- GBP/EUR in an established downtrend, set to extend

- Momentum now oversold but not enough to signal reversal

- Pound to be impacted by Conservative leadership race

The Pound-to-Euro rate is trading at around 1.1230 at the start of the new week, about half a percent lower than the previous week’s close. Studies of the charts suggest the exchange rate is set to continue its downtrend in the days ahead.

Although the pair’s downtrend has slowed over recent days and the RSI momentum indicator is showing mild signs of convergence it remains firmly in a downtrend and this trumps all other considerations.

‘Convergence’ happens when price makes a new low but momentum doesn’t follow suit. It is a sign of waning bearish enthusiasm and can be a precursor for a rebound. Traders are advised to be cautious in pursuing the downtrend, and a continuation is only subject to confirmation from a break below 1.1225.

The 1.1125 downside target is at the level of monthly pivot a medium-strength support level which is likely to provide a floor for prices. 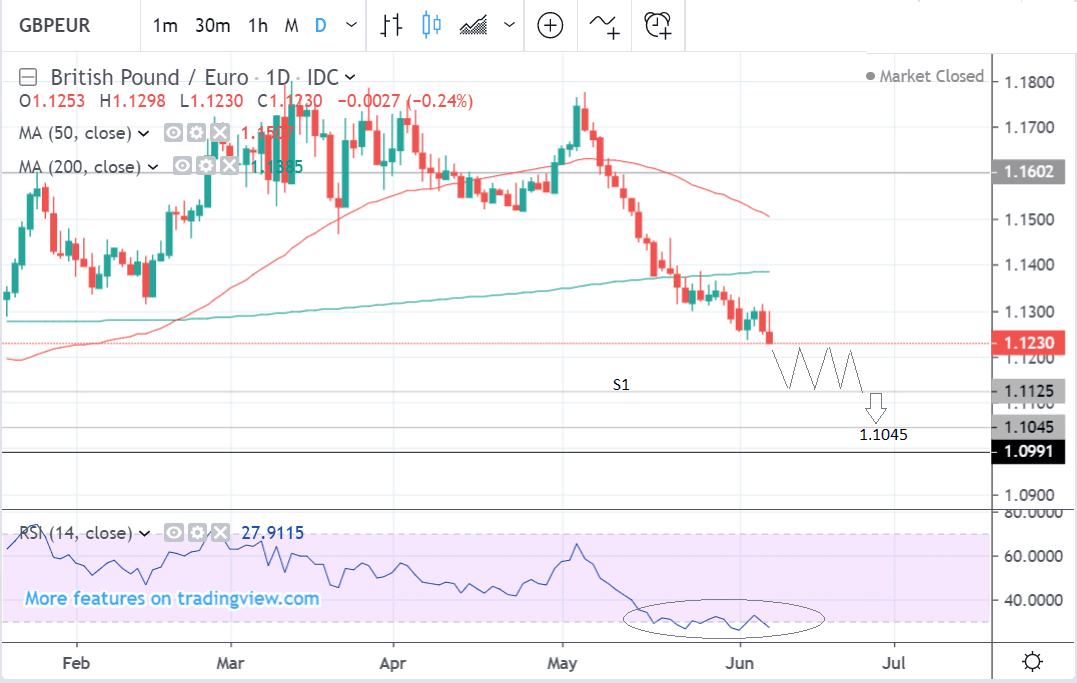 The daily chart tells a similar story - the pair is in an established downtrend which is likely to extend to a target at 1.1045 over the next 1-4 weeks.

The difference with the daily chart, however, is that the RSI momentum indicator is in the oversold zone, which is below 30, and this means the downtrend could be at risk of stalling or rebounding. It is highly likely that although it will go lower its downtrend will now be broken up by periods of sideways consolidation.

Nevertheless, we still see it as likely to continue down to an initial target at 1.1125 first, and then after some range trading eventually a second target at 1.1045. 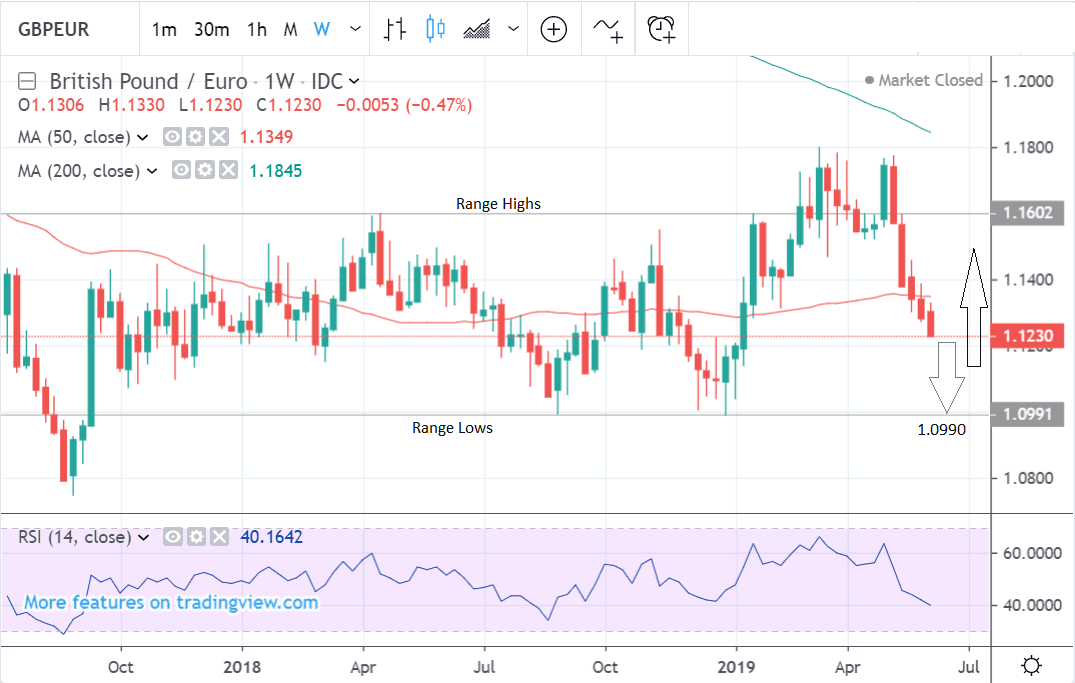 The weekly chart shows how the pair has fallen for five straight weeks in a row. It also shows the longer-term sideways trend stretching back over years.

In the long-term, the pair will probably touch down at the 1.0990 range lows before bouncing and continuing to unfold within the parameters of its sideways trend.

The Euro: Brussels Politics in Focus

The Euro has been strengthening of late with gains against the U.S. Dollar suggesting the single-currency is entering a broader uptrend.

The dynamics of the EUR/USD will be important for other EUR pairs, so we will keep an eye on this headline exchange rate.

Potentially important are speeches from ECB president Mario Draghi and De Guindos, although given the proximity to last week's ECB meeting, neither are likely to err much from the official stance, so their comments will probably not impact on the currency.

It could be that Draghi expands on the stance communicated last week.

We will also be keeping an eye on the meeting of Eurogroup finance ministers in Brussels on Thursday, June 13.

The meeting of the Eurogroup of the EU’s finance ministers could result in comments pertaining to monetary policy, the outlook for the economy or deeper economic integration - current hot topics to which the currency is sensitive - which could all impact the currency.

Also of importance will be any discussion over Italy's desire to bust Eurozone rules on taxing and spending.

The current Italian government wants to breach budget deficit rules to boost their economy, a move that will invite sanctions.

The showdown between Italy and the EU is a widely seen as a concern for the future functionining of the common currency area. For now the issue appears to be in hand, but should the situation lead to a 'crisis' we could well expect the Euro to come under pressure.

This is an issue to keep an eye on over coming weeks and months.

According to the meeting's official agenda, the key subjects under discussion will include the following: