- The ECB meets to decide monetary policy on Thursday

- The market reaction may be muted as baseline fundamentals remain unchanged

The recent run of poor data is not expected to alter the European Central Bank's (ECB's) baseline of optimism about the future, suggest a number of analysts we follow.

The release of the outcome of the ECB's most recent policy meeting is made public at 12:45 B.S.T. on April 26 and is arguably the most important event on the economic calendar for the Euro and European financial markets in general.

Consensus seems to be that the ECB will be less optimistic about the economy and dampen its rhetoric in regard to monetary policy normalisation - or adopt a more "dovish" tone - in central bank parlance, due to the recent run of poor Eurozone data.

The main question seems to be whether the poorer economic data in the period at the start of 2018 will result in the ECB actually delaying its timetable for dismantling quantitative easing (QE) or not. The removal of QE, which is a form of artificial liquidity stimulus, is a necessary prerequisite for the ECB to begin raising interest rates, which at current record low levels are due to a rise back up to more 'normal' levels. Current market-based expectations suggest a 60% probability the ECB will raise interest rates by mid-2019 - but this could change after the meeting if the ECB pours cold water on normalisation hopes.

The question is most significant for the Euro since higher interest rates are generally positive for a currency as they are a magnet to inflows of foreign capital, which are drawn by the promise of higher returns, so if the recent run of poor data delays the ECB in raising rates it would be negative for the Euro.

"Weaker EU data flow since the start of the year has led majority of consensus to believe that the Eurozone’s growth momentum has peaked," says Eugene Leow, an economist at DBS Bank.

According to Loew, a discrepancy exists between the slightly optimistic market view of the ECB's policy path and the 'actual' likely path the ECB will undertake.

The difference will probably close at the meeting as the ECB gives more concrete expression to a more cautious, gradual approach.

"The ECB will probably strike a balance that the growth momentum, while peaked, will continue. This will be enough for the market to close its gap with the ECB’s gradualist and patient approach in normalizing monetary policy. We continue to look for the euro to return this year’s gains and break below 1.20 eventually," adds the economist.

Stephen Gallo, a strategist at BMO Capital Markets sees scope for the ECB to downgrade its official stance lower in light of the weaker data.

"Given the upbeat nature of the ECB’s March communiqué and the recent negative economic surprises, there is plenty of scope for the April opening statement to adopt a more cautious tone," he says.

The more cautious ECB rhetoric which is expected will probably not include a change in inflation expectations, however, which are the key main drivers of ECB policy, so the changes may be interpreted as merely 'cosmetic' and unlikely to impact negatively on financial markets.

"We do not think the ECB will signal a full loss of confidence in its forecasts for CPI inflation to converge towards the 2% target in 1-2 years (i.e. we think that a major dovish surprise which causes the EUR to fall sharply is a low-risk outcome)," says Gallo.

Analysts don't appear to expect the ECB to talk down the value of the Euro. This had been raised as a possibility in order to help boost weak inflation (a weaker Euro encourages higher inflation by making imports relatively more expensive). However, talk on this point now seems to have subsided.

"We think President Draghi will find it extremely difficult to talk down the EUR this month. As our dashboard below shows (Graphic 2, see below), there is very little macro or market evidence the ECB chief can point to when it comes to talking down the EUR." 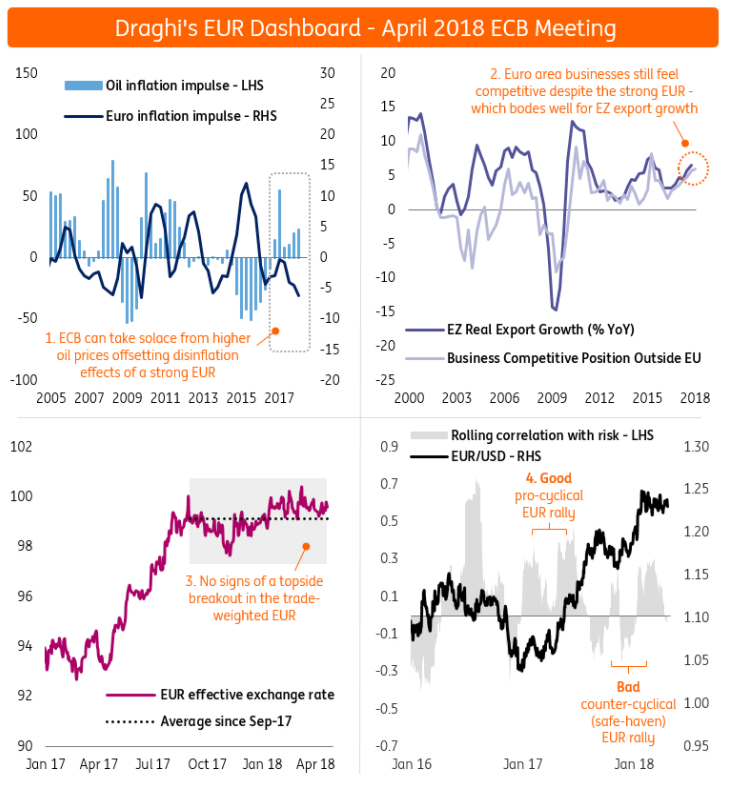 The main reasons Patel gives for this are as follows:

A) The strong Euro is a less significant factor because rising oil prices are likely to boost inflation pass through and make up for the Euro.

B) The Euro has less scope to fall as it is not overpriced due to exogenous i.e. non-fundamental factors.

The Eurozone's current burgeoning trade surplus is a further reason not to expect Euro-negative ECB rhetoric. A weaker Euro would exacerbate the problem of the Eurozone's rising surplus not help it, and it continues to draw attention from the likes of Trump who seek a more equitable trade relationship.

"President Trump had a swipe at the Eurozone's trade surplus yesterday and gave the Euro a bit of a reprieve," commented Kit Juckes, macro strategist at Société Générale, this morning.

Ultimately, the extremely "low expectations" going into the meeting argue for a lack of reaction from markets, says ING's Patel.

Commerzbank, meanwhile, makes the point that the recent weakness in EUR/USD appears almost solely driven by the strengthening US Dollar with the Euro merely a 'sleeping partner'. This suggests too much emphasis may be placed on the declining picture of Eurozone data.

"The leading indicators for the euro zone all disappointed recently which gives rise to doubts about an imminent monetary policy normalisation. However, we have been noticing for some time that the euro exchange rates only react very little to changes in the monetary policy outlook. I guess that the changes simply are not significant enough to justify a re-evaluation of the exchange rates," says Thu Lan Nguyen, an analyst at Commerzbank.

"Of course, a continued low rate of inflation and a now slightly weaker economy suggest that the ECB will take its time with an exit from its expansionary monetary policy," he adds, "However, for the market it seems relatively irrelevant whether the central bankers will hike interest rates three months earlier or later as long as the rate hikes principally still happen during the forecasting horizon relevant for the market participants," he adds.