The US dollar is looking surprisingly firm following the release of a poor US employment report.

With the dollar arresting its recent declines markets were wanting to see a beat of the 200K headline payroll figure to justify further buying.

The Bureau of Labor Statistics reported an increase of 160K.

However, as noted by ING’s Petr Krpata, it appears exchange rate markets are now more sensitive to chances in wages: 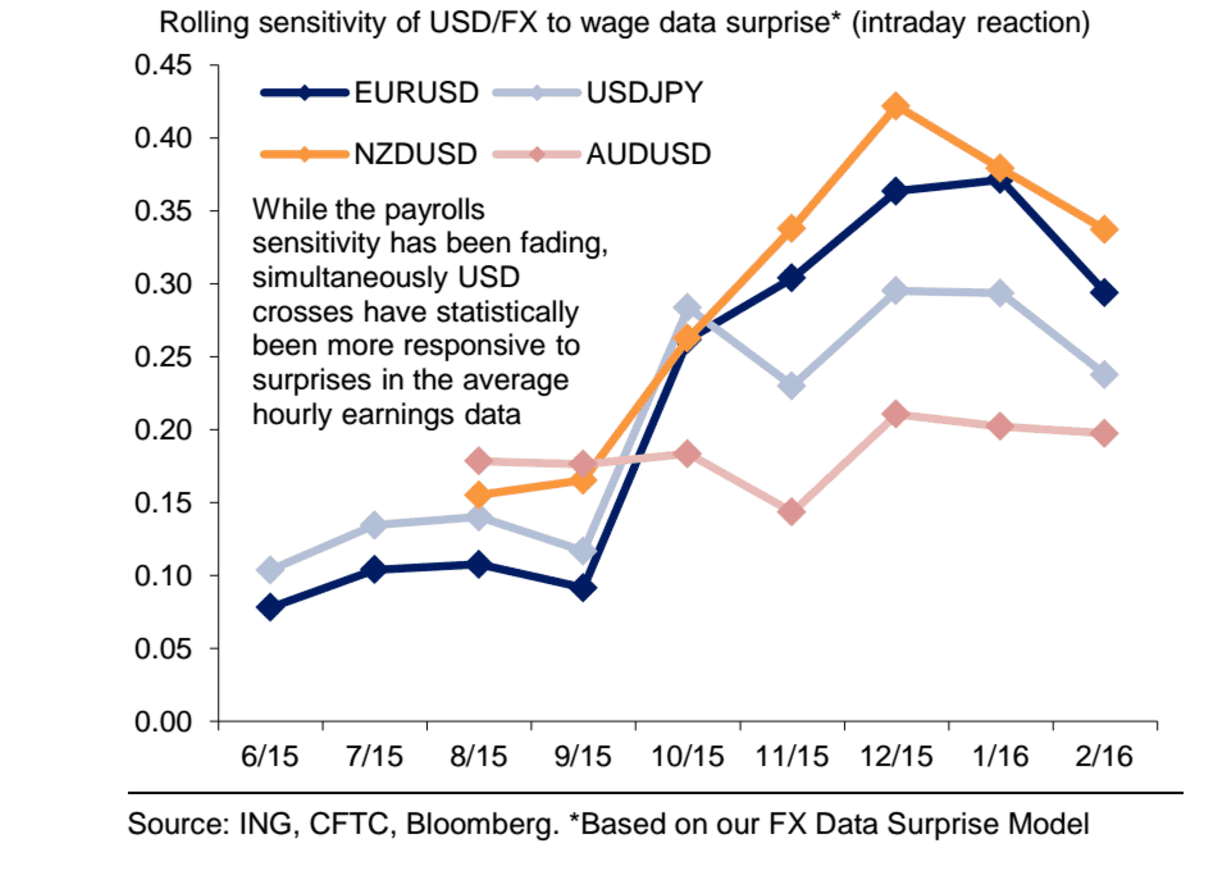 Therefore the release of average hourly earnings at 0.3%, inline with expectations, is why the dollar remains unruffled.

The dollar index is lower than where it started the day at 93.69 while the pound / dollar exchange rate is largely unchanged at 1.4470.

The euro / dollar is higher 1.1425, hardly a massive change if we consider the losses seen over the past 48 hours.

It is hard to see how the dollar can really break notably higher as the US Federal Reserve will find no justification in these data to raise interes rates in June.

“An interest rate hike next month is now looking unlikely as the general economic waters are far from calm. Weak growth at home and overseas is a major concern, as is poor manufacturing output, so Janet Yellen and the Fed are expected to keep the interest rate pause button pressed for a little longer,” says Dennis de Jong at UFX.com.

Nevertheless, this data is by no means a disaster for dollar bulls.

"At first glance, the April employment report was a bit of a disappointment – but the details suggest that the labor market has remained very robust. Payroll gains slowed to 160,000, and the unemployment rate stabilized at 5.0% despite a drop in the participation rate. But aggregate hours worked rose at the fastest pace since December, while the broader underemployment rate eased. Finally, average hourly earnings rose 0.3%, lifting the yoy rate to 2.5%," says Dr. Harm Bandholz, Chief US Economist at UniCredit Research in New York.

With regards to the GBP to USD exchange rate, there was simply not enough presented today to restart the April rally.

“It’s a weaker US dollar scenario for sure, but it will be interesting to see if the Pound can rally further and above the $1.45-$1.46 price range. Traders are becoming nervous about buying the Pound ahead of next week’s economic forecasts and interest rate guidance from the Bank of England,” says Nawaz Ali, UK Currency Strategist at Western Union Business Solutions.

Expectations Going into the Event

A move that is likely to take the Dollar back towards the April highs in the coming days.

On the Dollar Index the resistance that bulls will want to see broken is around 95.2 which is 1.7% higher. This would equate to around $1.1250 on EUR/USD.

Bank of America Merrill Lynch are positive on the dollar’s prospects today and “recommend being tactically bullish the dollar ahead payrolls. The solid employment report we expect (NFP +190k) will leave the 6mma average at a healthy 224,000 evidence of continued labor market tightening.”

Bank of America forecast wages to rise a healthy 0.2%, leaving the y/y change stable at 2.3%.

“Stability is not great but better than deceleration, which amidst a generally improving trend in wages is enough to keep the Fed on track for a June hike,” say BofA.

Ralf Umlauf, an analyst with Helaba Bank in Frankfurt notes that the euro is looking vulnerable.

The euro-dollar exchange rate has recently failed to surpass the resistance range of 1.15-17 (upper limit of the sideways range).

The chance of such a move has worsened from a technical perspective.

“Also it is worth noting that a firm US labour market report should be generally detrimental as interest rate speculation regarding the Fed has been very weak so far,” says Umlauf.

It is hard to find any analysts with a negative expectation on the NFP release.

The indications are solid, although the ISM manufacturing index was disappointing, the employment sub-component posted a moderate increase.

There was also a favourable sign from the service sector. Moreover, the initial jobless claims are at their lowest level for around 43 years and have even reached their lowest mark relative to overall employment since the figures began to be recorded.

The problem with expectations all being tilted in favour of one outcome is that disappointment is punished harshly.

"The current job market momentum seems to be quite strong, but our research leads us to believe that the health of the U.S economy, and especially of its job market, is overestimated," says Peter Rosenstreich, Chief FX Analys at Swissquote Bank in Gland, Switzerland.

Rosenstreich argues recent data is much more on the soft side as retail sales growth declines month after month.

"It sounds contradictory to us that job market conditions should improve while consumption hardly increases. A lower-than-expected NFP today will put a definitive end to the possibility of the Fed hiking for the second time since December 2015," says Rosenstreich.

That said, the markets appear to be aware of this outcome and are hesitant to bake further positive sentiment into the dollar with the dollar index looking softer at the London open.

The main dollar pairs are also settled suggesting we could be in for an interesting day if data misses expectations.

“While uncertainty around today’s payrolls report may have been exacerbated by the mixed signals from other US indicators this week, a strong report should provide further support to the US dollar,” say Lloyds Bank in a briefing to clients.