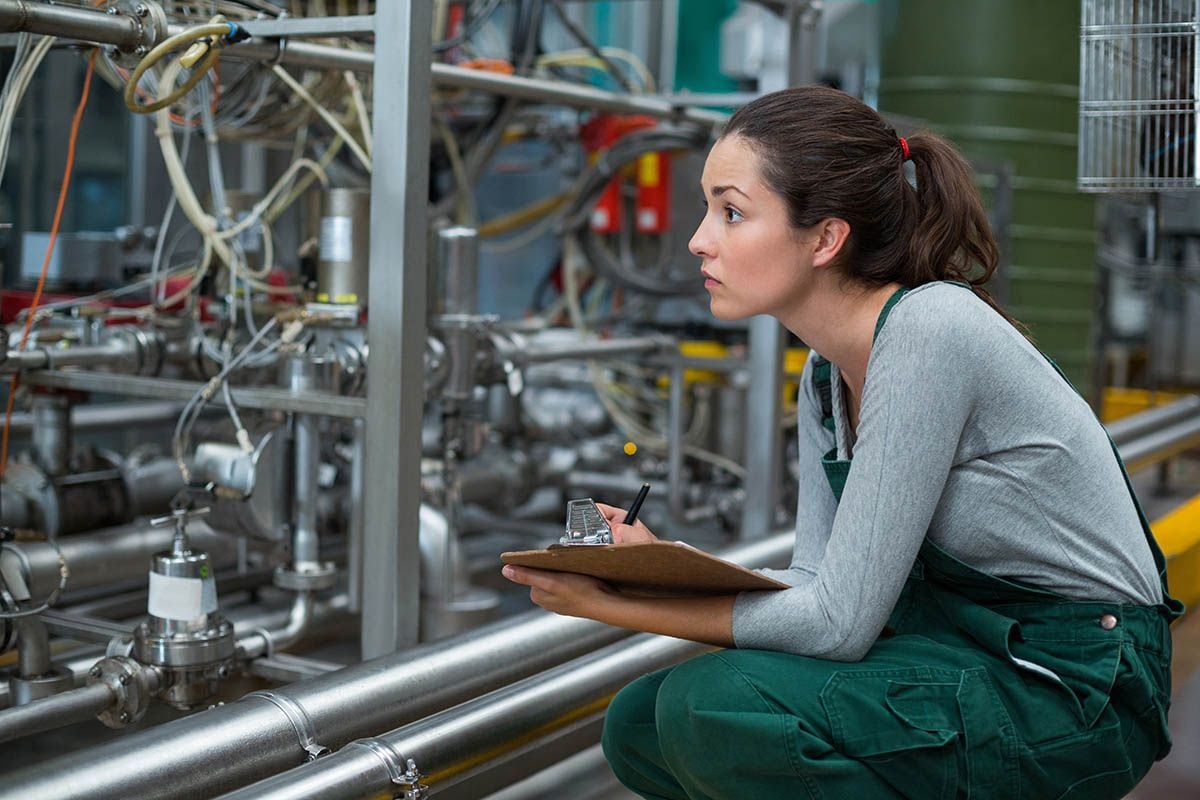 UK gross domestic product (GDP) is estimated to have grown by 2.1% in March 2021, the fastest monthly growth since August 2020.

The ONS says the boost to growth came as schools in some parts of the UK reopened throughout the month in line with the government's first step of reopening from a harsh winter lockdown.

The reopening of schools in England and Wales meant the economy's dominant service sector grew by 1.9% in March, while retail trade sales continuing to show strength.

GDP nevertheless fell 1.5% quarter on quarter in the first quarter of 2021 as the lockdown surpassed activity, but this was less severe than the -1.6% the market was anticipating.

The economy shrunk 6.1% year-on-year in the first quarter, in line with the market's estimate.

The revival in March was aided by a strong showing in the construction sector which grew 5.8% in March, which is well ahead of the 0.60% the market was expecting.

Also shoring up the economic rebound was Manufacturing Production which grew 2.1%, which is ahead of the 1.0% the market was anticipating. 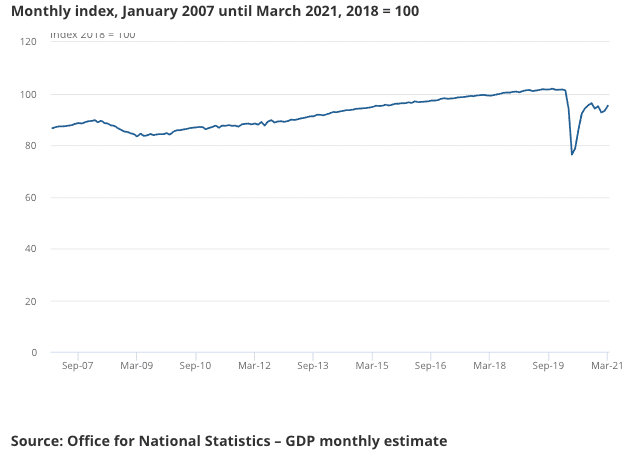 “Despite the first quarter economic contraction, the economy is heading in the right direction. Last month’s initial growth spurt has been revised upwards from 0.4% to 0.7%, as have 2021 projections from the Bank of England, which now predicts the economy will grow 7.25% this year. It will be a record-breaking year for GDP growth, but of course one which follows a record-breaking contraction," says Paul Craig, portfolio manager at Quilter Investors.

The latest set of data does not account for the major stage of reopenings of non-essential retail in April, which is expected by economists to boost subsequent GDP data prints.

Economists expect a surge in consumer spending as savings accumulated during the lockdowns is put to work, driven by improved confidence that comes with the UK's vaccination drive. 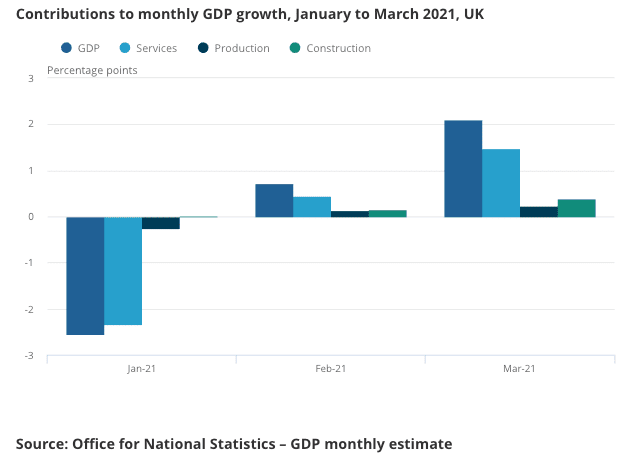 “It is extremely likely that the pause in economic activity will lead to some permanent scarring, but widespread pain should prove temporary and many consumers are in a very good place with considerable accumulated savings to turn on the spending taps once the restrictions are lifted," says Craig.

Economists at ING Bank say they are looking for growth of 5% in the second quarter on the back of a better than expected first quarter performance.

"Since the start of the second quarter, we’ve also seen a broader improvement in everything from consumer confidence to the number of people taking public transport. In many cases, these more-timely indicators are now exceeding the level they reached last summer," says James Smith, Developed Markets Economist at ING.

ING say they are more cautious than the Bank of England who project the economy to recover to pre-pandemic levels by the end of 2021.

They say achieving this will depends on three factor going forward:

1) The level of pent-up demand is still fairly uncertain.
2) The Treasury’s ‘super-deduction’, a fairly generous tax incentive for firms to make investments in machinery/equipment, will boost (or more accurately perhaps, bring forward) CapEx this year – though again it’s still fairly unclear by how much.
3) The inclusion of Covid-19 testing and vaccines into the GDP figures has inflated the size of the UK economy, and by a big enough margin to make a difference to when the economy will return to pre-virus levels. 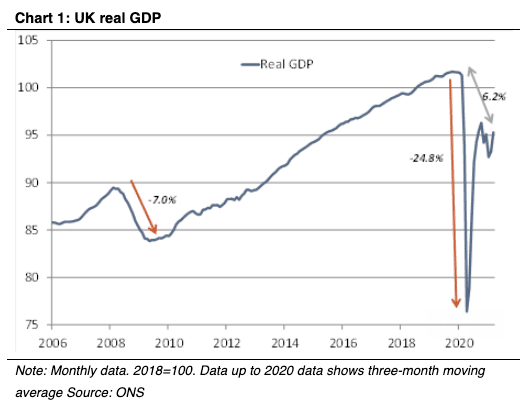 Economists at Berenberg Bank say the current suite of data available all points to their above-consensus forecasts for the economy playing out. 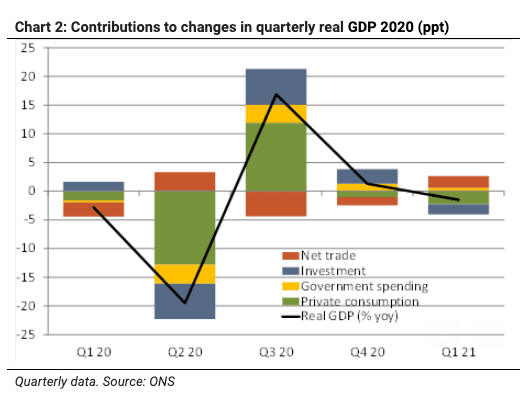 Economists at Capital Economics meanwhile say the burst of growth in March shows that the recovery has been gathering momentum more quickly than they had thought, suggesting risks to their forecasts for the economy to return to its February 2020 level by the end of 2021 are to the upside.

"The 2.1% m/m gain in GDP in March was an impressive result given that there were few changes in the lockdown restrictions," says Ruth Gregory, Senior UK Economist at Capital Economics.

The reopening of sectors in the coming months should trigger rises in GDP of at least 3.0-3.5% q/q in the second and third quarters according to calculations made by Capital Economics.

"That would take the economy back to its February level before the end of the year. If anything, these figures suggest that the economy could regain its pre-crisis level even sooner," says Gregory.