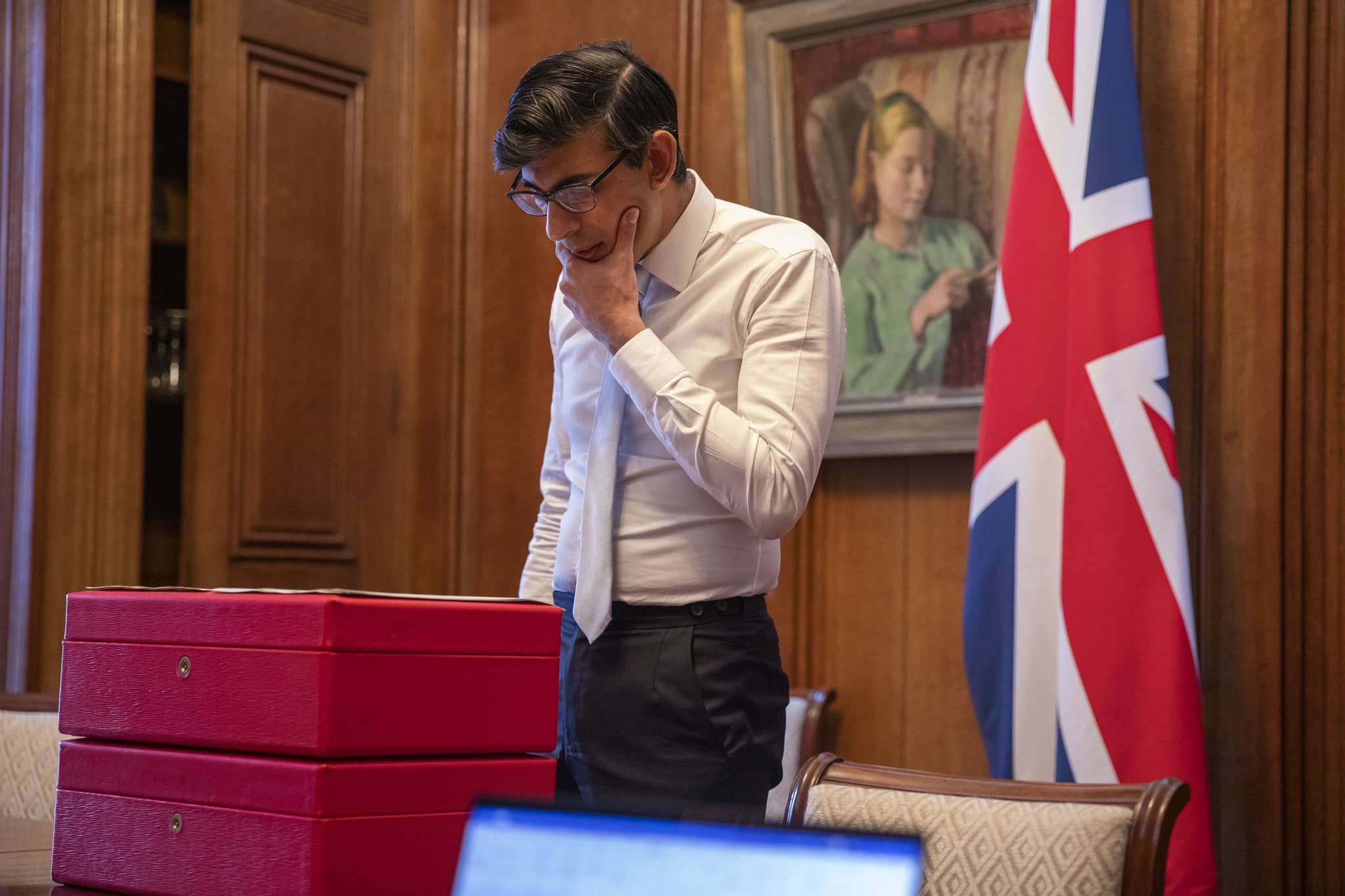 Above: The Chancellor Rishi Sunak works on his Spending Review speech with members of his team in his offices in 11 Downing Street. Image copyright Gov.uk.

Fears that tax increases and spending cuts would be required over coming years grew following the November Spending Review, issued by Chancellor Rishi Sunak on November 25. The Review came alongside the latest set of economic forecasts from the independent Office for Budget Responsibility (OBR) which showed the country's fiscal deficit was set to rise sharply.

The deficit is the difference between what the government earns and what it spends, with the short-fall being made up by borrowing,

"Our main takeaway is the deterioration of the structural deficit to 4% of GDP, from about 2% of GDP pre-virus. This weakened structural position reflects the impact of Brexit as much as the virus, and suggests that the government will need to take deficit-reducing measures before the end of this parliament in order to avoid having debt to GDP levels drift ever higher," says Fabrice Montagné, an economist with Barclays. 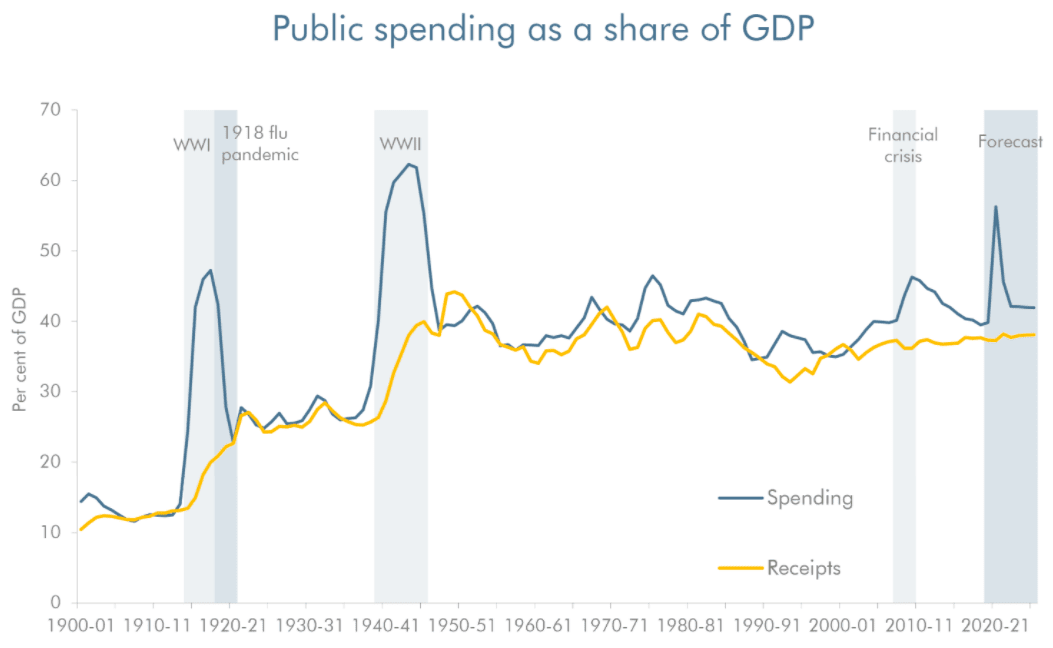 The OBR on Wednesday revised up its forecast for borrowing this year to £394BN - which is 19% of GDP — from the £372BN forecast in August.

The OBR forecasts borrowing will fall to 7.4% of GDP in 2021/22 and 4.4% in 2022/23 as the UK economy grows as the amount borrows as percentage of GDP falls. This is an example of how an economy can grow itself out of growth, something a number of economists are urging the Chancellor to strive for.

"Despite borrowing forecast to reach £394 billion this year, there are reasons to be optimistic - with a vaccine rollout on the horizon, the UK economy should be able to grow itself out of the deficit. So, despite a sharp increase, the deficit should come down sharply once the economy starts to recover," says Jonathan Gillham, PwC chief economist.

But, the OBR's forecasts show that should tax and spending levers remain unchanged the deficit will fall to 4% in 2023/24 and remain stuck around here.

Where the deficit steadies is important, as this becomes a long-run 'structural' deficit - i.e. the economy stops growing itself out of debt. This is inability of an economy to continue growing out of debt owes itself largely to the scarring wrought by a period of crisis, such as that dealt by the coronavirus.

The 'structural' deficit was at around 2.0% prior to the covid-19 crisis, and current OBR estimates suggest it will be at around 4.0% by the time of the end of this Parliament.

"The government will need to take deficit-reducing measures before the end of this parliament in order to avoid having debt to GDP levels drift ever higher," says Montagné.

Sunak told Parliament he acknowledges "a responsibility, once the economy recovers, to return to a sustainable fiscal position".

"A 4% deficit is inconsistent with this pledge, as it implies that the debt-to-GDP ratio still would be rising in five years' time," says Tombs. "The Chancellor would have to reduce public spending and raise taxes by about £40B, if he were to readopt his previous target of limiting cyclically-adjusted borrowing to only 2% of GDP, which would meaningfully drive down the debt-to-GDP ratio."

The scale of the debt surge has lead to concerns the government will be pressured into cutting spending and raising taxes too soon by 'hawks' in the government and Conservative Party. Conservative-leaning newspaper The Telegraph on Thursday ran a piece saying the country is now "facing ruin" due to the economic crisis and the government's failure to rein in the state.

The newspaper's Alistair Heath accused the government of "sticking with its promise of years of French-style, debt-fuelled public binging on grands projects – some useless (HS2), others worthwhile (roads, hospitals and broadband) – and lots more cash on day to day spending, not least the levelling-up fund, despite the radically changed economic backdrop."

He adds, "the only cuts unveiled at the Spending Review were symbolic".

The pressure from Conservative hawks to cut spending (not necessarily raise taxes) will likely grow over coming years.

"Its probably more a question of when, rather than if, consolidation measures will be announced to mitigate debt sustainability concerns," says Montagné. 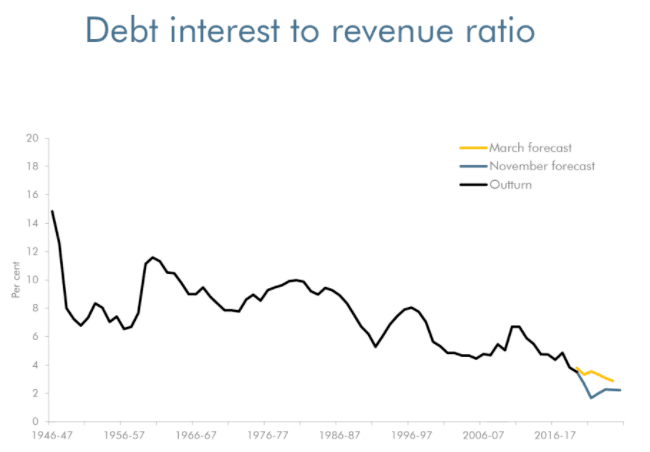 Above: Crucially, the cost of borrowing to fund the deficit is at record lows, with the OBR lowering their forecasts for the cost of debt even further.

But, the scale of cuts to spending or tax rises might still be less than that implemented by the coalition government that took over in 2010, provided the economy recovers sharply in 2021 and 2022.

"While the downside scenario looks scary, it remains less bad than the severe hit from the global financial crisis of 2008/09, which opened up a gaping structural deficit that needed to be corrected by a painful fiscal correction. Between 2008 and 2012 public borrowing averaged 8.1% of GDP," says Kallum Pickering, Senior Economist at Berenberg.

At 8.0% the structural deficit following the previous financial crisis was notably larger, which prompted a series of sharp spending cuts that Labour politicians described as a policy of austerity.

However it appears that the Government could in fact risk growing the structural budget deficit in the future if it opts to cut spending and raise taxes too early.

"The bigger risk to worry about is not that the government overdoes the stimulus, but that it falls short of an adequate medium-term response because deficit hawks persuade it to pull back policy support prematurely," says Pickering. "The risk of an unnecessary fiscal tightening. After five years of crippling Brexit uncertainty and a badly handled pandemic, the UK would do well to avoid another serious policy error."

Tax rises and spending cuts are widely held by economists to slow economic growth, therefore if a government goes too hard and too soon with such measures, there is a risk they ultimately handicap their own efforts to reduced debt.

"The benefits of spending aggressively to finance job and income support as well as public investment programmes, at a time when economic output is more than 10% below normal, far outweigh any distant risks that could materialise from the ongoing rise in public debt," says Pickering.