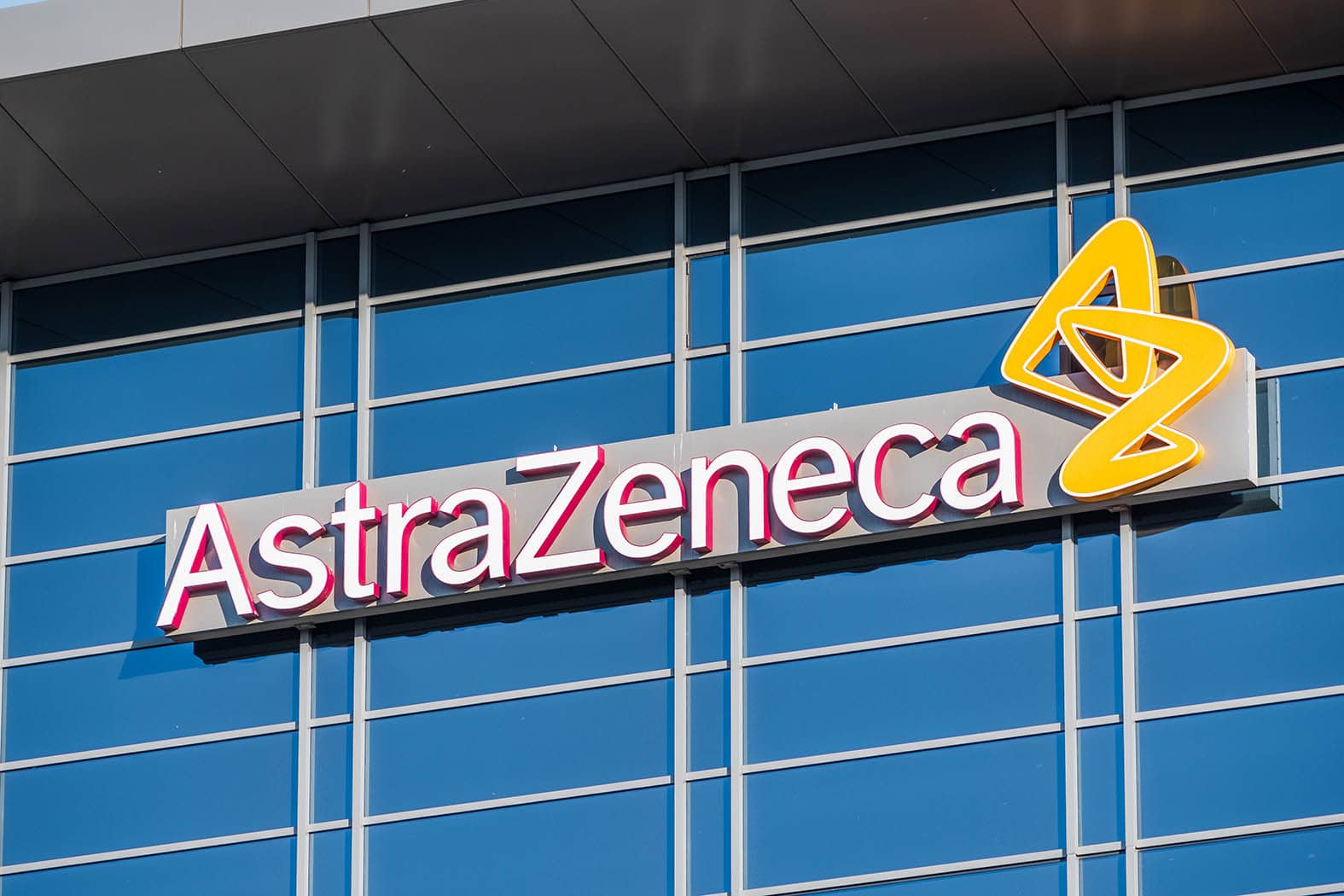 According to AstraZeneca, two different dosing regimens demonstrated efficacy with one showing a better profile at 90%, while no hospitalisations or severe cases of COVID-19 in participants treated with AZD1222.

"Our updated analysis suggests we are now on track for the majority of the developed world to immunise its vulnerable population to COVID by the spring and the entire population by mid-year," says Robin Winkler, Strategist at Deutsche Bank. "There may even be upside to this estimate with some countries achieving herd immunity before summer."

Based on the assessment of the orders put in by various countries for the various vaccines that have already shown efficacy, Deutsche Bank say they are most confident the U.S. and UK will likely be able to immunise the most vulnerable residents - healthcare workers and the over-65s - by the spring.

"By the middle of the year, the US and UK should reach full herd immunity," says Winkler, adding that this timeline is also realistic for Canada and for Japan, both of which will have good access to Moderna as well as to Pfizer and AstraZeneca. 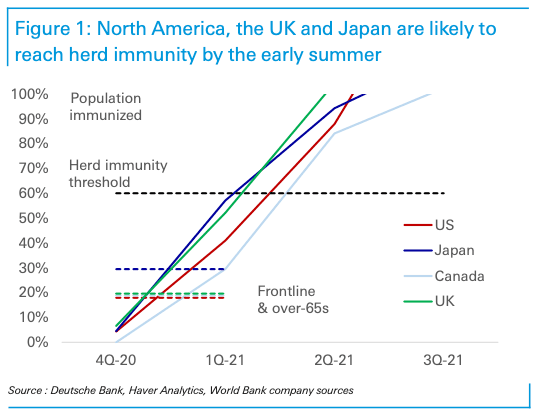 The results from AstraZeneca follow on from those issued by Pfizer/BioNtech and Moderna, both of which reported efficacy at above 90%. Whereas the Pfizer and Moderna vaccines rely on mRNA technology, the AstraZeneca technology is considered a more traditional vaccine.

This matters - the AstraZeneca candidate can be stored at fridge temperature while the Pfizer and Moderna vaccines are more unstable and need colder temperatures; Pfizer's vaccine needs to be stored at minus 70 Celsius.

In addition the cost of the two mRNA vaccines are said to be considerably more expensive than the AstraZeneca candidate, making it the 'mass vaccine' that can go to more countries, and faster.

"It is a big deal," says Winkler. "Emerging Markets, most notably Brazil, Mexico, India, Indonesia are also likely to be big beneficiaries of the Astrazneca vaccine as well."

While Deutsche Bank see the U.S. and UK being forerunners in the race to herd immunity, the EU is seen being a few months behind.

"Europe, can also achieve similar timelines to the US, but it will be dependent on Astrazeneca achieving a 90% efficacy rate with its dosing regimen or, alternatively, one more vaccine candidate such as J&J being successful. That the 90% efficacy rate is achieved with less than full doses is an important detail as it increases the amount of vaccines available. If neither of these conditions are met herd immunity in Europe is likely to be delayed by a few months to Q3," says Winkler. 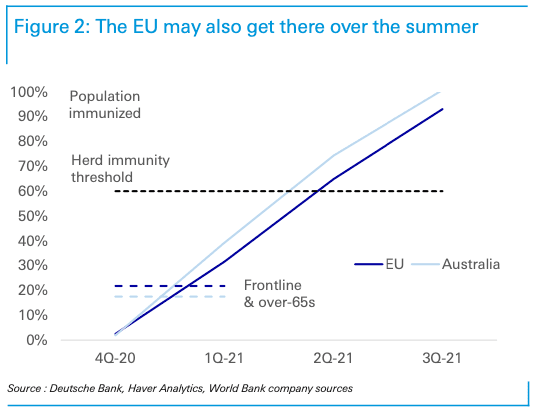 But because covid-19 has shown itself to be highly seasonal, the delay should not disadvantage the EU in a meaningful manner.

The developments leave Deutsche Bank negative on the U.S. Dollar's prospects over coming months, while the commodity dollars such as AUD, CAD and NZD are expected to outperform alongside Emerging Market names.

"From a market perspective, the vaccine news cements our bullish view on most pro-cyclical currencies against the dollar through the turn of the year. We believe Scandinavian, dollar block and many EM FX currencies can all make new highs into year-end and we like being short the broad trade-weighted dollar," says Winkler.

According to Deutsche Bank, most economic activity however will likely resume once the most vulnerable members of society are immunised, primarily the elderly.

"As mortality rates rise exponentially with age, immunising all those who are older than, say, 65 years would drastically reduce hospitalisations and fatalities even if economies then reopened, pushing up cases among the less vulnerable part of the population," says Winkler.

Deutsche Bank estimates show the U.S., UK, Japan, and Canada will be able to immunise their vulnerable in the first quarter of 2021 and reach herd immunity in the second quarter. The EU and Australia may also be able to immunise their very most vulnerable in the first quarter, "though it will be more a stretch than in North America," says Winkler.

The US, UK and Germany have meanwhile each announced plans to begin vaccinations in December, while Spain said it would start administering the vaccine in January.

The UK could give regulatory approval to Pfizer-BioNTech’s Covid-19 vaccine as early as this week, even before the U.S. authorises it, the Telegraph newspaper reported on Sunday.