The U.S.labour market defied expectations on Friday when Bureau of Labor Statistics data revealed job gains that helped push the unemployment rate a full percentage point lower in October, although rising political uncertainty and a resurgent coronavirus have seen the outlook grow murkier in November.

Non-farm payrolls rose 638k in October as the economy recovered more jobs previously lost to the coronavirus, outperforming an economist consensus for a 595k increase, while the estimate for September was revised from 661k to 672k.

The job recovery helped to push the unemployment rate down a full percentage point to 6.9% when expectations were for a decline to only 7.7%, meaning it has fallen by more than half from the peak of 14.7% in April.

"Although the participation rate reversed the previous month's drop, a 2.2 mn gain in employment on the household survey sent the unemployment rate down to 6.9% from 7.9%," says Katherine Judge, an economist at CIBC Capital Markets. "As new virus cases continue to skyrocket, the previous re-opening of businesses appears to be less sustainable, suggesting that employment gains could slow or possibly reverse in the coming months." 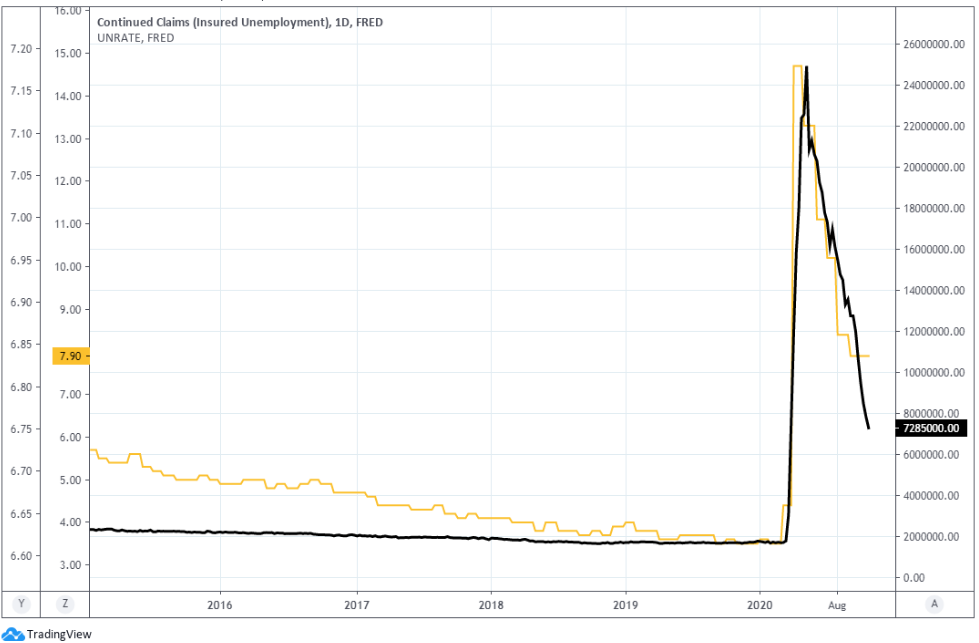 America's job recovery continued even as a third wave of coronavirus took daily totals to new highs that have been bettered in November, although the risk of renewed curbs on activity has risen in at least some parts of the U.S. alongside the number of new infections.

States themselves, rather than the federal government headed by President Donald Trump, are largely responsible for shutdown decisions in the U.S. and may decide to follow the lead of other countries instead of the guidance that comes from the White House.

"By the end of the year, cases will be running at about 500K per day, unless new widespread new restrictions are imposed and/or people dramatically reduce their interactions with others outside their immediate household," says Ian Shepherdson, chief economist at Pantheon Macroeconomics. "We aren't scaremongering here; to reach 500K cases per day by year-end, the numbers just need to keep rising at their current pace. Covid loves cold weather—hence the June/July outbreaks in meatpacking plants, where it's always winter—so it's easy to imagine even faster growth in cases."

The U.S. economy rebounded more strongly than was expected last quarter, leaving it within arms reach of December 2019 levels of output when GDP rose 33.1%, reversing much of the -31.4% decline seen in the prior period. However, that recovery would be threatened by any new shutdown like those seen in Europe, where economists now tip a double-dip contraction that could yet extend into the New Year. 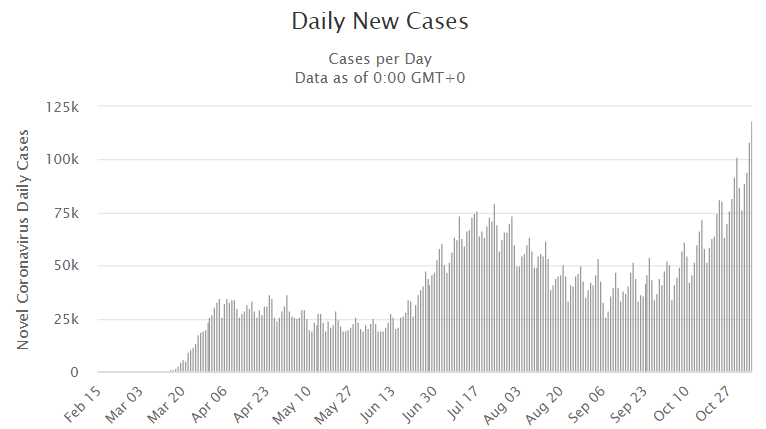 The outlook is made murkier still by mounting political uncertainty, with President Donald Trump doubling down behind allegations of fraud in Tuesday's election and seeking legal action in a number of states where an earlier lead was washed away by a last minute surge in postal votes.

"It wasn't a Blue wave, it was the ripple that looks to have just got Joe Biden over the line but without a majority in the Senate (let’s see how the Jan 5th Georgia runoffs go)," says Jordan Rochester, a strategist at Nomura. "Expect ripple like fiscal stimulus, enough to keep things ticking along but not to materially change the outlook. US growth is likely to underperform in the medium term and the Fed is the “only game in town.” What does that mean? That's lower US growth, lower US yields and a lower US dollar too."

The market's least preferred scenario of a contested election outcome and possibly months of wrangling in the courts would be a certainty if Joe Biden is declared the winner as was seen likely by the financial markets on Friday.

This was after the opposition candidate was said to have taken the lead in key swing state Pennsylvania earlier in the session, which offers enough votes in the electoral college for him to have clinched the presidency.