The U.S. economy surpassed expectations last quarter as the consumer powered a record rebound out of the coronavirus crater, potentially leaving lawmakers on the hook in more ways than one for any upset in the final quarter.

U.S. GDP rose 33.1% in the third-quarter when consensus had looked for only a 32% increase, Bureau of Economics Analysis figures show, reversing much of the -31.4% decline seen in the prior period and leaving the economy within arms reach of December 2019 levels of output.

“The record headline growth number looks spectacular, but it leaves the level of GDP 3.5% lower than in Q4 last year, before Covid struck. To reverse the Q1/2 hit in full, growth in Q3 would have had to be 53.3%,” says Ian Shepherdson, chief economist at Pantheon Macroeconomics. “Absent new stimulus, and with Covid infections spreading rapidly, we’re sticking to our 4% forecast for Q4 growth, though the margin of error here is large at this point.”

Thursday’s data is official confirmation of a comeback from the collapse brought on by state level shelter-in-place orders earlier in the year, when lethality of the new, sometimes pneumonia-inducing coronavirus was unknown.

But the recovery is expected to slow already in the final quarter, partly as a result of statistical ‘base effects’ but also due to the pre-election politics of Washington lawmakers who allowed financial support programmes and safety nets for households to lapse with the July month. 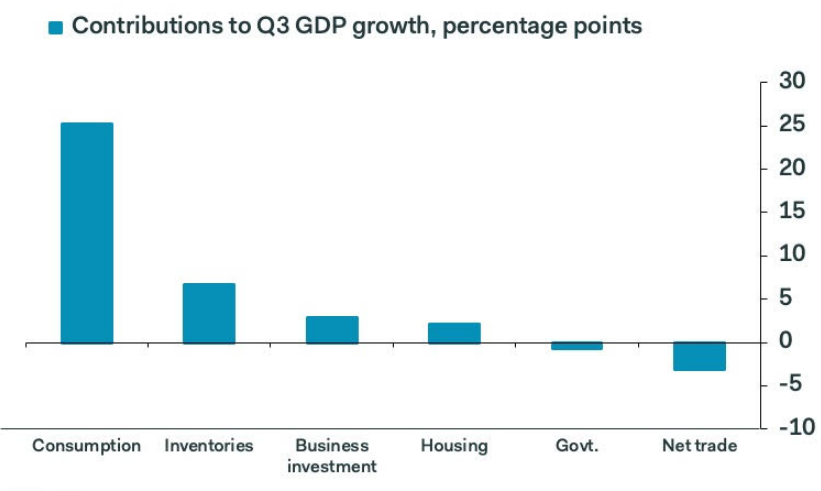 Thursday’s data underlined the risk posed to the recovery by Washington’s inaction when it showed a surge in personal consumption expenditures, which rose more than 40%, driving the rebound as business investment, inventory accumulation and international trade trailed behind.

Increases in those categories was enough to offset declines in government spending but with funding provided by the CARES Act having long since lapsed, the danger is that consumers are unable to match their earlier pace in the final months of the year and that this compromises the recovery.

“There are 10 million fewer Americans in work than in February. There is a long way to go until the economy has fully healed and there could be more economic pain ahead,” says James Knightley, chief international economist at ING. “Given the potential health and economic impact of a European style spike in Covid and the prospect of weaker income growth, the risks are increasingly skewed to a sub 2% GDP growth reading for 4Q 2020. If aggressive containment measures are introduced in December it will likely be negative.”

Other data released on Thursday by the Department of Labor suggested more than 7 million Americans were still on welfare benefits in the week ending October 17 after having filed for unemployment protection earlier in the year. The data reports only those claiming welfare, while ignoring the recently redundant who’re not doing so.

There were 751,000 new initial claims in the subsequent week ending October 24 although the +7 million number of continuing claims, which is the most relevant number for official measures of joblessness although not the only one, has come down from more than 10 million in late September.

Cares Act funding provided at least some money to all households while also being more generous to the unemployed than regular insurance programmes, so its lapsing is an automatic headwind for the final quarter economy that partly explains economists’ lower forecasts for the period.

But the headwind risks spilling over into the New Year because neither the governing Republican Party nor the opposition Democratic Party has a congressional majority and the new congress that results from Wednesday, 03 November’s election will not be installed into office until late January.

The consensus among pollsters and in the market is that a Democratic Party win is the most likely outcome next week, with good prospects for a so-called clean sweep where the Senate is taken from the Replican Party, which might be a worst case scenario outcome for those hoping to see a new stimulus bill emerge from Washington any time soon given the incumbent President Donald Trump might be unlikely to support one following an election loss.

A surprise Republican victor might ensure enough opposition support in the Democrat-held House of Representatives to enable a Republican bill to pass, but even so this would be coming late in the final quarter and may not be enough to prevent a sharp slowdown or even fresh contraction.

"The pace of recovery is expected to slow going forward," says Nathan Janzen, a senior economist at RBC Capital Markets. “Spending on services - particularly on anything tourism/entertainment - is likely to remain soft as long as the virus threat remains.  And while governments have been reluctant to reimpose containment measures, accelerating virus spread still means the risk of more stringent lockdowns remains. The early bounce-back in economic activity has been faster than initially feared, but the road to a full recovery still looks long.” 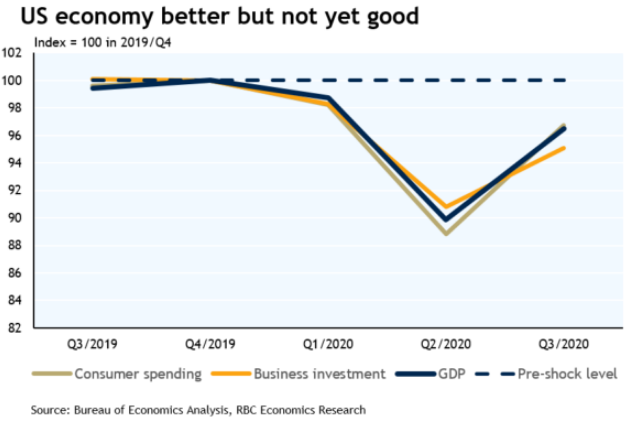