The UK economy appears to have reached a nadir in June, according to flash PMI data released on Tuesday that came in well ahead of analyst expectations.

Data showed that the manufacturing sector actually started to expand again but the services sector - which is by far the largest component of the UK economy - is still in contraction mode.

The Composite PMI - which weighs the two to give an assessment of the broader economy - read at 47.6, which is above the consensus forecast for 41 and the previous month's reading of 30. The rise since May (+17.6 points) was the largest for the Composite PMI since the start of the series in January 1998, which highlighted a decisive shift in momentum according to IHS. 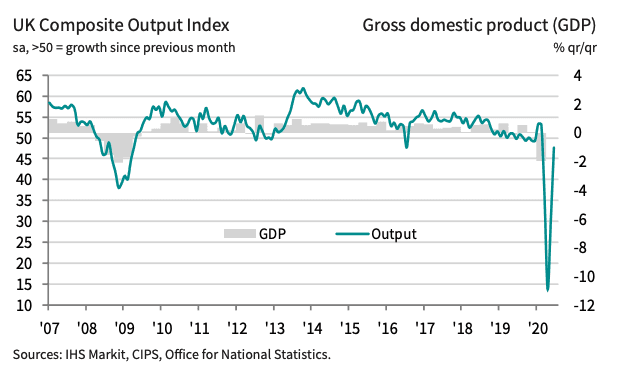 The PMI data is the most closely watched survey of the economy as it offers such a timely insight, with a figure under 50 representing contraction and a figure above 50 representing expansion.

Today's data therefore shows that only the manufacturing sector is growing again, but the scene is set for a recovery right across the board in July, particularly as lockdown measures in the UK are eased further.

"June data indicated a vastly improved overall picture across the UK private sector, with the downturn in total business activity continuing to steady after the record rate of decline seen at the height of the lockdown during April. Another drop in service sector activity contrasted with a return to production growth among manufacturing companies in June," said IHS Markit, compilers of the PMI data, in a report detailing the developments.

At the same time, private sector firms also signalled a rebound in business expectations for the year ahead, with confidence reaching a four-month high in June.

According to IHS Markit, survey respondents mainly noted that the easing of restrictions related to the coronavirus disease 2019 (COVID-19) pandemic had
a favourable impact on economic activity, with business operations gradually resuming in a number of sectors and staff brought back from furlough.

However, there were also widespread reports that underlying demand remained very subdued and cutbacks to client spending had acted as continued drag on overall business activity. 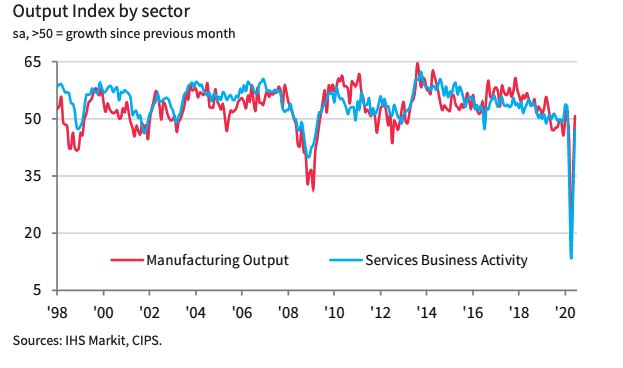 Looking ahead, manufacturers indicated a rise in business optimism to its highest since September 2018. Expectations of higher output in the next 12 months reflected hopes of a sustained recovery in manufacturing operations from the slump in production volumes seen during the initial phase of the COVID-19 pandemic.

IHS Markit economists forecasting the UK economy to contract by 11.9% this year before expanding by a relatively modest 4.9% in 2021, which is far more cautious than the 15% surge anticipated in 2021 by the Bank of England.

James Smith, Developed Markets Economist at ING Bank says a return to normality is being overstated by those who read a v-shaped (rapid) recovery in today's PMI data.

"PMIs are constructed by asking respondents whether they are seeing conditions improve or deteriorate - and unsurprisingly in June a much greater share of firms reported things getting better. However this improvement comes off a very low (in some cases, zero) base, and it also doesn’t tell us anything about the magnitude of the rebound," says Smith, adding:

"We’d therefore treat these figures with some caution."

However, Nikesh Sawjani, UK Economist at Lloyds Bank makes the argument that the PMI data could be downplaying the scale of improvement, particularly in the services sector.

"It is likely that this is underestimating the overall level of activity in the sector, given that the PMI does not capture trends in retail or the public sector. Arguably, these are the two areas of the broad sector that have benefited the most from the further lowering in restrictions in June. Ultimately, the outlook for the economy remains contingent on the rate at which restrictions are eased. With a further scaling back from July – the near-term improvement in sentiment is likely to continue in the coming months," says Sawjani.