- Prompting upward revision back to 50.0 for IHS Markit PMI.

- As election uncertainty lifts, but some firms lag in rebound.

- Comes amid manufacturing and construction contractions.

The UK economy's service sector caught a boost ahead of year-end courtesy of the decisive outcome of the General Election.

The pickup is largely down to improved sentiment reflected by businesses who submitted their responses after the General Election.

"The upward revision to the services PMI in December from the flash reading is an encouraging sign that the lifting of the threats of a no-deal Brexit in January and a business-hostile Labour government has triggered a recovery in activity," says Samuel Tombs, Chief U.K. Economist at Pantheon Macroeconomics. "Crucially, the vast majority—about 85%—of responses to Markit’s survey were received before the general election on December 12, implying that firms that submitted results too late for the flash reading were much more upbeat than the rest."

The Pound nudged higher following the release of the data, as markets saw the potential for the UK economy to pick up some momentum in early 2020.

Some services firms also saw their sharpest increase in new work orders since July, after previously having reported 'domestic political uncertainty' as something that was preventing clients from committing to new work.

Meanwhile, those who reported lower output for the month cited "delayed spending" ahead of the election.

"The decisive result of the General Election appears to have given the services PMI a bit of a boost," says Thomas Pugh at Capital Economics. "There could be a post-election bounce in the data over the next few months as confidence improves. If this is confirmed in January and February then it should be enough to convince the Bank to keep rates at 0.75%." 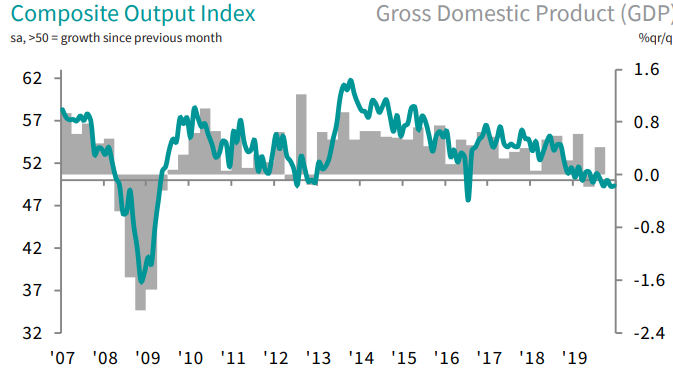 Monday's data follows similar surveys of the manufacturing and construction sectors, which revealed that both industries continued to struggle at year-end and enough for woes in those areas to more than offset the upward revision to services output as far as the economy is concerned. IHS Markit's composite output index, which measures output from all three main sectors on a weighted basis, remained unchanged at 49.3 in December and so continued to indicate a final quarter contraction for the economy.

"Admittedly, the PMIs have under-estimated quarterly GDP growth by an average of 0.2ppts over the past four quarters. But at the very least the surveys suggest that underlying growth is very weak and that the risks to our already downbeat forecast of no GDP growth in Q4 lie on the downside," Pugh says.

The UK economy had a tough few quarters in 2019 and by most accounts will have slowed for the year overall. Consensus has envisaged from moment one GDP growth of 1.3% for the year, down from 1.4% in 2018, although even that now looks to be an ambitious target. The economy grew 0.4% in the third quarter and by 0.6% in the first quarter of last year, but it contracted 0.1% between those two periods and needs an unlikely expansion of 0.4% for the final quarter just to meet the downbeat consensus.

Furthermore, forecasts collected by HM Treasury in December suggest the market is even more downbeat on the economy's prospects for the year ahead, with consensus last month anticipating a 1.1% increase in GDP growth for 2020. City forecasters including Bank of America, Barclays, Citigroup, HSBC and J.P. Morgan were also all still anticipating a 1.3% increase for 2019.

"Investment by export-orientated firms probably will remain subdued as long as Brexit-related trade barriers loom ahead. But firms focussed on the domestic market likely will invest more this year, safe in the knowledge that corporation tax won’t rise, nationalisations no longer are a threat, and the burden of regulations won’t increase significantly now that a Labour government isn't a possibility within the next five years," says Samuel Tombs, chief UK economist at Pantheon Macroeconomics. "We remain relatively optimistic about the near-term outlook for GDP and look for quarter-on-quarter growth to average 0.4% over Q1 and Q2, stepping up from 2019's 0.2% average."

Above: Private sector forecasts for UK GDP and its components in 2019. Collected by HM Treasury in December 2019. 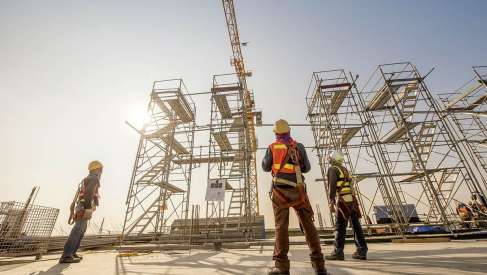 The UK construction industry showed signs of life in January, according to the latest IHS Markit PMI survey, although the nascent ebbing of a protracted downturn might not last for long because the prospect of an 'Australia deal' Brexit is now set to haunt the sector throughout the year ahead. 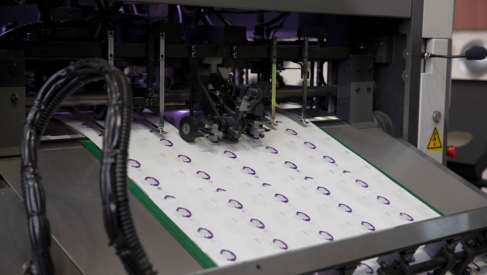 The Bank of England Says Risks to Outlook "Broadly Balanced," after Forecast Dow…

The Bank of England (BoE) said Thursday that risks to its outlook for the economy are "broadly balanced" after downgrading forecasts for growth in the wake of what was expected to be a knife-edge decision on whether to cut Bank Rate or leave it unchanged.