- 'Hard' assets to do well as global backdrop worsens

With stock markets in free fall on recessionary fears and bond yields falling ever deeper into negative territory investors are hard pressed to decide where to invest their capital.

The answer? Look to 'hard' assets such as gold, says Alberto Gallo, head of global macro strategies at Algebris Investments.

“We prefer to have hard assets or things that are linked to hard assets. Gold is one of the best performing hard assets this year. And invest in countries where real rates of inflation are still high like some emerging markets, like Russia, Mexico or Brazil,” says Gallo.

Gold has risen roughly 18% this year from an open of $1297 to a current price in $1530s per ounce, mainly on the back of global growth fears. Gold is a safe haven asset which investors buy when they become fearful of the outlook for the economy.

Investor pessimism about long-term growth prospects is at the back of the increased demand for gold. These fears were reflected in the news on Wednesday that the U.S and UK yield curves have inverted for the first time since 2007.

An inverted yield curve is also a recessionary bad omen in the more immediate medium-term of 1-3 years, suggesting investors are likely to grow more rather than less risk averse - a considerable boon for gold. 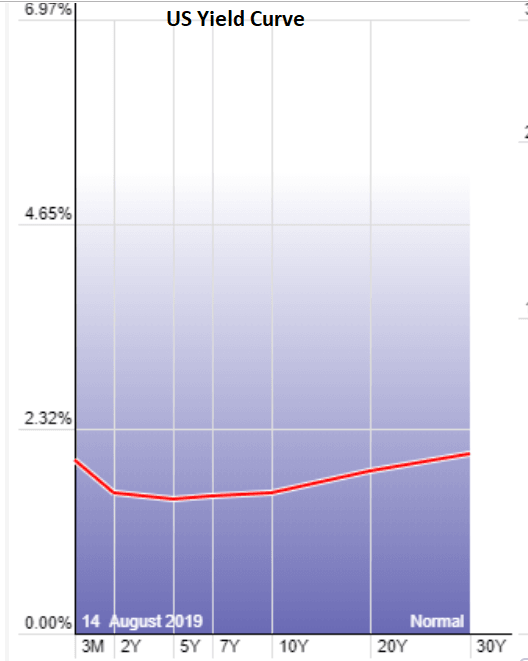 Continued yield curve inversion is perilous for the world financial system as it prevents banks from going about their usual business of borrowing at a low short-term rate and lending the money out to companies and individuals for a longer period at a higher rate.

Or as Jonathan Golub, chief equity analyst at Credit Suisse elegantly put it: “If you are a bank borrowing money overnight or for 1 month, you are borrowing more expensive than you are lending it out for 4 years; why would a bank want to lend money at a loss?”

Golub adds: “or look at an individual, who may want to - as they roll over their bond portfolio - decide to leave it in a 1 month bank CD instead of going and investing it in a municipal bond for 4 years. That means that when you have a yield curve inverted the way this is, it drains liquidity out of the markets.”

Continued inversion normally leads to a credit crunch as happened in 2008, a year after the last inversion of 2 and 10 year rates. This in turn resulted in the collapse of Lehman brothers and the triggering of the subprime crisis, as banks stopped lending both to businesses and to each other.

This explains why market expectations are so dovish in relation to the Federal Reserve (Feds), with Feds Funds futures now pricing in a 100% probability of a rate cut of at least 0.25% in September - the Fed has to cut to lower short-term lending rates in order to steepen the curve.

Yet lower rates might also further support gold prices. A lower Fed Funds rate will probably weaken the U.S. Dollar and since gold is priced in Dollars it will naturally rise. Nevertheless, a rate cut may also reinvigorate equity markets in the short-term drawing investors back into risk.

It is no coincidence President Trump walked back his threat to widen tariffs to include all of Chinese imports on Tuesday - he may well have been responding to the increasingly ugly picture painted by the bond market.

By making exceptions to his tariff promises he may have been trying to engineer an improvement in the longer-term outlook for global growth and manipulate a rise in the lapsed longer end of the yield curve. If so it failed to have the intended effect. It seems investor perceptions of future growth are permanently impaired.

A band-aid tinkering with the scope of tariffs to exclude Christmas decorations, electronics, games, and clothes, isn’t going to offset the entrenched realisation that the global outlook for trade has probable forever changed.

The trade war is not just about balancing trade deficits. Huge advances in technology now mean the cutting edge of military technology, for example, is being developed by commercial companies for use in smartphones and car computer systems. This explains why the U.S. Department of trade and commerce came to the surprising conclusion that European car imports posed a national security threat to the U.S. We are experiencing a paradigmatic shift in global trade and nothing will ever be the same.

“Our view has been that there are three components to the disagreement (between the U.S. and China),” says Karen Ward, former advisor to the Chancellor of the exchequer and now chief market strategist at JP Morgan. “One is tariffs, one is intellectual property, but the third is essentially who is going to dominate global tech, with both sides wanting that to be their strategic growth industry. And I think on that score we have always been sceptical there will be common ground found and, therefore, that this is all going to de-escalate and end very happily.”

Indeed, China appears to be changing its strategy in relation to the U.S. to one that is less conciliatory, now making a deal even less likely. From previously trying to appease their partners they now want to play a longer waiting game, in which they hope the trade war will hurt the U.S. economy so much that President Trump will be forced to return to the negotiating table and make a deal from a weaker negotiating position.

It is not just the trade war which is likely to dampen growth prospects, the ever-decreasing impact of central bank monetary stimulus policies is also likely to take its toll, according to Algebris’s Gallo.

“Central banks are pushed to do more to maintain this level of growth that we have had but it is every time decreasing, and the impact of monetary policy is decreasing. So the patient, the economic patient, has been for 10 years under anaesthetic from QE, there is no chance this QE will be enough to make the patient recover, and the response is even more anaesthetic, so we are positioning for yields to go even lower, for paper assets to depreciate,” says Gallo.

In such a scenario the best source of security and return could be hard assets like gold, whilst some emerging market bonds may also provide a return, such as the aforementioned Russian, Mexican and Brazilian sovereign bonds.

Other investment’s recommended by Algebris’s Gallo include those which are likely to benefit from the status quo of ever-lower rates and increased central bank easing, such as large corporation shares and big tech giants like Amazon, Google and Facebook, which are relatively recession-proof, ‘monopolistic’ and sell goods at a discount.

“Markets are very polarised: bond markets, equity markets, trading markets..If you look under the hood, the valuations are consistent with a world which is long central banks but short growth,” says Gallo in an interview with Bloomberg News, adding:

“Assets that require a pick-up in growth momentum like small caps, for example, or emerging market equities are not being bought by investors and unless there is a very strong U-turn in the trade war, that is not going to change. Assets that bet on yields being lowered by central banks or more liquidity are still doing very well. From gold to large caps, to companies that are monopolistic, including some of the tech companies, and this is the status quo. We don't think the trade war disappears, at least for the next 3-6 months. If Trump wants a victory it would probably be in Q1 or Q2 next year, just before elections. The status quo, however, will remain QE infinity.”