- UK economy roars back in Q1 on services, manufacturing boost.

- But current account and trade deficits grow amid Brexit stockpiling.

- Economists warn of 0% growth in Q2: a contraction could be likely.

The UK economy roared back to life in the first-quarter after having slowed sharply at the end of last year, the Office for National Statistics confirmed Friday, although other data showed both trade and current account deficits widening sharply in the first three months of the year.

UK GDP growth was 0.5% in the first-quarter, up from 0.2% in the final three months of 2018, which marks the first time in five years the economy has gained momentum heading into a New Year rather than losing it.

Increased activity in the manufacturing and services sectors was behind the increase, with firms having seen production pick up notable ahead of the original March 29 Brexit deadline as companies sought to stockpile components and finished products in case of disruption at ports. Consumer spending was also a big contributor. 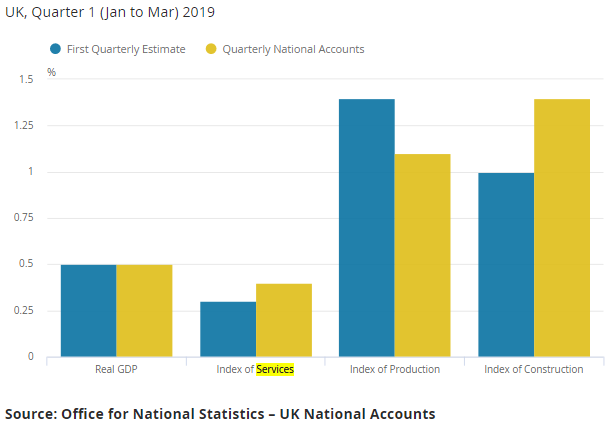 "The national accounts show that households weren’t fazed in Q1 by the possibility of a no-deal Brexit at the end of March. The 0.6% quarter-on-quarter increase in households’ real spending was the biggest since Q1 2017. Admittedly, such strong growth is not sustainable," says Samuel Tombs, chief UK economist at Pantheon Macroeconomics. "Timelier retail sales data suggest growth in households’ spending slowed sharply in Q2."

"No-deal Brexit preparations meant that the inventory and net acquisition of valuables components collectively contributed 2.6pp to quarter-on-quarter GDP growth.  But the boost was fully offset by a huge 3.0pp drag from net trade, because stockpiled goods were mainly imported and because underlying consumer demand was strong," Tombs says. "The most surprising development in Q1 remains the 0.4% quarter-on-quarter rise in business investment. The increase can’t be attributed to Brexit preparations, as it primarily reflected a 3.6% jump in investment in buildings and structures." 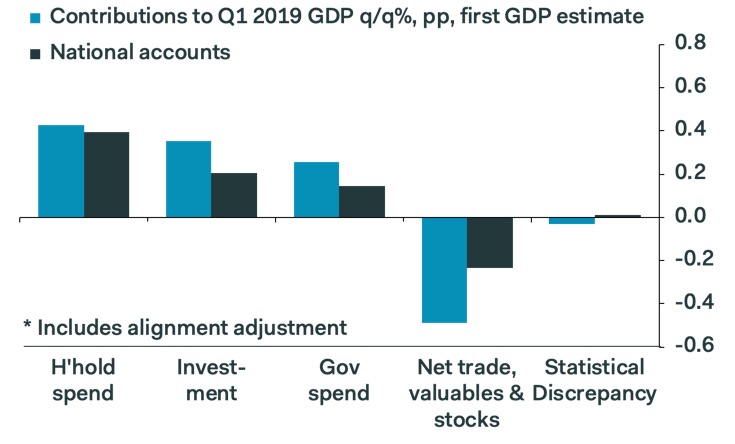 The Bank of England has said repeatedly that it'd like to raise the base rate from its current 0.75% level in order to safeguard its 2% inflation target, which has been threatened repeatedly by a consumer price index that's being propped up by volatility in oil prices and wage growth that's fuelling consumer spending.

However, the bank has been stymied from action by uncertainty over the UK's likely path out of the European Union given that exit day has now been delayed on two occasions, with the latest extension of the Article 50 negotiating window set to end on October 31.

More recently the bank has also been hindered by a slowdown in the global economy that has already hurt the Eurozone, which is a significant trading partner of the UK. Fears are that this slowdown will compound the pressure already being felt by UK companies and consumers due to the Brexit process.

In addition, the strong growth and stockpiling of manufacturers in the first quarter was not without cost because much of that extra activity was always expected to fade in the second quarter, leading to a slowdown in growth for the three months to the end of June.

"April’s GDP figures suggest that the Brexit hangover in Q2 has been heavier than we had expected. We had previously thought GDP would rise by 0.2% q/q in Q2 as a whole, but it’s now possible that GDP fails to increase at all or even contracts" says Ruth Gregory at Capital Economics. "This adds weight to our view that GDP won’t grow by much more than 1.5% or so in 2019 as a whole and that interest rates will remain on hold until at least the middle of next year." 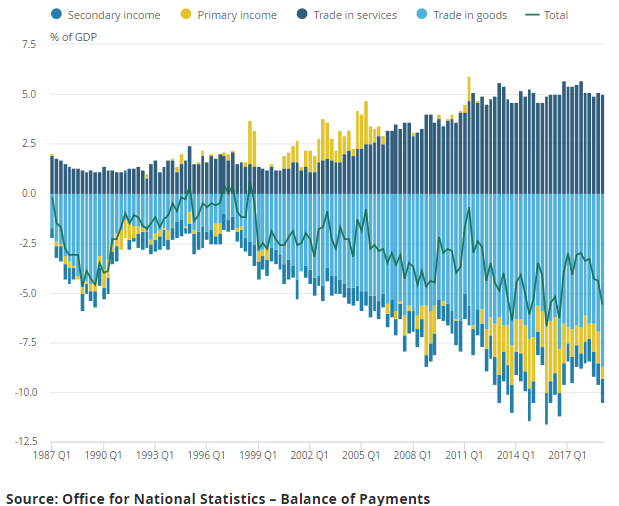 Above: Contributions to UK balance of payments/current account deficit.

Separately, the ONS said Friday the UK's current account deficit widened to £30 bn in the first quarter, up from £23.7 bn previously. This leaves the mismatch between capital inflows, outflows and liabilities between the UK and the rest of the world at some 5.6% of GDP, which is the fifth highest on record.

"That was mainly due to a widening in the trade deficit. But this was mainly due to a large import of unspecified goods, in particular gold bullion, most of which will probably be reversed in Q2. It may have also been partly due to activity brought forward ahead of Brexit," says Capital Economics' Andrew Wishart.

Currency markets care about the data as it paints a telling picture of international demand for a currency and provides insight into the extent to which a nation is exposed to the changing sentiments of international investors.

With foreign direct investment and portfolio securities put to one side, the other key component of the current account is the trade in goods and services balance. Trade balance data measures the difference between imports and exports.

Currency markets care about trade balances because the data provides insight into supply and demand of a currency in the "real economy", while also giving a steer on the likely pace of GDP growth in a given period.