- BoE holds rates at 0.75% but reiterates commitment to hikes.

The Bank of England (BoE) reiterated its commitment to raising UK interest rates over the coming quarters on Thursday, in stark contrast to the stance of other developed world central banks, but the outlook for rates and the economy is hinged entirely on the outcome of the Brexit saga playing out in Parliament.

The Bank of England left Bank Rate unchanged at 0.75% in March following what was a unanimous decision taken by the Monetary Policy Committee. All nine MPC members voted to hold rates steady this month.

Thursday's statement from the BoE said UK economic data has been "mixed" over the last month but that it still believes the economy is on course to slow modestly in the short-term, before recovering to a faster pace next year.

Despite that, the bank upgraded its forecast for first-quarter GDP growth, lifting it from the 0.2% projected back in February, to 0.3%. The new forecast is in line with the BoE's assessment of the Eurozone.

"Employment growth has been strong, although survey indicators suggest that the outlook has softened. Most indicators of consumer spending are consistent with ongoing modest growth. As the Committee has previously noted, short-term economic data may provide less of a signal than usual about the medium-term growth outlook," the BoE says, in its latest update.

The BoE also noted that the "broad-based" softening of the global economy has continued apace since its last meeting which, presumably, it sees as a risk to the UK economy. However, the BoE made clear that it thinks the most important influence on the UK outlook will be the outcome of the Brexit process.

"The economic outlook will continue to depend significantly on the nature and timing of EU withdrawal, in particular: the new trading arrangements between the European Union and the United Kingdom; whether the transition to them is abrupt or smooth; and how households, businesses and financial markets respond," the BoE adds.

BoE rate policy has taken a back seat for financial markets in recent months because Monetary Policy Committee members have long said they want to know the outcome of the Brexit process before taking action on what many say are mounting inflation pressures within the economy.

The orange line in the below graph provides an idea of roughly where the Pound-to-Euro rate could trade if and when markets are able to move on from Brexit and focus simply on the relative interest rate outlooks for the UK and Eurozone. But that assumes no change in Eurozone rate outlook in the interim.

"While the MPC thinks the economy is still performing broadly in line with its February forecast, there were signs that it thinks interest rates might have to rise a bit sooner than it did in February if Brexit is smooth. Despite the Committee’s assessment that the global backdrop remained weak, and that Brexit has continued to weigh on investment, it revised up its Q1 GDP growth forecast," says Andrew Wishart, an economist at Capital Economics. 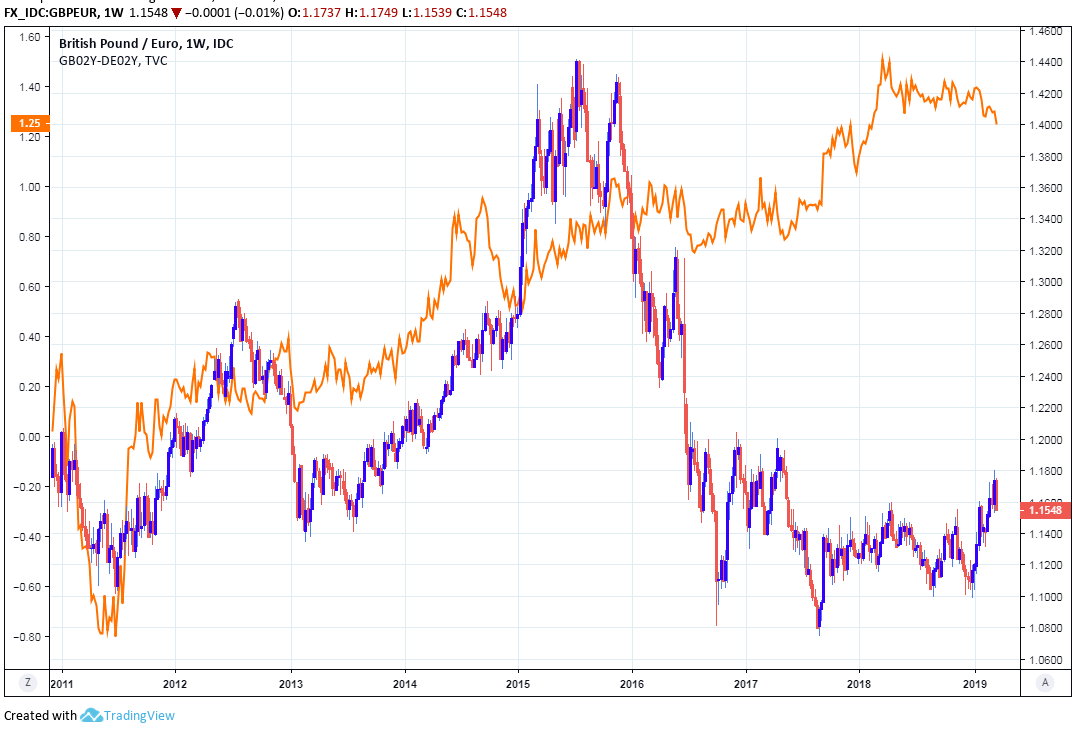 "Most MPC members still appear to believe that little time can be wasted after Brexit uncertainty has diminished, given that GDP growth currently is only a little below its trend and should pick up, interest rates still are well below neutral and policy changes take time to affect the economy. The envisaged tightening, however, still is expected to be “limited and gradual”," says Samuel Tombs, chief UK economist at Pantheon Macroeconomics.

Although the BoE states that its interest rate response to any given Brexit outcome would not be "automatic", economists have long claimed that Brexit is the diffrence between rate hikes and rate cuts. Most still suggest a "Brexit deal" will be followed by hikes, and a "no deal Brexit" will be followed by cuts. However, not all are on board with that narrative.

"The implied probability of a rate hike before the end of the year has dropped even further, but this is primarily related to yesterday’s FOMC decision," says Stefan Koopman, an economist at Rabobank. "The market is rightly questioning whether the BoE dares to go against the Fed. We expect the MPC to sit tight for a while and forecast no rate hikes for the remainder of this year."

Inflation rose to 1.9% in February, according to Office for National Statistics (ONS) data released Wednesday, when markets had looked for it to hold steady at 1.8%. The consumer price index is now, and once again, threatening the BoE's 2% target.

Core inflaiton, which economists say is the better measure of price pressures, dipped from 1.9% to 1.8% that month. However, ONS data released Tuesday also showed wages continuing to grow at a decade-long high.

Real pay growth is rising again too, given that inflation is falling. The BoE has long feared household pay increases that could push the consumer price index above its 2% target. Interest rate hikes are one way to combat rising inflation.

UK retail sales rose by 0.4% in February, according to ONS data released Thursday, when markets had looked for a -0.4% contraction. That followed downwardly-revised gain of 0.9% for January.

"Reflecting a slightly greater-than-expected recovery in output in January, Bank staff now expected GDP to grow by 0.3% in 2019 Q1, marginally stronger than in the February Report. That was despite a marked weakening in business survey indicators of output since the start of the year," the BoE's minutes say. 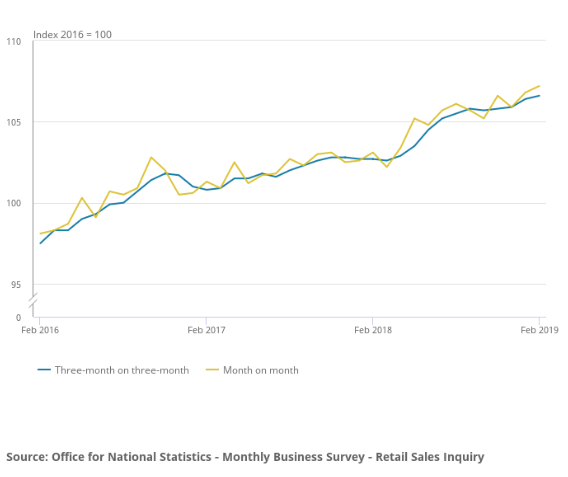 Above: UK retail sales growth on a month-on-month (yellow) and three-month-on-three-month basis.

Economists and IHS Markit PMI surveys had suggested the economy stalled in the New Year as businesses and consumers retrenched in the face of "Brexit uncertainty", but most of the data emerging from the UK since has begged to differ, albeit that business investment has disappointed.

"No one knows how Brexit will pan out, but there are perhaps three distinct paths interest rates could take depending on what happens. First, if Parliament passes the deal next week the elimination of uncertainty would support a strengthening in the economy. In this case we think the MPC could raise rates four times by the end of 2020, with the first hike in August," says Capital Economics' Wishart.

Wishart and the Capital Economics team say if Prime Minister Theresa May fails to get her EU Withdrawal Ggreement through parliament and that gives way to a lengthy two-year delay to the Brexit process, the BoE will probably raise its interest rate just once this year before sitting on its hands again for another extended period.

"Despite maintaining that if the UK leaves without a deal next Friday the monetary policy response to Brexit would not be automatic in the statement, in recent speeches the MPC has softened its line that it might have to hike. We think the MPC would cut rates to 0.25% at the next scheduled meeting in May if not at an emergency meeting beforehand," Wishart writes, in a note to clients.