- CAD rises with oil and as markets cling to hopes of a NAFTA deal.

- Congressional deadline passes but July 01 is a more important date.

The Canadian Dollar rose across the board Friday as oil prices eged higher and markets held onto hopes that an agreement can be reached on the future of the North American Free Trade Agreement, despite a deadline for a deal to be reached having elapsed on Thursday.

Friday's price action comes ahead of the latest round of Canadian inflation figures, which are important for market expectations around Bank of Canada monetary policy. Oil prices are important for the Canadian Dollar because oil is Canada's largest export.

It also comes after US House Speaker Paul Ryan said last week that US, Mexican and Canadian negotiators have until the end of Thursday 17, May to agree a new NAFTA deal if they want it to be passed through the US Congress before January 2018, which is when the new Congressmen elected in the November midterms will take up their seats. It goes almost without saying that this deadline passed without a deal being announced.

“The Nafta countries are nowhere near close to a deal...We of course will continue to engage in negotiations, and I look forward to working with my counterparts to secure the best possible deal for American farmers, ranchers, workers, and businesses,” US trade representative Robert Lighthizer was quoted as saying Thursday, by the FT.

The deadline was important for currency markets because recent history shows the ruling party tends to lose seats in a midterm election year, which means Republicans are at risk of seeing their already-narrow majorities in the House of Representatives and the Senate evaporate, which could complicate the process of ratifying a new deal.

“The current NAFTA is a seriously flawed trade deal, and the Trump Administration is committed to getting the best possible trade agreement for all Americans. The United States is ready to continue working with Mexico and Canada to achieve needed breakthroughs on these objectives. Our teams will continue to be fully engaged,” Lighthizer said in a statement earlier this week.

However, all of that being said, President Donald Trump would always have the option of using Oval Office powers to terminate the existing NAFTA deal before putting the new one before Congress at a later date. This would mean opposition lawmakers face a choice between approving the new deal or having no NAFTA pact at all, which might induce them to ratify agreement.

"The third favourable development for the Canadian dollar is the building expectation that NAFTA will be renegotiated successfully and could even be ratified by US Congress before the end of this year using the “fast track process”. It would be consistent with President Trump’s positive rhetoric on NAFTA so far this year," says Lee Hardman, a currency analyst at MUFG.

July 01 represents another deadline for a deal to be struck, this time a slightly firmer one, when Mexicans will go to the polls to vote for a new President.

The vote will see incumbent President Enrique Pena Nieto, who is prohibited by the Mexican constitution from running again, replaced with ruling Institutional Revolutionary Party (PRI) candidate Jose Antonio Meade or by opposition candidate Andres Manuel Lopez Obrador, who has campaigned heavily on an anti-corruption ticket and is a firm favourite in opinion polls to win the presidency.

Local media coverage of the Mexican election shows Obrador has said very little about how he would handle the NAFTA negotiations beyond stating that he would put President Trump "in his place". He has also called for talks to be suspended until after the election because, according to a CBC report, the "weak" incumbent president is in danger of "selling out" the country.

"A delay in NAFTA talks embolden our conviction that the path of least resistance remains higher for USDCAD particularly against a backdrop where the USD is likely to retain its newfound mojo and Canada's Balance Of Payments dynamics remain a drag," says Mark McCormick, North American head of FX strategy at TD Securities. 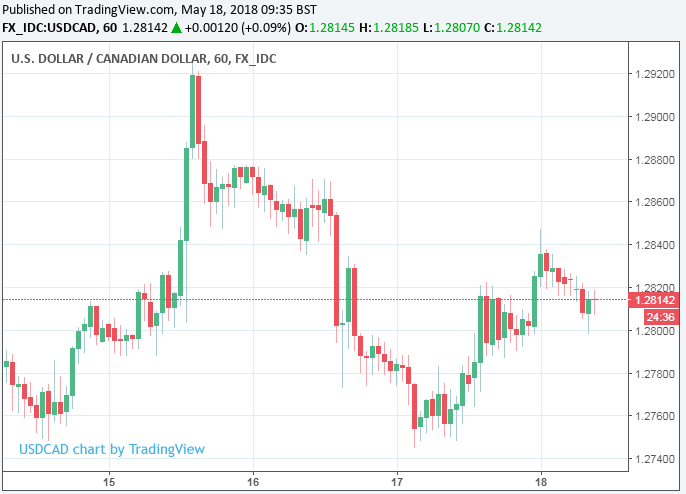 Negotiating a new NAFTA deal is important for the Loonie because analysts have previously estimated a withdrawal by the US could hit the Canadian economy and see the currency fall by as much as 20%. A potential withdrawal has been in the cards ever since the election of President Trump, who once described it as "the worst deal in history" while on the campaign trail and pledged to tear it up if Canada and Mexico wouldn't agree to a new deal with more palatable terms.

"While a NAFTA deal is inevitable at some point in the foreseeable future, we think we have moved past the point of peak optimism in the negotiations insofar as it being supportive for the CAD. Indeed, the latest setback just adds to the list of diminishing positives for CAD (as initially outlined in our short CADJPY position) especially as the risk of any sort of deal delayed beyond our July 1 expectation remaining a non-trivial probability," McCormick writes, in a recent briefing.

McCormick and the TD Securities team have flagged a regime change in currency markets this year, where traders are now focused on "divergence" between economies and monetary policies rather than the synchronised convergence theme that drove exchange rates back in 2017.

That regime change favours a weaker Canadian Dollar relative to the US greenback, particularly in a world where NAFTA either falls apart or where a deal is delayed. The mechanics of this are best understood by looking at the US Dollar and how it has swept away all opposition to it in recent weeks, driven by a sharp uptick in US bond yields, with 10 year Treasuries offering investors 3.1% during early trading Thursday. Canadian 10 Yr's offer just 2.52%. 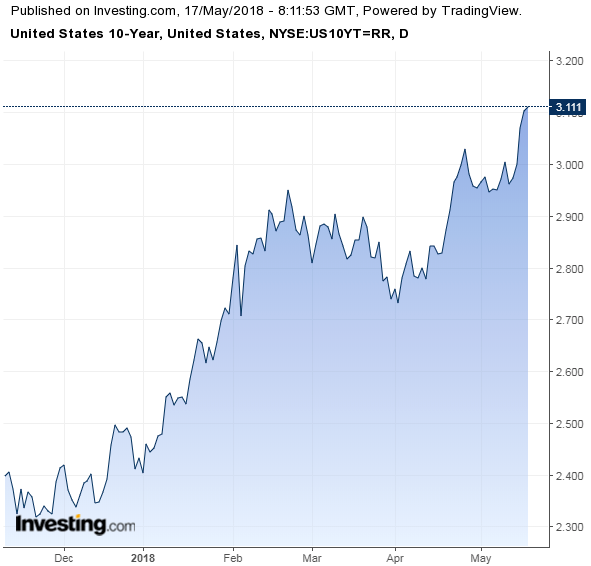 Above: US 10 Year Government Bond Yield.

This has narrowed the yield-differential between US Dollar assets and those in higher yielding parts of the world, while further widening the gap between interest returns available on US bonds and those available in low-yielding parts of the world like Europe and Japan. In other words, the regime change means investors are now incentivised to sell other developed world currencies, to buy the US Dollar and to invest in the American bond market.

"From a risk/reward point of view, this leaves us comfortably looking for additional downside in CAD. OIS markets are pricing in nearly two hikes by the end of this year (unreasonable in our view) despite the data showing faint signs of an improvement. Unless there is a stellar turnaround in growth dynamics, the CAD may have more to lose than to gain relative to what is being priced in the front-end," McCormick explains.