-NAFTA remains a risk but hopes of an April deal are rising.

-7% upside for the Loonie on succesful NAFTA negotiation.

-Weaker growth muddies the picture on interest rates and currency.

The Canadian Dollar rose sharply Tuesday as markets responded to rising hopes that a provisional deal to preserve the North American Free Trade Agreement can be reached before the month is out, which strategists say would lead to even greater upside for the Canadian currency.

President Donald Trump is reported to be pushing for leaders of Canada and Mexico to join in unveilling the broad outline of a newly negotiated NAFTA agreement at the Summit of the Americas in Peru later this April, with the precise details around major changes to the text to be agreed in private at a later date.

This comes barely a week after the Globe and Mail reported the White House has dropped a key but contentious demand on an increased "US content requirement" for cars that are shipped across the borders from Canada and Mexico into the United States.

The USD/CAD rate was quoted 0.67% lower at 1.2834 during noon trading in London Tuesday while the Pound-to-Canadian-Dollar rate was also 0.60% at 1.8040. The Canadian Dollar also notched up broad gains over all its other developed world rivals. 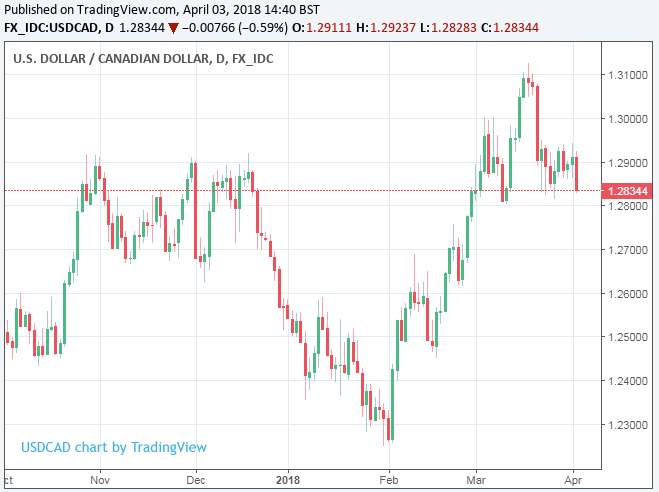 A NAFTA breakup has been and remains the most potent risk to the Canadian Dollar given the anticipated economic damage it would cause, which some analysts estimate could lead to a double digit devaluation of the Loonie.

"The Canadian dollar and Mexico peso still appear to be pricing in sizeable risk premiums to reflect ongoing concerns that NAFTA renegotiations could prove unsuccessful. It creates upside potential for both currencies if current fears do not materialize," says Lee Hardman, a currency analyst at MUFG.

US, Mexican and Canadian representatives have been attempting to thrash out a new NAFTA agreement at the behest of the White House ever since early 2017. President Trump once described the pact as "the worst deal in history" while on the campaign trail and threatened to tear it up if more palatable terms couldn't be agreed.

It is not yet clear how soon a show of unity in Peru could be converted into a signed treaty although the reports have clearly been taken by the market as a positive, perhaps because they lessen the chances that negotiations experience a six month hiatus from May for the Mexican Presidential election and US midterms. Markets have been anticipating that talks to renegotiate NAFTA would be suspended through the summer while election campaigning takes place.

"Let us be very clear that any NAFTA resolve - if indeed delivered "within two weeks' - would only be "in principle' and thus potentially envelopes a considerable amount of time to still iron out a final deal," warns Ian Pollick, head of North American rates strategy at CIBC Capital Markets.

However, currency strategists are increasingly forecasting substantial upside for the Canadian Dollar if negotiators reach a deal to preserve the NAFTA pact. The Loonie has fallen by 2% against the US Dollar in 2018, by more than 6% against the Pound and nearly 5% relative to the Euro. It could convert these losses into a 7% gain if negotiators are succesful. 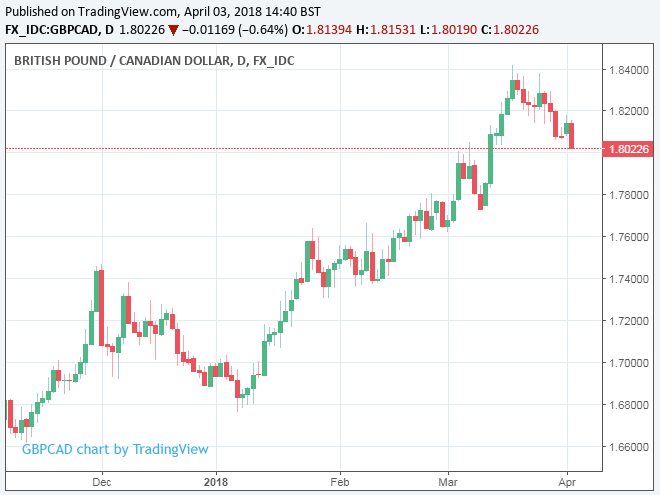 This newfound scope for a deal to be reached leaves speculators and Canadian Dollar buyers, as well as anybody else with an exposure to the currency, caught between a rock and a hard place. This is because, as much as an agreement could more than unwind the small Dollar's recent losses, without one the outlook for Canada's currency is still bearish.

"With our Q1 GDP tracking suggesting that the Bank's 2.5% is wide of the mark, we hold a short-term bullish bias on USDCAD and eye a re-test of 1.30 particularly as quarter re-balancing should be supportive for the USD," says Fred Demers, chief Canada macro strategist at TD Securities. "The economy is not quite running hot or fast enough to build into excess demand and drive further inflationary pressures later this year. This supports our call for a rate hike no sooner than July. But for that, the data will have to bottom out by then, otherwise the pause could continue well past July."

Demers touches on the next significant headwind for Canada's currency, which is a darker outlook for monetary policy. The Bank of Canada raised interest rates three times between July 2017 and January 2018 while, at the time of the last hike, markets were betting heavily that policymakers would pull off a total of three interest rate rises before year-end.

Since then things have changed and now pricing in interest rate derivatives markets suggests investors expect only one more move this year, and that they are unsure of when it will come. Strategists have given up calling for a rate hike in April and their forecasts are now increasingly converging on the July meeting.

"We think July still makes the most sense as the next likely move, especially considering the BoC is going to miss on their Q1-18 GDP forecast - the question is not if, it is by how much," says CIBC's Pollick.

NAFTA risks have no doubt contributed to the deterioration of expectations for Canadian interest rates although a slower pace of economic growth has also played a substantial role. Data showed last week that the Canadian economy economy contracted in January, for the second time since the BoC began raising rates last July, which has had an impact on economist expectations for economic growth in the first quarter.

Markets are increasingly looking for growth of between 1% and 1.5% on an annualised basis for the three months to the end of March, although the Bank of Canada has been looking for GDP growth of 2.5%.

The BoC has made clear that its own views on the future prospects for inflation are hinged largely on the growth outlook so fears are that the recent economic performance will lead rate setters to reduce their forecasts for Canadian inflation. This would all but remove the impetus for another rate rise any time soon and could create a further headache for the Loonie.