The Pound to Canadian Dollar exchange rate has retreated from January highs and could be likely to consolidate its earlier gains this week unless the Bank of Canada (BoC) calls time on its interest rate cycle this Wednesday.

Sterling was an underperformer on Monday following gains over all comparable counterparts in the prior week while the Loonie was steadier on its feet having underperformed alongside the U.S. Dollar and Japanese Yen last week.

Last week's underperformance by the Loonie came in the wake of softer inflation figures and a Business Outlook Survey suggesting the BoC is successfully dampening domestic price pressures, although Wednesday's BoC decision is almost all that matters for the Canadian Dollar this week.

"Overall economic growth did cool off in the fourth quarter of 2022, but the pace of increase will still surpass the central bank’s October forecast by a wide margin," says Royce Mendes, head of macro strategy at Desjardins.

"With all that in mind, it would be hard to argue that there was enough evidence to halt rate hikes just yet," Mendes adds. 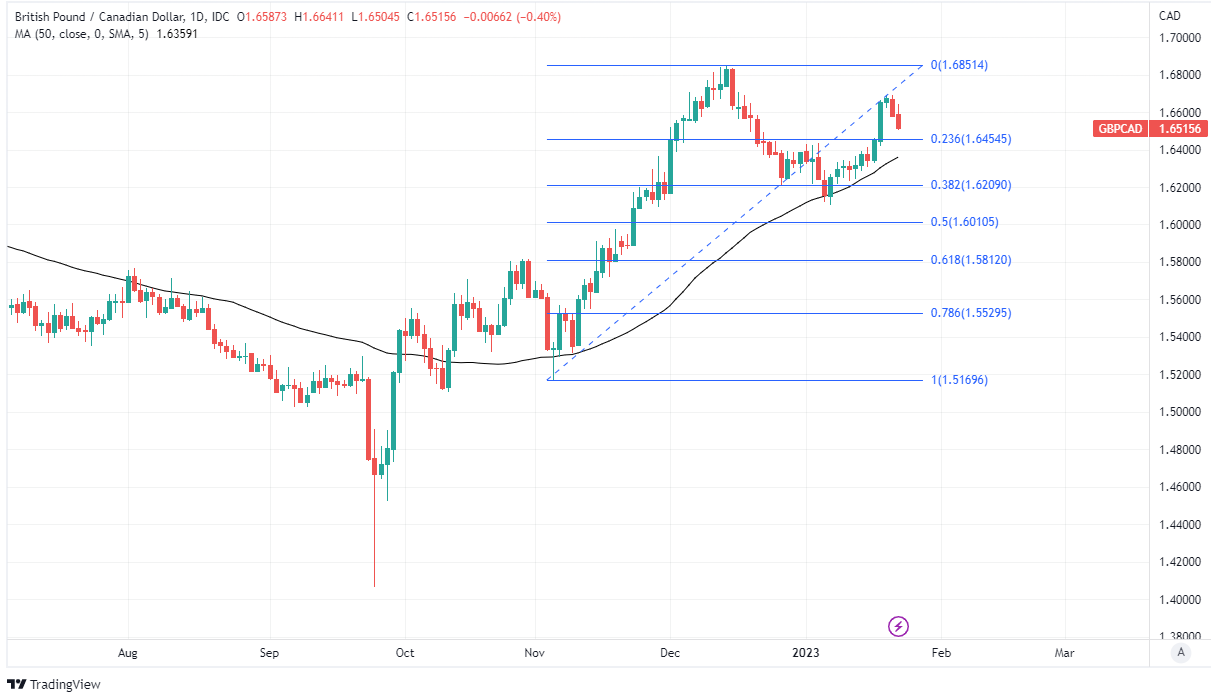 Above: Pound to Canadian Dollar rate shown at daily intervals with 55-day moving-average and Fibonacci retracements of November rally indicating possible areas of technical support for Sterling. Click image for closer inspection. If you are looking to protect or boost your international payment budget you could consider securing today's rate for use in the future, or set an order for your ideal rate when it is achieved, more information can be found here.

Market-implied expectations suggest a strong possibility of another increase taking the BoC cash rate up from 4.25% to 4.5% on Wednesday but also acknowledge a non-negligible risk of the bank leaving borrowing costs unchanged following the 400 basis point increase of last year.

This is partly because the BoC said last month that it would spend the time between December and January "considering whether the policy interest rate needs to rise further to bring supply and demand back into balance and return inflation to target."

"A simple average of the two key core indices – trimmed core and weighted median core – show annual price increases still over 5%; this average has been above 5% in each of the last eight months," says John Velis, an Americas FX and macro strategist at BNY Mellon.

"Add in a labor market that remains extraordinarily tight and a BoC that is worried about a wage-price spiral and we don’t see the BoC in a position to stop hiking this month," Velis writes in a Monday research briefing.

The uncertainty about whether another increase can be expected on Wednesday means the Canadian Dollar might benefit if one is delivered, and more so if the BoC stops short of announcing that it does not intend to raise borrowing costs any further in the months ahead. 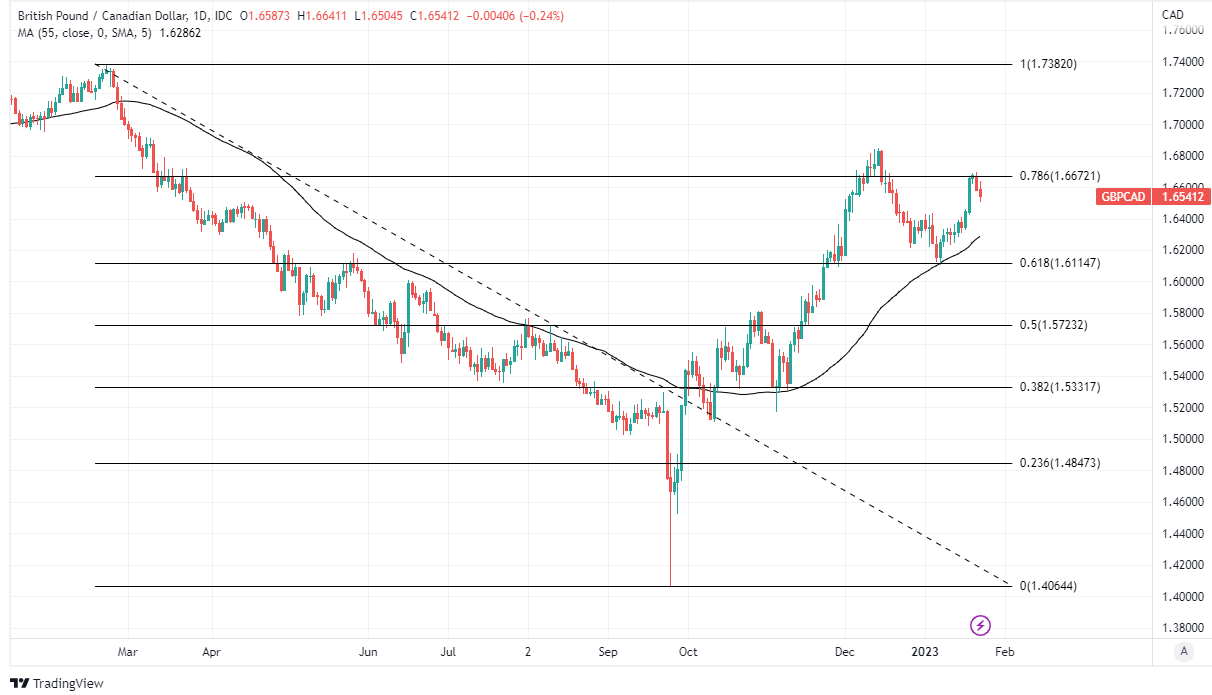 Above: Pound to Canadian Dollar rate shown at daily intervals with Fibonacci retracements of 2022 downtrend indicating possible areas of technical resistance for Sterling. Click image for closer inspection. To optimise the timing of international payments you could consider setting a free FX rate alert here.

"Though broader inflation trends are still running above the Bank of Canada’s 1% to 3% target range, they’ve already shown clear signs of losing steam. And the lagged impact of the 400 basis points of BoC rate increases in 2022—the most aggressive hiking cycle in decades—is still filtering through," he adds.

While a Wednesday increase in the cash rate may hamper the Pound to Canadian Dollar rate this week, any surprise decision to leave the benchmark unchanged might be enough to enable Sterling to attempt a recovery in the direction of its mid-December high just above the 1.68 handle.

Meanwhile, and in what is mostly a quiet week for the UK economic calendar, Sterling and GBP/CAD could also potentially benefit if Tuesday's S&P Global PMI surveys of the manufacturing and services sectors provide further signs of the downturn in both industries beginning to slow.

"In line with our forecast for a gradual fall in activity over Q1 (fc. -0.2% q/q), we expect the composite PMI to edge slightly lower to 48.8 (prev. 49.0). We expect the unusually wide gap that has emerged between manufacturing and services PMIs to start to narrow," says Abbas Khan, an economist at Barclays.

"We forecast manufacturing to improve to 45.7 (from 45.3) as the easing of supply bottlenecks provides a tailwind to production. In contrast, we expect services to nudge slightly lower to 49.5 (prev. 49.9) as higher energy bills and households' experience a loss in disposable income," he adds.