Economists at National Bank of Canada (NBC) have updated clients with their latest Canadian Dollar forecasts.

"Despite the recent decline in commodity prices, our model shows that the Canadian currency is still significantly undervalued," say economists Stéfane Marion and Kyle Dahms at NBC, in an August exchange rate forecast update. 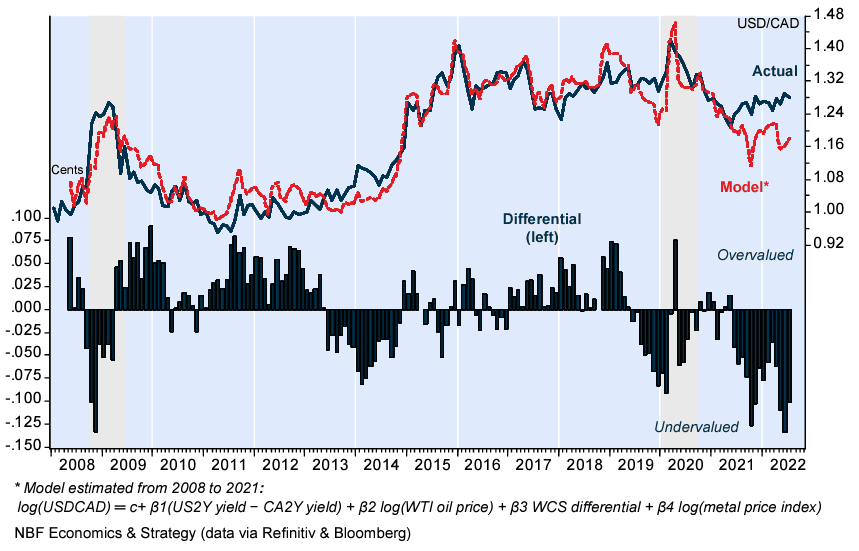 Economists say the Bank of Canada's (BoC) outsized 100 basis point hike in July reflects the central bank's frustration with its efforts to rein in inflation, and ultimately more hikes should be expected.

Looking ahead, NBC however don't expect a further 100 basis point hike from the BoC, instead expecting a 75 bps at the September 07 policy meeting.

"The resulting policy rate, at 3.25%, would then be in mildly restrictive territory before summer is out. Is this moving too fast for the Canadian economy to avoid a recession?" asks Marion and Dahms.

They note Canadian home sales are already down sharply and job creation is disappointing: instead of rising 15K as per consensus, Canadian employment fell 30.6K in July, marking a second consecutive decline for this indicator.

But NBC say it is too soon to be concerned with Canada's employment situation with the headline figures masking more benign trends:

Job losses have been concentrated among workers aged 55 and over and unforced retirements, not layoffs, seem to be the main cause of this reduction according to the economists.

"This surge likely reflects a resorption of retirements accumulated in 2021 as a result of generous government wage subsidy programs and the ability to work at home that temporarily boosted the labor force participation rate of older workers," says Marion and Dahms.

"With the unemployment rate remaining historically low and with labour shortages continuing to persist according to the latest figures by the CFIB, we still see enough resilience in the Canadian domestic economy to justify higher interest rates," they add.

This should keep Canadian bond yields elevated and ultimately support the Canadian Dollar, which is currently the second-best performing major currency of 2022 after the U.S. Dollar.

"Given our expectation that WTI oil prices should stabilise around $90 per barrel, we still see USD/CAD converging to 1.22 in the coming quarters as the oil/loonie correlation turns positive again," says Marion and Dahms.